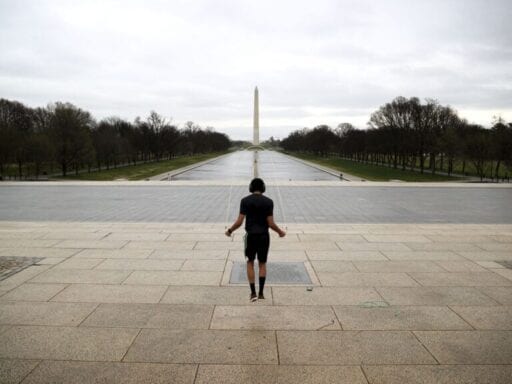 And what else you need to know today.

The White House will host a briefing at 11:30 am Eastern Tuesday, as the scope of the coronavirus pandemic grows ever wider. On Monday, the US recorded the most coronavirus deaths in a single day — 18 — and the case toll continues to grow.

The Centers for Disease Control and Prevention is now discouraging gatherings of 10 or more people, and is urging people to avoid domestic travel. San Francisco has joined countries Europe in demanding its residents shelter at home. Life is wildly, drastically, changing, and for how long still remains uncertain.

“The worst is ahead for us,” Dr. Anthony Fauci, the director of the National Institute of Allergy and Infectious Diseases, said Monday. Given that, we’ve attached a good news item to the end of the news roundup, because we all really need it right now.

Here’s what else to know today.

The White House recommended Monday that Americans avoid gatherings of 10 or more people, much tighter restrictions than the CDC had recommended (gatherings of 50 or more) just the day before.

President Donald Trump, taking perhaps the most straightforward tone he’s had throughout this entire crisis, also urged Americans to avoid discretionary travel, to work from home when possible, and to avoid going out to bars and restaurants.

None of this is mandated, but the social distancing recommendations are what Americans need to hear right now. States and localities, however, have gone further, shutting bars and restaurants, except for delivery or takeout. But none more so than San Francisco.

San Francisco goes the way of Italy with a lockdown

In San Francisco, Mayor London Breed announced dramatic measures — the tightest in the nation so far — to try to curb coronavirus transmission. The restrictions are similar to those in place in Italy right now.

Under the order, residents will only be allowed to leave their homes for essential needs, like to buy groceries or medicine. All “nonessential” businesses will stay shut. People can still go outside — walk the dog, or exercise — but they are asked to stay at least 6 feet away from each other. Those who violate the orders can face a misdemeanor charge, though the city’s top police official said this was the option of the last resort.

“This is going to be a defining moment for our city,” Breed said Monday. “We all have a responsibility to do our part to protect our neighbors and slow the spread of this virus by staying at home unless it is absolutely essential to go outside.”

Five other counties in the Bay Area are also under the same stringent restrictions, which will go into effect Tuesday at midnight. So maybe don’t go to Costco right now.

Billions in economic stimulus may be coming next

The White House is reportedly going to ask Congress for an $850 billion economic aid package to help the US economy recover from the coronavirus shock. According to the Washington Post, Treasury Secretary Steven Mnuchin is expected to give a preview of the package to Senate Republicans on Tuesday, which will include massive economic stimulus, potentially in the form of a payroll tax cut, and about $50 billion in assistance for the struggling airline industry.

Neither Democrats nor Republicans had an appetite for a payroll tax cut as recently as last week, but that may change as the economic outlook looks grimmer by the day. Then again, there have been some other proposals floating out there, including a proposal from Sen. Mitt Romney (R-UT) to give every American $1,000, which sounds suspiciously like Andrew Yang’s universal basic income plan.

Wall Street seems to be somewhat soothed by the prospect of economic stimulus, rising slightly in the first hours of trading. It won’t be enough to make up for the Dow Jones’s biggest point drop in history on Monday, but it’s something.

Some good news to get you through the day

Everything is shut down, but that meant a couple of penguins at Chicago’s Shedd Aquarium finally got the run of the place, and went to visit all their friends.

oh my god, the chicago aquarium closed due to coronavirus, so they let the penguins run around and check out the other exhibits. (staff was present.) pic.twitter.com/YGa8CugymE

The White House projects 100,000 to 200,000 Covid-19 deaths
Georgia is experiencing its “worst surge” of Covid-19 ahead of the Senate runoffs
The 2020 vice presidential debate
At home with YouTube’s favorite yoga teacher
Did Brazilians vote against democracy on Sunday?
Ben Shapiro’s revealing explanation for Donald Trump’s rise: it’s all Obama’s fault