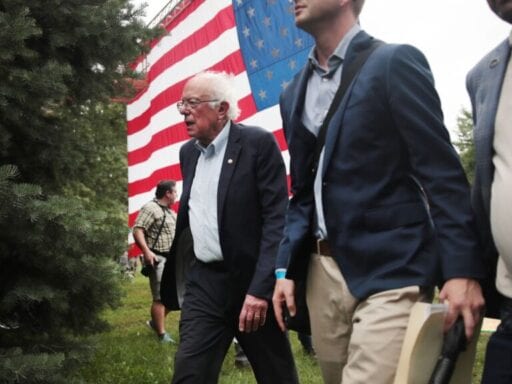 The Sanders campaign says Biden is their top priority. But some are going after Warren.

Bernie Sanders won’t say why voters should pick him over Elizabeth Warren. But some prominent voices in his campaign are explicitly going there.

Briahna Joy Gray, Sanders’ national press secretary, tweeted about the Warren campaign’s unionizing effort, which is still under contract negotiation. Under a Sanders presidency, she wrote, “Warren’s campaign would be subject to compulsory mediation for failure to reach a collective bargaining agreement. There is only one campaign that has put its money where its mouth is [with respect to] organized labor.”

In another tweet, Gray criticized Warren for not supporting a national rent control initiative.

“I don’t understand why anybody goes to all the trouble of running for president of the United States just to talk abt what we really can’t do and shouldn’t fight for.” – @ewarren

Bernie says yes to natl rent control bc we can, we should, & we must.

That’s not how Sanders himself sounds: “Elizabeth is a friend of mine and you will make that decision yourself,” he told a New Hampshire voter in August who was asking why they should vote for him over Warren. Sanders and Warren have repeatedly teamed up on the debate stage to defend their progressive policies.

The campaign’s official position is that their primary focus is going after Joe Biden, as Sanders’ pollster Ben Tulchin told Huffpost, sharing a text message script aimed at persuading Biden voters. But several members of Sanders’s team haven’t been sticking to that same script.

Sanders’ team has identified a series of progressive policy litmus tests around housing, climate, and education policy to cast Sanders as the true candidate for the left and convince voters, including 2016 supporters who might have started to consider Warren as another option. And some prominent Sanders staffers like Gray, and senior adviser Warren Gunnels, have taken to social media to highlight the differences between the two senators. Over the weekend Sanders, himself, held a 4,000-person rally in Warren’s hometown of Norman, Oklahoma, with the message that he could win.

Warren’s staff isn’t throwing the same punches (her campaign declined to comment for this story). And Sanders’ team says this isn’t part of their explicit strategy.

“While elites and political pundits are busy obsessing over tweets, our campaign is building a movement to lift up working class Americans and transform our economy so it works for all of us,” Sanders campaign spokesperson Mike Casca told Vox in an emailed statement.

Sanders and Warren have been duking it out for second place in early 2020 polls (and for first place in some state polls), an indication progressive voters are beginning to split between the two, and there’s a palpable frustration among some in Sanders’ team that their campaign’s successes are being overshadowed by a fellow progressive who has staked claim as a grassroots “plans candidate” in the media.

While the campaign has publicly identified Biden as their strategic priority, the mixed messaging from some in Sanders campaign is an acknowledgment of Warren’s rise in the Democratic primary field.

Sanders often describes his campaign’s policy platform in the same way: his campaign has put out the boldest, most comprehensive, biggest [insert policy here].

Through these plans, the Sanders campaign has tried to create progressive litmus tests for the rest of the field, calling on campaigns to reject insurance and drug company donations, join in the call for a federal fracking ban, and so forth. The campaign, and Sanders himself, have explicitly drawn contrasts with Biden, calling out the former vice president by name. But several staffers, from his press secretary to members of Sanders’ policy team, have also applied these tests to Warren.

When Warren released her climate plan — which her campaign said is still a work in progress — that included only $3 trillion in investment, compared to Sanders’s $16.3 trillion in total, staffers pointed out that Sanders was the only candidate that included a national ban on fracking, as well as a moratorium on fossil fuel infrastructure and expanding the fossil fuel export bans. Warren’s campaign had previously called for limits and regulations to fracking on public lands, but it told Vox she also supports a full ban on fracking, though it was not in their climate plan.

After Warren released her plan for higher education in April — a $1.25 trillion tuition-free college proposal paired with a plan to cancel America’s student college debt for more than 75 percent of Americans — Sanders’s team put out a $2.2 trillion proposal in June cancelling all student debt. It’s a signature issue for both campaigns. Even though Sanders’s plan is certainly bigger in scope, it was critiqued for opening up student loan debt relief to wealthy people.

On housing, Sanders is calling for a national rent control initiative and an overall $2.5 trillion investment toward building public units, increasing affordable options and ending homelessness. But on rent control, Warren has said one size doesn’t fit all. Instead, she wants to take into account price variations in different housing markets rather than trying to put in a single, national standard.

“Writing a rent control plan in Washington may work for Chicago but it’s not going to work for Iowa City,” Warren said at a presidential forum with progressive advocacy group Iowa Citizens for Community Improvement, which has advised on policy for both Warren and Sanders.

Gray, the Sanders campaign’s national press secretary, responded with Warren’s own quote, once directed at Rep. John Delaney (D-MD) on the debate stage for deriding Medicare For All.

There are some ideas that Warren popularized on the presidential campaign trail first. Nine months after Warren came out with her signature policy — a wealth tax on assets more that $50 million — Sanders did the same, expanding the proposal even further.

Sanders didn’t back a wealth tax in his 2016 run, coming around the idea two years ago as a way to pay for Medicare For All, as Politico reported.

The adversarial tone against Warren is not universal within the Sanders campaign, and it’s not coming from Sanders himself, who has shied away from questions aimed at drawing contrast. David Sirota, Sanders’ speechwriter, has publicly brushed off the notion of their being a zero-sum game between the two of them.

I’ve known both @BernieSanders and @ewarren for years. They are both great. It’s weird that we are now in the phase of the election where some people are trying to pretend you somehow cant like both of these great people.

But as a broader debate between Sanders supporters and Warren supporters spells out tensions within the progressive base of the party, it’s certainly gaining attention.

Warren is really neck-in-neck with Sanders in the polls

Both Sanders and Warren often say they don’t pay attention to polls, but national and state polls are showing a fairly clear picture: Warren is slightly edging out Sanders in the polling average, but both candidates are still trailing Biden.

While Selzer’s poll is considered the gold standard of Iowa polling, people have pointed out the poll’s sample size included 602 likely Democratic caucusgoers, so it’s not very large. But Warren has been either in first or second place in Iowa.

In New Hampshire, a fiercer battle is playing out between Sanders and Warren. In 2016, Sanders swept the New Hampshire primary by a huge margin. An early September poll from Franklin Pierce University found Sanders in first place in New Hampshire at 29 percent, ahead of Biden’s 21 percent and Warren’s 17 percent. An Emerson College poll also conducted in early September found Biden in first place at 24 percent, Warren trailing slightly at 21 percent, and Sanders in third with 13 percent. Another CBS/YouGov poll in late August/early September found a much closer race between the three.

In other words, there is a very real competition in Biden/Warren/Sanders triumvirate. And while Sanders still has some die-hard supporters left over from 2016, others are looking around for other choices — and increasingly, they’re looking at Warren.

“They’re not wedded to people, they’re wedded to values,” said progressive radio host Arnie Arnesen, a longtime political figure in New Hampshire who hasn’t endorsed either Sanders or Warren. “If people can do it just as well as Bernie, they’ll consider them.”

But Sanders still has his strong base.

“I’m kind of interested in Elizabeth Warren, but Bernie’s forever like this — no wavering,” Sanders supporter Kacey Marsh of Whitefield, New Hampshire told Vox this summer at a Sanders event. “We don’t deserve him.”

Sanders and Warren are clearly two separate human beings, with two very different political stories. But for several months there’s been a debate: are they interchangeable as progressive leaders?

I really disagree here. People can support Sanders or they can support Warren, but there are very genuine ideological differences between them and it frustrates me immensely that some remain intent on insisting otherwise

Warren and Sanders have had to answer to this longstanding argument among pundits. And there are some clear differences. Warren will quickly point out that Sanders is a self-avowed democratic socialist (although there’s a debate about that, too). She, on the other hand, is a capitalist who believes in markets, as long as they are strongly regulated.

Both candidates are calling for a political agenda that they say will need a grassroots movement to enact. But they have clear differences in tone; Sanders explains his vision with sweeping moral directives, while Warren is known for her more wonkish approach to structural change.

Among the people who ultimately matter — voters — their takeaway messages can sound very similar: Both see unfettered greed gnawing away at the country’s middle class. Both have aggressive agendas targeted at Wall Street. They both have progressive wealth taxes to pay for a bigger social safety net.

Sanders and Warren both publicly support a single-payer Medicare For All health care system, though Sanders has been more in the weeds of the political fight around his signature policy than Warren has. They have similar proposals to make public college tuition free. They both want to raise the minimum wage to $15 an hour. Both have been strong supporters of unions and the labor movement.

And at least one of Biden’s billionaire donors has painted Warren and Sanders with a similar brush. Billionaire real estate and casino magnate Neil Bluhm told attendees at a recent Biden fundraiser that Sanders and Warren “don’t represent the Democratic Party” that Bluhm supports. The magnate added Biden “has the best chance of defeating Trump.”

In public arenas, like the debates, Sanders and Warren have teamed up against Biden’s push for moderation. But as their polling tallies grow more competitive, and the first 2020 contests get closer, that united front between the candidates could fracture.

Senate Republicans have already made up their minds on impeachment
The latest politically motivated retail boycott? Home Depot.
Attention has faded on the more than 20 sexual misconduct allegations against Trump
Elizabeth Warren says she lost her job when she got pregnant. Thousands of women every year say the ...
Elizabeth Warren just won an endorsement that’s making Bernie Sanders’s world really mad
A second whistleblower on Trump and Ukraine is coming forward