Sara Netanyahu, the wife of Israel’s prime minister, was just indicted for fraud 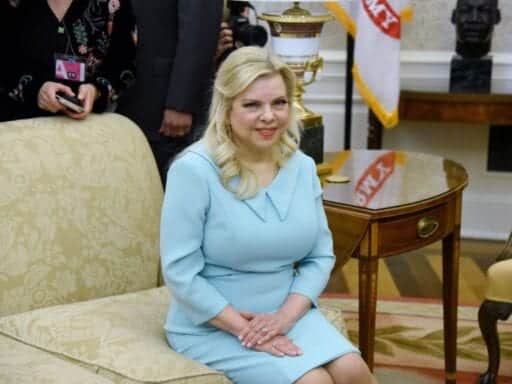 Will her husband, Benjamin Netanyahu, be next?

Israeli authorities have indicted Sara Netanyahu, the wife of embattled Israeli Prime Minister Benjamin Netanyahu, for fraud in a sordid case that has transfixed the country for several years. The question is whether her husband — President Trump’s closest Mideast ally — will be charged next.

Prosecutors have been investigating Sara Netanyahu since 2015, when reports surfaced that she’d directed staffers at the prime minister’s official residence in Jerusalem to order nearly $100,000 of catered meals from some of the country’s best-known chefs. Under Israeli law, it’s illegal to order food from outside when there is a private cook — paid with taxpayer money — already on the prime minister’s personal staff.

The indictment alleges that Sara Netanyahu falsified records and tried to hide the fact that she had a cook on staff by ordering that he be described as a maintenance worker.

Israel has a long history of high-level political corruption: Nearly every prime minister of the past 30 years has faced criminal investigations. Netanyahu’s predecessor, Ehud Olmert, was convicted in a bribery case in 2009; he’s serving an 18-month sentence in the same prison where Moshe Katsav, a former Israeli president, was jailed after being convicted of rape.

The charges against Sara Netanyahu involve crimes that seem like small potatoes by comparison, and her husband and his allies have long argued that she’s the victim of a political witch hunt.

For most of the Israeli public, however, the charges are resonating for two related reasons.

First, the Netanyahu family is widely thought to have a strong sense of entitlement and love of luxury goods; Israeli media reported that Sara Netanyahu once demanded — and received — $2,700 worth of jewelry from a wealthy Hollywood producer.

Second, and far more importantly, the prime minister himself is squarely in the crosshairs of Israeli prosecutors and law enforcement authorities.

In February, Israeli police recommended indicting Netanyahu in a pair of corruption cases; if Israeli Attorney General Avichai Mandelblit accepts their recommendations, Netanyahu would be formally charged with bribery, fraud, and abusing the powers of his office. A conviction would almost certainly send Netanyahu to prison — and open a new era of Israeli politics as Netanyahu’s many rivals line up to seek the country’s most powerful post.

The indictment only targets Netanyahu’s wife. That doesn’t mean he’s in the clear.

The new charges against Sara Netanyahu, 59, aren’t a total surprise. As I wrote in February, one of the two corruption investigations into her husband revolves around tens of thousands of dollars’ worth of jewelry, cigars, and other gifts that she and the prime minister allegedly received from wealthy businessmen — including, strangely, an Australian, James Packer, who was once married to Mariah Carey — in exchange for political favors.

Sara Netanyahu’s lawyers responded angrily to the new charges, which they derided as “false and delusional.” The attorneys, according to a report in the Israeli newspaper Haaretz, noted that she had passed a polygraph test about the alleged misconduct.

“Not only is the indictment based on false claims and distorted and mistaken data, it is based entirely on an illegitimate and illegal regulation imposed specifically for Prime Minister Netanyahu,” the attorneys said, according to Haaretz.

Netanyahu himself isn’t named in the new indictment, but close observers of the family say his shadow looms over the entire 19-page legal document. Anshel Pfeffer, the author of a new biography of Netanyahu, said on Twitter that it was “simply obscene in hanging all of this on Sara & not Bibi. She’s at fault, but he’s the [prime minister].”

9. But Sara is not an elected politician or civil servant. The blame is Netanyahu’s who as an elected leader fostered that sense of total entitlement around him. I have no doubt he deeply loves Sara but he is now throwing her to the wolves instead of taking responsibility. END

It’s not clear when Sara Netanyahu’s trial will start, how long it will take, or what sort of punishment she’ll face if convicted. Netanyahu doesn’t seem to have a direct connection to the specific crimes she’s accused of committing, but he could follow her into a courtroom because of the other corruption allegations swirling around him.

Mandelblit, the Israeli attorney general, has yet to decide whether to formally charge the prime minister with bribery, fraud, and abusing the powers of his office. He’s expected to make a decision within months, and possibly sooner.

For Israelis, it’s jarring enough to see the country’s first lady accused of a litany of crimes. It would be far more unnerving to see one of the longest-serving prime ministers in the country’s history — one whose polling numbers have been sharply rising in recent months — indicted for even more serious ones.