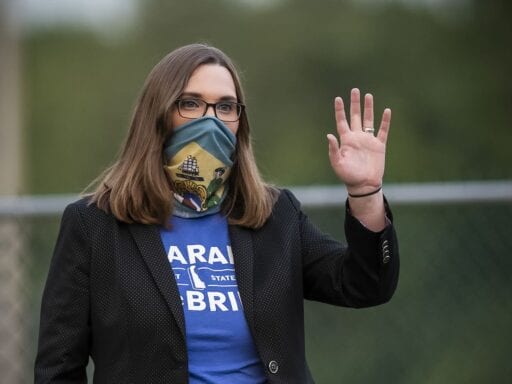 Delaware has just made history by electing Sarah McBride — now the highest-ranking openly transgender official in the country — to the state Senate.

McBride’s victory, which was reported by the New York Times, was expected. (The LGBTQ Victory Fund, an organization devoted to electing LGBTQ individuals, also called the race for McBride.) Her Republican opponent, Steve Washington, never gained traction in a district where then-presidential candidate Hillary Clinton won nearly 70 percent of the vote in 2016.

McBride, 30, has built on a career that’s been focused on securing LGBTQ equality, working in roles at the Human Rights Campaign and Equality Delaware, in addition to the campaigns of former Delaware Gov. Jack Markell and former Attorney General Beau Biden.

But while she has drawn on her work with the HRC and on nondiscrimination legislation, she told Vox that her campaign has been focused on health care affordability, universal paid family and medical leave, universal pre-K, and criminal justice reform.

McBride has been the target of transphobic harassment — as well as anti-trans Facebook posts made by her opponent — but she told Vox that the vast majority of voters never bring up her identity. “Voters in this district are fair-minded and they’re judging candidates based on their ideas and not their identities,” she said. “They’re looking for candidates with the imagination and the energy and the experience to meet this moment with meaningful results.”

McBride’s victory comes at a time when lawmakers in state legislatures across the country have been introducing laws targeting transgender and nonbinary people — from barring health care for trans youth to banning female trans athletes from competing in girls and women’s sports.

HRC spokesperson Lucas Acosta argues that legislation like this “is backlash from opponents of equality, not backlash from the American people. … It is so clear that the public is supportive of equality.” Acosta cited the 2017 victory of trans woman Danica Roem to the Virginia House of Delegates and the 2018 victory of Arizona Sen. Kyrsten Sinema, who is bisexual, as evidence that even Americans in less progressive parts of the country are voting for LGBTQ candidates despite pushback from state legislators.

McBride, for her part, is unsurprised at the juxtaposition between the attacks on LGBTQ communities and the commensurate rise in LGBTQ representation in government. “I think that it’s in those moments that change is forged,” she said.

“The story of every movement for justice, and frankly the story of our country, is the story of everyday people making seemingly impossible change through the most significant crises,” she added. “It’s always in our biggest crises that we take our largest steps forward.”