Sarah Sanders and the failure of “civility” 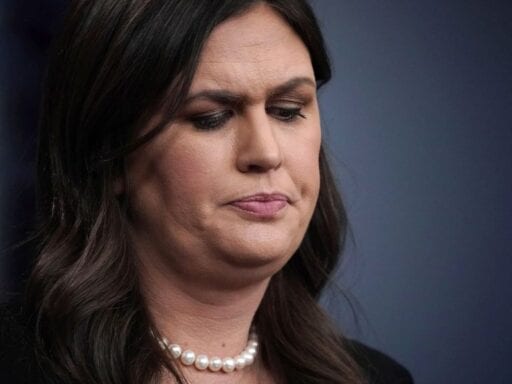 A little impoliteness could be what America really needs.

After White House press secretary Sarah Sanders announced that she had been denied service at a Virginia restaurant this past weekend, prominent figures from across the political spectrum expressed their indignation.

The Washington Post’s editorial board lamented the lack of basic civility in the era of President Donald Trump, seeing dark times ahead.

“Those who are insisting that we are in a special moment justifying incivility should think for a moment how many Americans might find their own special moment,” the Post’s editors wrote. “How hard is it to imagine, for example, people who strongly believe that abortion is murder deciding that judges or other officials who protect abortion rights should not be able to live peaceably with their families?”

The nightmare the Post is warning of — the uncivil politics of abortion — is already reality. Anti-abortion protesters regularly stand outside Planned Parenthood facilities around the country and harass women who are entering clinics. Some anti-abortion activists have even resorted to more dire means, with 12 documented cases of murder or attempted murder targeting abortion providers in North America since 1993.

But this isn’t simply a matter of a poorly chosen example. It points to the basic problem with the entire “civility” argument. American politics are uncivil — and have been long before Sanders sat down for dinner this weekend. And at the moment, this incivility is mainly coming from the White House. The Trump administration has flouted the norms of political discourse far more often than any of its opponents.

Sanders is uniquely complicit in this. Her job requires providing cover for the president’s most egregious lies, undermining a vital part of public discourse — the very idea of fair and open public discourse about the truth. If refusing service to Sanders puts the spotlight on this feature, it might not harm America’s political civility; in fact, it might even improve it.

What “civility” in politics actually means

Incivility in the Trump era isn’t about rude tweets. It’s about lies.

To understand what Sanders’s defenders are getting wrong about the dinner incident, let’s get straight on the difference between “incivility” in politics and simple rudeness. Our guide here will be John Rawls, by all accounts the greatest American political philosopher of the 20th century.

A major topic of Rawls’s work was the problem of political disagreement: How is it possible to have a democracy, a government allegedly for and by the people, when people disagree so much among themselves? Rawls attempted to answer this question in one of his major works, an extremely long tome titled Political Liberalism.

The core of his answer, to simplify it dramatically, is that democracy depends on a certain set of principles that almost everyone agrees with. These are principles that only “reasonable” people (not Nazis, for example) can accept — ideas like “all citizens deserve to be treated equally” and “it’s wrong to imprison people on the basis of faith.”

For this system to work, Rawls argued, public debate must be free and open for people to clearly explain how their policy convictions can be justified according to the shared beliefs at the heart of a democratic society. Rawls called the obligation to adhere to these rules of discourse “the duty of civility”: If citizens in general, and politicians especially, hide and obfuscate their arguments, then people’s ability to give their informed consent to the administration disappears.

Our foremost political philosopher, in short, didn’t see “civility” in politics as identical to politeness in everyday conversation. Rather, political civility is about treating members of the opposition like reasonable people. It seems more “civil,” in this view, to honestly state disagreements with individuals, even impolitely, than to try to trick them.

Rawls never really engaged with the possibility that a democratic government might make dishonesty one of its core political principles. But as my colleague Matt Yglesias has argued at length, that is what President Donald Trump has done — using a complete disregard for the truth as a tactic for advancing his agenda and keeping his base loyal.

The sheer breadth of this assault is jaw-dropping; according to the Toronto Star’s database of Trump lies, since becoming president Trump has made at least 1,726 verifiably false statements, a clip of more than three a day. The New York Times compared Trump’s record to Obama’s, and found a huge discrepancy: “In his first 10 months, Trump told nearly six times as many falsehoods as Obama did during his entire presidency.”

Because the president lies constantly, a major part of her job is defending those lies — either covering for them, deflecting them, or lying herself to cover for them. Merely doing her job makes Sanders (because of her boss’s uniquely hostile approach to the truth) uncivil according to Rawls’s terms.

The Trump administration is attacking the very heart of a democratic political system. And Sanders, by aggressively repeating and defending Trump’s lies, is a vital part of this machine.

Accountability is not uncivil

Voters have a responsibility to confront incivility that threatens democracy rather than to prioritize treating officials super politely.

Stephanie Wilkinson, the restaurant owner who kicked out Sanders, said this explicitly when Washington Post reporters asked her what she was thinking. “This feels like the moment in our democracy where people have to make uncomfortable actions and decisions to uphold their morals,” Wilkinson said.

Wilkinson also told the Post this crucial point — that she did what she did because Sanders was a public official and that she has regular customers who are politically conservative and has no problem serving them. Fantasies of separate restaurants for Democrats and Republicans are just that: fantasies.

Wilkinson acted to punish a political official for a specific set of severe wrongs, not to harm an average customer whose political views she happened to disagree with. A slippery slope to politically segregated dining, this is not.

Instead of the first shot in a cold civil war, Wilkinson’s actions are best seen as a form of holding political elites accountable, forcing them to answer for their actions — something citizens rarely have the opportunity to do. Given that the next elections are months away and the presidential contest isn’t until 2020, Wilkinson doesn’t have much of an opportunity to punish the White House for its egregious behavior occurring right now.

In his first 10 months, Trump told nearly six times as many falsehoods as Obama did during his entire presidency

Wilkinson’s actions aren’t those of a culture warrior looking to divide members of the US population against one another. In fact, there’s no evidence she wanted this incident to go public or inspire copycats; an employee of hers posted about it on Facebook, and it was Sanders who brought this matter wider attention by tweeting about it.

Absent those postings, no one would’ve known. It would have been a modest act by a private citizen to hold a public official accountable — a way of registering dissent with the way the government conducts itself, in keeping with the Rawlsian view of civility.

A small act of resistance can matter

Refusing service to Sanders is a political statement that could even be a way to bring about change. There’s evidence that inflicting personal punishments on political leaders does cause them to grapple with their actions and even change their behavior.

One study, for example, looked at a fine imposed on legislators in the French National Assembly when they skipped important committee meetings. The study looked at two things: the effect of the fine itself and the impact of it being widely publicized that a legislator skipped a meeting and thus was fined. The scholars found legislators “strongly increase their committee attendance both after the private experience of sanctions and after their public exposure.” So there’s reason to think that public officials do mind being sanctioned, both privately and in the public eye.

The United States is in the middle of a particular type of political emergency: the failure of American civil discourse as a democratic practice. A little impoliteness, of the right kind, might help to restore it.

How coronavirus could force the work-from-home movement
Vox Sentences: Brexit takes a U-turn
Trump advisers are scrambling to sell the idea that a recession isn’t going to happen
Former Times book critic Michiko Kakutani recommends books for the Trump era
11 films to watch if you loved — or hated — Hillbilly Elegy
Watch how the climate could change in these US cities by 2050