Sarah Sanders is upset because a restaurant wouldn’t serve her. She’s okay with it happening to gays. 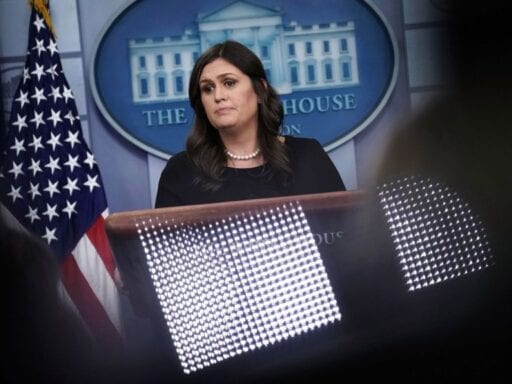 “Restaurant-gate” is really about the Trump administration’s commitment to courting divisiveness.

I feel for White House press secretary Sarah Sanders. I’d be miffed, too, if I sat down with a group of friends to a spread of cheeses at a charming farm-to-table restaurant only to be asked to leave by the owner. That was Sanders’s Friday night:

Last night I was told by the owner of Red Hen in Lexington, VA to leave because I work for @POTUS and I politely left. Her actions say far more about her than about me. I always do my best to treat people, including those I disagree with, respectfully and will continue to do so

I happen to believe that food establishments should offer their goods to anyone willing to pay for them. Sanders does not. She thinks it’s okay, for example, for a business to hang a sign in their window saying they won’t serve gay couples. This is why, on one level, her very public dig at the owner of the Red Hen, which set off a torrent of hate tweets and threats her way, is ridiculous. It’s hypocrisy.

On another level, “restaurant-gate” is an example of the Trump administration’s unique commitment to courting divisiveness. Donald Trump doesn’t even pretend to speak to or for all Americans. Rhetorically, there hasn’t been a more disrespectful administration in 150 years. But when Sanders wants dinner, the White House is all for mutual respect. Either way, the base laps it up.

This disregard for all kinds of people has had real consequences, including in the lives of gay people, transgender people, migrant children, victims of domestic violence or police brutality — and the list goes on. When Sanders, or any Trump official, tweets indignantly about a slight, it’s just added insult.

As Trump’s press secretary, Sanders defends his many lies, his attacks, and his policies. She does her job with a sheen of professionalism, but that’s not the same as respect.

The irony of restaurant-gate is that Sanders supports the owner of Masterpiece Cakeshop, Jack Phillips, who refused to bake a wedding cake for a same-sex couple in Colorado. The owner of the Red Hen, Stephanie Wilkinson, told the Washington Post one reason she asked Sanders to leave was because of Sanders’s stances on gay rights. The staff includes several gay workers. The staff was also deeply upset about Sanders’s defense of Trump’s family separation policy, she said.

“I would have done the same thing again,” Wilkinson told the Post. “We just felt there are moments in time when people need to live their convictions. This appeared to be one.”

Sanders understands the idea of convictions and business. The owner of the bakery in Colorado opposes same-sex marriage on the grounds of his Christian beliefs. And so, he argues, baking a wedding cake for two men would infringe on his First Amendment rights. Initially, the Colorado Civil Rights Commission sided with the couple, but earlier this month the Supreme Court ruled narrowly on the facts of the case, siding with Phillips 7-2.

When the high court heard oral arguments in December, Sanders went as far as to say it would be fine for a business to hang up a sign announcing it denies services to gay people. Here’s the full exchange at her regular briefing with the White House press, from the Advocate:

“The lawyer for the solicitor general’s office for the administration said today in the Supreme Court if it would be legal, possible for a baker to put a sign in his window saying we don’t bake cakes for gay weddings,” The New York Times’s Michael Shear asked. “Does the president agree that that would be OK?”

”The president certainly supports religious liberty and that’s something he talked about during the campaign and has upheld since taking office,” Sanders replied.

When pressed on whether that included support for signs that deny service to gay people, Sanders responded, “I believe that would include that.”

Sanders sees a constitutional right under the First Amendment to chose who to serve and not serve in a business. But on Friday, she made no mention of this context. She made no attempt to distinguish the two. Instead, she took an opportunity to fan divisions between the White House’s base and everyone else.

The Trump administration is rude

Trump courts division. That’s how he took the White House. It’s how runs the country. And it’s how he’s campaigning for the 2018 elections. His favorite tactic is to say — or tweet — outlandish, horrible things about individuals, groups, or whole countries: They’re idiots, rapists, or shit holes.

He tweeted the other day that the stories of children and parents at the border are “phony,” a pretty rude thing to say considering the medical implications for children who’ve been ripped from their parents and vice versa.

He also tweeted recently that Democrats “want illegal immigrants, no matter how bad they may be, to pour into and infest our Country.” A flood of responses followed from liberals and Washington elites about the dark implications of the word “infest,” a word used by some of the harshest strongmen in history, who used the claim to justify mass murder.

Trump, of course, has said all manner of heartless things. He made fun of a reporter with a physical limitation. He insulted Megyn Kelly with his “blood coming out of her wherever” remark. He talked endlessly about “Crooked Hillary.” He called women who accused him of sexual assault a bunch of liars.

It’s true that Trump has no shame. But it’s not just that he doesn’t care what anyone thinks — he cares a lot about what his base thinks. When he stokes divisions, his base is happy.

But when Trump is attacked, even by a B-list celebrity, it becomes an opportunity to claim he’s been wronged. How dare someone be mean to him.

As president of the United States, Trump took time out of his day to say Kathy Griffin ”should be ashamed of herself” for appearing in a video holding what looked like his severed head. Trump tweeted it was “Sick!” Another time, while he was supposed to be running the free world, he got into it with Snoop Dogg over a video in which Snoop appears to shoot Trump.

It’s hard not to question reality when all this plays out. But it’s what this administration does. It attacks, then plays the victim when “attacked.”

Sanders has backed Trump through all of this, defending his comments, his counterattacks, and his policies. Maybe she was disappointed about dinner on Friday. Maybe she really did feel wronged. But her decision to spark a divisive feud between Trump supporters and liberals on Twitter feels familiar. It’s almost like she wants to have her cake and eat it too.

5 great social issues documentaries that help explain America in 2018
Pompeo’s shifting reasons for killing Soleimani puts the strike on shaky legal ground
The Senate just failed to pass more stimulus amid a struggling economy. Here’s why.
Facebook allowed companies to post job ads only men could see. Now that’s changing.
The economic cost of major tech events canceled due to coronavirus has passed $1 billion
Trump is blaming Obama for leaving him with “broken tests” for a virus that didn’t exist. Yes, reall...