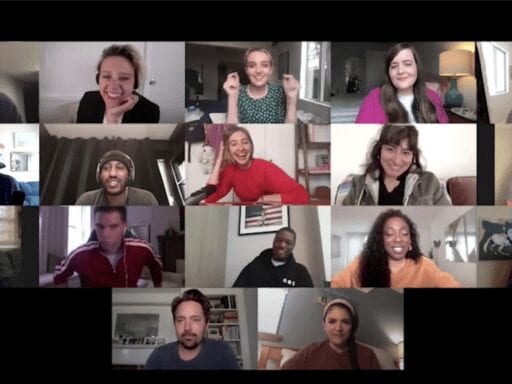 Social distancing has made late-night comedy — including the long-running sketch series — more experimental than ever.

The comedy institution has been met with these and similar complaints for years now, seemingly reiterated each season. Nostalgia-tinged dismissals and legitimate quality concerns are to be expected: SNL is now in its 45th season, a longer tenure than almost any show on TV.

But there is definitely some truth to the argument that the NBC staple doesn’t feel like it did back in its earlier (and sloppier) days of the ’70s and ’80s, when sketches were often the product of cocaine-fueled writing binges and the cast was more reliably chock full of future household names. SNL is a much more well-oiled machine now, without much room for unpredictability. Every episode begins with a cold open in which the cast showcases (frequently questionable) impressions of political figures as they rehash the week’s headlines before someone shouts “Live from New York!” A guest host delivers a monologue poking fun at their own career, and maybe sings a little song with some of the cast. Said host is shoehorned into sketches with new or recurring characters; sometimes there’s a pre-produced parody ad or “digital short”; a musician comes out and performs. Weekend Update riffs on news material that lends itself to rim shots and one-liners; the musician performs again. Maybe a particularly weird one-off sketch closes out the evening before everyone gathers on stage to issue thank yous and trade hugs. You can tune into the show any weekend and confidently expect this format.

All of this is to say that in 2020, SNL rarely feels very surprising. But the coronavirus pandemic has forced TV shows to make things work, to the extent they can, unconventionally and on the fly. Quarantine and social distancing measures have stopped all kinds of series from having actors perform together, on custom sets, in front of live studio audiences. Without any precedent for how to return to regularly scheduled programming during a global health crisis, production has either stopped altogether, or must happen under extreme limitations.

So far, late-night comedy and variety shows are the programs that have most excitingly proved their flexibility — despite being a genre that’s typically all about convention. Gone are the monologues to contrived laughter and a handful of celebrity guests and games. Nightly talk shows now film on iPhones from their hosts’ living rooms. Family members now serve as cast members. The Tonight Show with Jimmy Fallon has become At Home on Long Island with Jimmy Fallon: Every interview and musical performance takes place via the video conferencing app Zoom, which has become a newfound staple of socializing as the world stays home. Stephen Colbert is no longer kicking off The Late Show with a big-band intro while wearing a suit and tie. Jimmy Kimmel and Conan O’Brien are sitting at their kitchen islands, on their couches, on their bathroom floors, talking to an audience of whoever’s in the room with them at the time.

Meanwhile, Saturday Night Live has seen a previously scheduled hiatus extend indefinitely. Social distancing efforts began in New York in mid-March, while SNL was taking a few weeks off after its March 7 episode. Suddenly, the show’s return seemed unlikely, as its cast couldn’t physically come together. (The March 28 episode, set to feature John Krasinski as its host, was canceled.) But this past weekend, the show broke with tradition for the first time in its history, airing a unique edition called Saturday Night Live at Home.

Saturday Night Live at Home was an ambitious and welcome experiment

The episode served as a fascinating trial run for how an ensemble comedy can function with the ensemble in different places. Saturday Night Live at Home ran for the usual 90 minutes, and followed SNL’s established format as best it could, presenting topical sketches, a politically-based monologue, a mid-show Weekend Update segment, and even a brief musical performance (from Coldplay’s Chris Martin). But it didn’t air live — probably to prevent any major technological hitches from messing up the broadcast. Zoom and FaceTime made numerous appearances out of necessity, but the show smartly mined its reliance on video chat for comedy.

One early sketch satirized how the pandemic has made video chat our best means of communication while thrusting upon all kinds of people who have no idea how to make a video chat work.

Another introduced us to a bored-at-home bro who decided to use his extra time at home being productive: by becoming a very bad Twitch streamer.

Weekend Update aired as a split-screen segment; Colin Jost sat in his fancy, perfect living room and his co-anchor Michael Che stood up in a room littered with sports and Sesame Street memorabilia. Whether or not the rooms Che and Jost filmed in were staged or authentic, they added humanizing touches to what is otherwise the show’s most obligatory element these days.

It’s where Saturday Night Live at Home most obviously broke with form that it became more than a novelty. SNL is a celeb-hosted variety show at heart. Episodes often live or die on the strength of their host, with writers aiming to include the host in as many sketches as possible, with little regard for their actual comic ability or how well they jell with the rest of the cast.

On Saturday Night Live at Home, frequent SNL host Tom Hanks made a surprise appearance to deliver an opening monologue that referred to his personal experience with contracting the coronavirus and to the weirdness of SNL’s at-home live show situation. But Hanks wasn’t part of the rest of the evening’s sketches. The writers didn’t have to shoehorn him or anyone else into the show. Instead, Saturday Night Live at Home took on the role of a true comedy showcase.

Kate McKinnon played Supreme Court Justice Ruth Bader Ginsburg in front of homemade posters, playing off no one but herself:

Oft-underutilized player Heidi Gardner got her own sketch where she reviewed the movies she’s watched at home, which felt like a perfectly weird YouTube comedy video:

Larry David made a cameo that hopefully won’t mark his last appearance as Bernie Sanders, sending up the former presidential candidate’s concession speech in a video filmed from the comfort of his home:

There was even time for a surprisingly dark and moving animated short, which is a rare inclusion for the show of late:

As with any sketch comedy, not every swing yielded a home run. But the cast’s effort to come together and make the parameters of an unprecedented situation work for them was encouraging. It was endearing, even, which is rarely true of SNL these days. Rarely if ever has the show been challenged to this degree. And its cast seemed to be up to that challenge, working together to highlight their collective and individual strengths.

With a forced format change — one that removes the set, the costumes, the celebrities, the dress rehearsals, and more — comes a sense of unpredictability. Whether or not Saturday Night Live at Home remains a one-off or becomes a recurring event, it showed that even after four decades, SNL still has some originality left.

Why more young people are getting sick in the latest Covid-19 outbreaks
Impeach him, anyway
The new bill that would create a crime called “abortion murder,” explained
Shera Bechard just sued Trump donor Elliott Broidy over a scuttled hush money deal
State-level Republicans are making it easier to run over protesters
Coronavirus in Lagos: Africa’s biggest city has a Covid-19 case