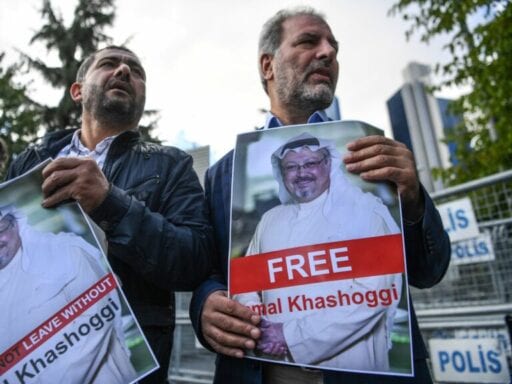 The incident could impact Saudi Arabia’s close relationship with the US.

Jamal Khashoggi, a well-known Saudi Arabian journalist and Washington Post columnist who has been critical of his country’s government, vanished last week.

His disappearance is straining Turkey-Saudi relations and could complicate Saudi Crown Prince Mohammed bin Salman’s recent attempts to recast his government as forward-thinking and reform-minded — as well as his country’s close relationship with the US.

The 59-year-old veteran journalist was last seen on Tuesday, October 2, walking into the Saudi Consulate in Istanbul. He was there to obtain a document verifying his divorce from a previous marriage so that he could marry a Turkish woman.

But what happened next is a mystery.

Turkish officials said over the weekend they have “concrete” evidence that the Saudi writer never left the building and was murdered there; some have even put forth gruesome theories of how his body may have been dismembered and smuggled out.

The Saudi government, however, says that they had nothing to do with his disappearance and maintains that he left through a back entrance.

A Saudi official told me in an email on Monday that “Jamal’s disappearance is a matter of grave concern to us, and we categorically reject any allegations of involvement in his disappearance.”

Amid an ongoing investigation, relations between Saudi Arabia and Turkey have quickly soured. The mystery is shaking Washington as well: Khashoggi had been living in self-imposed exile in the US for about a year — fearful, he said, that the Saudi government would target him for his dissident views.

If he was indeed murdered by his own government, it raises bigger questions about the safety of journalists, freedom of speech, and the future of Saudi relations with Turkey, the US, and others.

Sherif Mansour, the Middle East and North Africa program coordinator for the Committee to Protect Journalists, told me that he was very concerned about Khashoggi’s fate.

“We think the Saudi authorities need to provide a credible account with evidence and testimonies to explain what happened to him,” Mansour said on Monday. “It’s now six days later, and we have far more questions than answers.”

Here’s what you need to know to get caught up on the story.

Khashoggi used to enjoy close ties to the Saudi royal family. In the early 2000s, he served as an adviser to Saudi Prince Turki bin-Faisal, the former director of Saudi Arabia’s intelligence agency, while the prince was the ambassador to Washington. Khashoggi also worked as the editor of a Saudi newspaper, Al Watan. But in recent years, he had taken a more critical tack, criticizing the leadership of Crown Prince Mohammed bin Salman (also known as MBS).

The 33-year-old crown prince has tried to paint himself as a reformer by loosening restrictions on women driving and opening up cinemas in the Kingdom, but he’s also led a purge of opposition within his government under the guise of a crackdown on corruption and championed a bloody, brutal war with Yemen that’s left tens of thousands dead.

And despite his reforms, MBS hasn’t shown any willingness to tolerate political dissent or free speech. He’s even arrested some of the activists who championed the reforms he’s pushed through.

In June 2017, Khashoggi, fearing arrest, left the country. He resettled in the US, where he spent the past year living in self-imposed exile.

Khashoggi became a frequent contributor to publications like the Washington Post’s global opinions section and continued to criticize the Saudi government from afar. In a column published last September titled “Saudi Arabia wasn’t always this repressive. Now it’s unbearable,” he wrote of how his hope that the crown prince would be a reform-minded voice has now given way to fear of repression.

“I have left my home, my family and my job, and I am raising my voice,” he wrote. “To do otherwise would betray those who languish in prison. I can speak when so many cannot. I want you to know that Saudi Arabia has not always been as it is now. We Saudis deserve better.”

Khashoggi also expressed concern about being targeted by the Saudi government for his views, telling journalist Robin Wright in August that the country’s new leadership would like to “see me out of the picture.”

And just three days before he disappeared into the Saudi consulate in Turkey, he told BBC Newshour in an off-air interview that he doubted he’d ever be able to return to his home country. “I don’t think I’ll be able to go home,” he told the BBC, saying that in Saudi Arabia, “the people who are arrested are not even dissidents.”

Three days later, his worst fears may have been realized.

Khashoggi first went to the Saudi Consulate in Istanbul on September 28 to file paperwork needed for his upcoming wedding to a Turkish woman, Hatice Cengiz.

On Tuesday, October 2, he returned to the Saudi Consulate at around 1 pm, according to Cengiz. She told the Washington Post that she waited for him by the gate outside, but that several hours later, even after the consulate had closed, there was still no sign of him.

Cengiz said that she called the consulate and spoke to a guard, who told her there was no one inside. She then called the police, as well as an adviser to Turkish President Recep Tayyip Erdoğan, as Khashoggi had instructed her to do if anything should happen to him.

After several days of confusion and no sign of Khashoggi, Turkish officials said on Sunday that they believed the journalist had been murdered, according to the Washington Post.

Yasin Aktay, a friend of Khashoggi’s and adviser to the Turkish president, told Reuters that he believed Khashoggi had been killed inside the Saudi Consulate, and that Turkish authorities think that fifteen Saudi nationals were involved.

Turan Kışlakçı, the head of the Turkish-Arab Media Association and a friend of Khashoggi’s, told the Associated Press that Turkish officials he’d spoken with said Khashoggi had been murdered “in a barbaric way” and that they had evidence which they had not yet released. Other anonymous Turkish officials told news outlets that his murder had been “preplanned” and that his body had been moved from the consulate.

On Monday, Turkey requested an official search of the Saudi Consulate in Istanbul to find evidence of the apparent crime. Saudi officials said they would allow the consulate to be inspected.

Erdoğan has weighed in as well, saying that the disappearance was “very, very upsetting.” During a press conference on Monday, the Turkish president said the onus was on Saudi Arabia to prove that Khashoggi had indeed left the consulate. “The consulate officials cannot save themselves by simply saying ‘he has left,’” Erdogan said, according to Reuters.

In a letter to journalists on Tuesday, Saudi Ambassador to the US Prince Khalid bin Salman wrote that the Saudi government had sent a security team to work with Turkey to uncover what happened and were cooperating with Turkish authorities.

“Jamal has many friends in the Kingdom, including myself, and despite our differences, and his choice to go into his so called ‘self-exile,’ we still maintained regular contact when he was in Washington,” he wrote. “Jamal is a Saudi citizen whose safety and security is a top priority for the Kingdom, just as is the case with any other citizen.”

Turkey and Saudi Arabia already have a strained relationship, for a few reasons. The gulf monarchy is engaged in an ongoing blockade of Qatar, one of Turkey’s allies, and Riyadh doesn’t agree with Turkey’s embrace of political Islam or its close ties to the Muslim Brotherhood. Khashoggi’s disappearance could escalate matters, and cause either country to cut off diplomatic or economic ties.

But Saudi Arabia currently enjoys a strong relationship with the US. President Donald Trump visited the country on his first trip abroad as president in May 2017, and hosted MBS at the White House in March. The Pentagon has also continued to back the devastating Saudi-led war in Yemen by providing intelligence assistance, refueling planes, and engaging in gargantuan arms deals.

Khashoggi was a resident of Virginia, however, and if the Saudi government is indeed responsible for his disappearance, it could severely complicate the US’s friendly relationship with the country.

Already, several US officials have expressed concern about the matter. President Trump told reporters on Monday at the White House that he was concerned about the journalist’s disappearance. “Hopefully that will sort itself out. Right now nobody knows anything about it,” the president said.

Secretary of State Mike Pompeo said in a statement on Monday that the State Department had spoken with Saudi Arabia and expressed their concern. “We call on the government of Saudi Arabia to support a thorough investigation of Mr. Khashoggi’s disappearance and to be transparent about the results of that investigation,” he said.

Other officials have gone further. On October 6, Sen. Chris Murphy (D-CT) wrote on Twitter: “If this is true — that the Saudis lured a U.S. resident into their consulate and murdered him — it should represent a fundamental break in our relationship with Saudi Arabia.” Sen. Lindsey Graham (R-SC) tweeted on Monday that if there was any truth to the allegations, “it would be devastating to the US-Saudi relationship and there will be a heavy price to be paid — economically and otherwise.”

And on Tuesday, Sen. Rand Paul (R-KY) said that he would try to block any future weapon sales to the country, if evidence emerges that Riyadh was responsible for murdering Khashoggi.

Right now, however, it’s unclear what actually happened, and therefore whether or not the US-Saudi relationship will indeed be affected, or to what extent. But US journalists have spoken up in solidarity as well.

On October 4, the Washington Post ran a blank column under Khashoggi’s name with an editor’s note about his disappearance. Fred Hiatt, the paper’s editorial page editor, said in a statement that if allegations of Khashoggi’s murder are true, “it is a monstrous and unfathomable act.”

And Karen Attiah, the global opinions editor at the Washington Post, wrote last week about the journalist’s positive impact on free speech in the region.

“Jamal is one of the leading proponents of freedom and democratic change throughout the region, and he frequently denounces the harsh tactics deployed by the Saudi authorities against prominent clerics, business owners, female activists and social media figures,” she wrote. “For all the pieces that he has written to bring awareness to the plight of those who were improperly detained, today I am saddened to plead for his safe and swift return.”

The government is reopened (for now). But the recovery process may take awhile
Big Tech opponent Bernie Sanders raises more money from Big Tech employees than anyone else
Pope Francis just compared abortion to “hiring a hit man”
A family of 4 could get $18,000 this year under a cash bill by Senate Democrats
TikTok clone Instagram Reels is just one of the many times Facebook has copied its competitors
The legal questions surrounding Trump’s new executive orders, answered