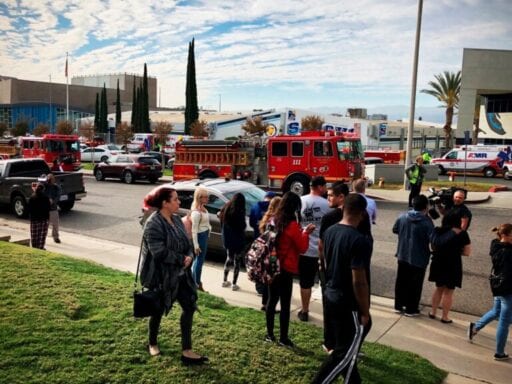 Share
Loading...
People wait for students and updates outside of Saugus High School after a shooting on November 14, 2019, in Santa Clarita, California. | Marcio Jose Sanchez/AP

At least one person was killed and five others were injured, according to local officials.

At least one person was killed and five others were injured during a shooting at Saugus High School in Santa Clarita, California, on Thursday, according to news outlets.

The suspect is an Asian, male student in dark clothing, Los Angeles County Sheriff Alex Villanueva said. The sheriff tweeted that the suspect is in custody, but conflicting reports suggest he’s dead.

This story is still developing. Here’s what we know, and don’t, so far.

Democrats need to learn to name villains rather than vaguely decrying “division”
Feds admit that Russia is the “likely” source of the massive government hack
Trump’s fear-stoking immigration policy, in two White House retweets
Texas just became the first state to shut the door on refugees
Help is not on the way
“Who did you vote for”: Trump’s welcome-home question for the US pastor released by Turkey