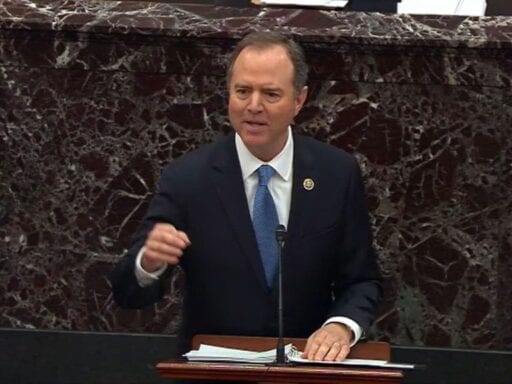 Democrats need to convince Republicans what Trump did was wrong, not that he did it.

Rep. Adam Schiff ended the second day of Democrats’ arguments in President Trump’s impeachment trial Thursday night with a plea to his fellow members of Congress: Don’t trade our most basic moral principles for politics.

“If the truth doesn’t matter, we’re lost. [The] framers couldn’t protect us from ourselves, if right and truth don’t matter,” Schiff said, speaking to Republican senators. “And you know that what he did was not right.”

Schiff came to his emotional conclusion by laying out the facts of the case against Trump — which are roughly the same from the start of the impeachment saga and aren’t in dispute.

The evidence shows that Trump used public money as leverage to try to strongarm a foreign government into doing him a personal political favor. The scheme was foiled when a government worker blew the whistle.

Given Trump’s unrepentant position and his history of putting himself before the country, there’s little reason to suspect he wouldn’t try and cheat once again — especially as he heads into a tough reelection campaign.

Schiff’s conclusion captures the state of impeachment in the Senate. The hurdle for Democrats isn’t to convince Republicans Trump did what he’s accused of doing. It’s to convince them that what Trump did was wrong — and that that is more important than partisanship.

The facts aren’t in dispute

On Thursday, Schiff laid the groundwork for the charge of abuse of power by going over a set of known facts: Trump subverted the authority of the American intelligence apparatus by enlisting his personal lawyer to work with a foreign government in an effort to dig up dirt on a domestic political foe.

The question is whether Republicans will concede the obvious conclusion, which is that Trump did all this not in the national interest, but in his personal interest.

So far there’s little reason to suspect they will. Trump’s interests have become increasingly synonymous with the interests of the Republican Party.

Giuliani himself went on Fox News Friday morning and pushed a conspiracy theory as a defense.

Schiff pointed to the testimony of Lt. Col. Alexander Vindman — who fled Ukraine with his family when he was three, rose to become the top Ukraine expert on the National Security Council, and came forward to talk about what he knew about Trump’s abuses of power — as an example of someone who puts country before his personal interest.

Schiff closed by emphasizing the theme:

But here, right is supposed to matter. It’s what’s made us the greatest nation on earth. No constitution can protect us if right doesn’t matter anymore. And you know you can’t trust this president to do what’s right for this country. You can trust he will do what’s right for Donald Trump. He’ll do it now. He’s done it before. He’ll do it for the next several months. He’ll do it in the election if he’s allowed to. This is why if you find him guilty, you must find that he should be removed. Because right matters. Because right matters and the truth matters. Otherwise, we are lost.

Donald Trump must be convicted and removed from office.

If not, no Constitution can protect us.

If not, we are lost. pic.twitter.com/USfx6v9KsT

At the very least, Schiff’s remarks represented a notable moment in American history. But Fox News didn’t even broadcast them.

Instead, at the very moment one of the major figures in the Trump impeachment saga was imploring the Senate to rediscover its moral compass, viewers of Trump’s propaganda panel were watching Laura Ingraham and guests push the very conspiracy theories that motivated Trump’s corrupt Ukraine scheme and resulted in his impeachment.

This was what Fox News viewers were seeing at the very moment Schiff was wrapping up his emotional closing remarks last night: Laura Ingraham and guests pushing conspiracy theories about Hunter Biden, the DNC, and Ukraine pic.twitter.com/rsH4xYZ4XM

As poignant as Schiff’s remarks were, it’s unlikely they’ll have any impact on Senate Republicans, who have responded to the impeachment managers’ case with self-refuting talking points and smears against people like Vindman who came forward to testify about the president’s misconduct.

Adam Schiff is hailing Alexander Vindman as an American patriot.

How patriotic is it to badmouth and ridicule our great nation in front of Russia, America’s greatest enemy?

On Friday morning, Sen. John Barrasso (R-WY) went on CNN and basically said he was bored by Schiff’s presentation — nevermind that he and every other Republican senator voted repeatedly on Tuesday night to block Democrats from subpoenaing new documents and testimony.

“In some ways it’s like Groundhog Day — about every hour and a half they start over again,” he said.

How to make sure the census counts you
The coronavirus revealed what was already broken in America
The Senate Intelligence Committee’s new Russia report, explained
Netflix’s The Laundromat is certainly the most entertaining way to learn about the Panama Papers
Vox Sentences: One step closer to Trump’s financial records
Coronavirus stimulus checks are on the way — if you haven’t gotten one already