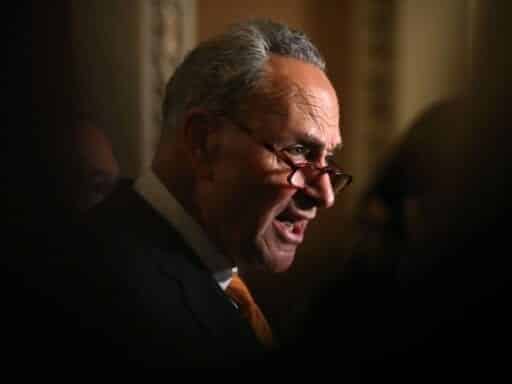 Here’s how the Senate minority leader is trying to fight back.

Senate Minority Leader Chuck Schumer has laid out a plan for Democrats to thwart President Donald Trump’s Supreme Court pick. They’re facing an uphill battle when it comes to wrangling votes, so the strategy boils down to winning the narrative.

As part of this approach, Schumer’s aiming to leverage flashpoint issues like abortion and health care to gin up public pressure on some of the lawmakers who sit a bit closer to the center, a tactic he outlined in a New York Times op-ed. “I’d like to see massive marches and rallies and protests,” he said during a recent town hall teleconference, per WNYC.

If Democrats can make enough noise to sway moderates like Sens. Susan Collins and Lisa Murkowski over to their side — much like they did in last year’s Obamacare repeal fight — it’s possible they could collectively stonewall a potential nominee. And at the very least, they could get people riled up for the next election.

“The Republican majority in the Senate is razor-thin. One or two votes in the Senate will make the difference between the confirmation and rejection of an ideological nominee,” Schumer wrote in his op-ed. “If the Senate rejects an extreme candidate, it would present President Trump the opportunity to instead select a moderate, consensus nominee.”

Given Sen. John McCain’s current absence, Republicans only have one seat that would give them an advantage in the case of a party-line Supreme Court vote. That puts the spotlight on Collins and Murkowski, two pro-abortion rights Republicans who are seen as possible swing votes, even though they ultimately voted in favor of confirming Republican Justice Neil Gorsuch in 2017. Red-state Senate Democrats Heidi Heitkamp, Joe Manchin, and Joe Donnelly are also potential party-line defectors who voted to confirm Gorsuch.

Schumer insists that things could shake out differently this time around: It’s clear that the fate of abortion’s legality in this country is now on the line, with Kennedy as the deciding vote in every key abortion case during his tenure. As such, Schumer wants to give this strategy his best shot, but ultimately getting Democratic voters to take the Supreme Court as seriously as Republican voters do in the future may be the party’s only hope.

And, if nothing else, there’s always trolling. An ABC News reporter said during a call with Trump on the topic, Schumer urged the president to choose Merrick Garland, Obama’s failed 2016 nominee for the Supreme Court as a way to “unify the country.”

Why Democrats are leaning into abortion and healthcare as flash points

The crux of Democrats’ approach to blocking a Supreme Court nominee centers on highlighting the threat that a more extreme candidate could pose to abortion rights and healthcare coverage for people with preexisting conditions.

Schumer leans into this in his op-ed, noting that the justices who have made President Donald Trump’s shortlist have garnered the backing of the Federalist Society and the Heritage Foundation, both entities that are interested in rolling back government health care programs and abortion protections.

There are a few reasons Democrats are trying to use these two issues as flash points, according to a source familiar with Democrats’ thinking. For one, abortion rights are an emotionally charged subject that has been known to galvanize the Democratic base. And right now, these rights are facing concrete attacks: There are a slew of pending state laws and cases that could quickly spur existential challenges to Roe v. Wade, once a new Justice ascends to the bench.

Roe v. Wade, specifically, has overwhelming voter support, which makes nominating a justice who is vocal about its rollback a riskier proposition. About two-thirds of Americans believe that Roe should not be overturned, according to a Kaiser Family Foundation poll that was released last week.

The preservation of the Affordable Care Act, meanwhile, may be a way to secure the backing of endangered Democrats like Heitkamp, Donnelly, and Manchin — who are all battling for their political lives in states that were swept by Trump — and have reliably stuck by the ACA this year. With a prominent lawsuit attacking protections against preexisting conditions that has the Trump administration’s support winding its way through the courts, the law’s preservation is not an academic question.

Perhaps most importantly, these two issues mark areas where Democrats and the more moderate Murkowski and Collins have common ground, serving as effective pressure points for securing their votes, the source said.

Collins has already said that she would not be supportive of any nominee who is hostile toward the 1973 landmark Roe v. Wade court decision, which guaranteed women’s constitutional right to an abortion. She also expressed skepticism, however, that Justices Neil Gorsuch or John Roberts would support an effort to overturn Roe, given what she described as their commitment to backing precedent. (Schumer took issue with this perception in his op-ed, noting that both justices had no issue pushing back against a 41-year-old precedent in their recent Janus decision.)

Murkowski is also known for her pro-abortion rights stance and both senators were pivotal votes against the Obamacare repeal that Republicans attempted to push through last year. In addition to Sen. John McCain, they were the sole Republicans who opted to join with the Democrats to ultimately prevent a repeal from coming to fruition. If they were to make this calculus again — and the entire Democratic caucus voted as a bloc — they could have the numbers to stop a nominee from moving forward.

Not everyone is thrilled by Schumer’s approach. Attendees on a recent town hall teleconference questioned whether Schumer’s strategy was tough enough to have a real impact, per the Washington Post. “We are in a gunfight, but we have a butter knife,” one of the attendees said.

While more “disruptive” ideas like quorum-breaking — which would require Democrats to withhold their attendance at Senate sessions, and thereby prevent lawmakers from reaching a “quorum” — have been floated as possible tactics, Schumer has indicated that he prefers to focus attention on the issue areas that have been raised. He asked constituents at the recent town hall to stop “prodding Democrats to use their limited procedural power to delay a Supreme Court confirmation,” according to ABC News.

“I think if we put all of our eggs in that basket, we’ll have less of a chance to focus on the substantive issues,” he said, per Politico.

There are also fears of an insurrection within the Democratic Party itself, in which there’s previously been a chasm between Senate red-state moderates and the rest of the caucus.

Schumer did not call red-state Democrats out specifically in his op-ed and as The Hill reports, he’s been more inclined to “let fellow Democratic senators make up their own minds on an important issue.”

At the town hall, many New Yorkers seemed to disagree with this hands-off strategy, calling for Schumer to get all members of the Democratic party in line. “Whip the vote! Whip the vote!” they chanted.

.@chuckschumer no shows to a town hall in Brooklyn and people are demanding he “WHIP THE VOTE” – @bkindivisible pic.twitter.com/bBZvdLejBz

Yes, we sometimes work against our short-term interests for long-term goals
Polls: Biden and Trump are nearly tied in North Carolina and Georgia
Biden wants a national face mask mandate. Can he do that?
Vox Sentences: We’re on a bullet train toward 3D-printed guns
Systemic racism, explained (to kids)
Most US clinical skin care is designed for white women. This CEO is making products for everyone.