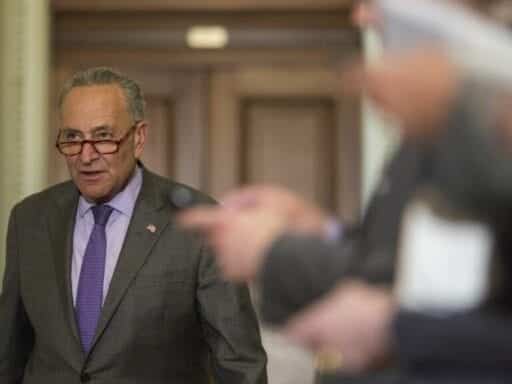 “It is hard to think of a more pathetic surrender heading into the Kavanaugh hearings.”

A sudden deal made by Senate Minority Leader Chuck Schumer on a set of judicial nominees has made Democratic activists livid.

With Brett Kavanaugh’s Supreme Court confirmation hearing looming next week, Schumer reached an agreement late Tuesday with Senate Majority Leader Mitch McConnell to fast-track the confirmations of 15 Trump-nominated judicial picks. Seven federal district court judges were confirmed that day, and eight were put on the docket for confirmation next week.

A Senate Democratic aide says that the majority of the nominees greenlit as part of this deal were uncontroversial anyway — and emphasizes that Schumer’s efforts enable Democrats to hit the campaign trail, giving red-state Democrats a few extra days in their home states before coming back for Sen. John McCain’s memorial services this week.

But Democratic activists aren’t buying it — and many were concerned that this move showed weakness, especially going into the high-stakes Kavanaugh hearing.

“Mitch McConnell is in the middle of stealing the federal courts for conservatives, and Democrats continue to bring a butter knife to a gunfight,” said Brian Fallon, the head of activist group Demand Justice, which is leading opposition efforts against Kavanaugh, in a statement. “Democrats should be resisting Trump’s judge picks at every turn, not agreeing to fast-track them, as happened this week. It is hard to think of a more pathetic surrender heading into the Kavanaugh hearings.”

As Vox’s Emily Stewart writes, a running tally by Bloomberg shows that McConnell has already confirmed 60 judges, including 33 district court judges, 26 appeals court judges, and Supreme Court Justice Neil Gorsuch. Earlier this year, the Trump administration was already far outpacing the number the Obama administration was able to confirm at the same point in his presidency.

And unlike the Supreme Court nomination — for which Democrats have very limited procedural levers to block Kavanaugh — there are options available for lawmakers to stymie some of the lower-court nominees, even if these tactics aren’t guaranteed to work.

Schumer’s willingness to give Republicans what some see as a free hall pass was downright confusing to many activists, especially given McConnell’s no-holds-barred approach to stalling Obama administration picks. Schumer seems to be thinking about protecting his red-state Democrat colleagues — but it’s a complete mismatch with the party’s base, which is frustrated over Republicans’ ability to remake the courts in recent years and wants Democrats to fight back.

“If Democrats fought at every step to play what few cards they have as a minority caucus, they could reduce the judges that get confirmed,” MoveOn Washington director Ben Wikler said. “McConnell is using every weapon in his disposal and Democrats aren’t fighting back equally.”

A Harry Reid staffer posited at least one alternative

Former Senate Majority Leader Harry Reid’s deputy chief of staff Adam Jentleson said on Twitter on Tuesday that there were other ways for Democrats to stand their ground — even if these judicial nominees could ultimately get through. Jentleson’s approach would have Democrats capitalize on procedural tactics to slow the confirmation of Trump nominees, at the very least.

Jentleson said that Democratic leaders could “take a stand” by putting one senator on the floor at all times to object to a nomination. That would force McConnell to run through the “cloture” process for each nominee, meaning he would need to get 51 votes to end debate and start a vote to approve the nominee. Therefore, two rounds of votes would be required, each requiring 51 senators to agree.

“Instead of giving their consent to instantaneously confirming all of these Trump judges … they’d be recording their opposition to these nominees and to the ability of a [president] implicated in federal crimes to make lifetime appointments,” Jentleson, who is now director of public affairs at the nonprofit group Democracy Forward, said.

Jentleson’s former boss was famously known for blowing up a rule that established a 60-vote threshold for confirming presidential cabinet members and judicial nominees while he was Senate majority leader, a move that was heralded at the time but has since been viewed as paving the way for the advancement of many Trump picks.

“If you can get senators behind you, you can wield a lot of power,” Jentleson wrote. “If you can’t, you’re … not a real leader.”

This blowback marks a test of Schumer’s leadership

As Nancy Pelosi wrestles with a growing number of House Democrats who say they wouldn’t back her for speaker, Schumer is facing one of the biggest tests of his role as minority leader, a position he was elected to in November 2016.

While no sitting senators have come out against his leadership (Arizona Democratic Senate candidate Kyrsten Sinema recently said she wouldn’t vote for him), this deal marks the latest maneuver that’s spurring murmurs about his efficacy in the role — concerns which have been bubbling up even among his constituents.

During a New York telephone town hall earlier this year, Schumer’s constituents questioned Democrats’ approach to the Supreme Court fight. They argued that Schumer lacked the teeth needed to truly take on the Republicans — especially Mitch McConnell, who was ruthless in his opposition to Obama, refusing to even bring Obama’s Supreme Court nominee Merrick Garland up for a vote. At the event, a number of attendees joined a chant calling on the leader to “Whip the Vote” and compel the Democratic Caucus to unite against Kavanaugh.

A slew of progressive groups including Indivisible, NARAL, and Color of Change have continued to beat the drum on this message, arguing that all Democrats should make very clear about where they stand on Kavanaugh.

In the past, Schumer has been known for giving Democratic senators some room to make up their minds, a strategy that not everyone in the party agrees with. Schumer, however, is seen as taking the pragmatic approach.

There’s very little Democrats can do to stop Kavanaugh’s confirmation and forcing endangered senators to take a tough vote could work against them in the midterm elections. The problem is, the party also needs to turn out voters who believe Democrats will stand up to Trump — and fast-tracking judges is not the message those voters want to hear.

“People don’t know what’s going to happen,” said Teresa Mayer, an activist with Indivisible BK, during Schumer’s town hall in June. “He’s supposed to be the leader of the party.”