Scientists feared unstoppable emissions from melting permafrost. They may have already started. 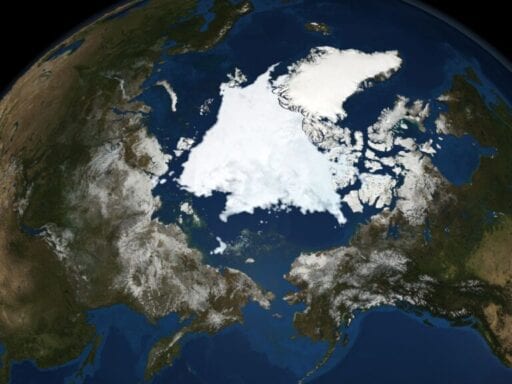 Share
Loading...
The Arctic is now emitting as much carbon as some countries. | Universal History Archive/Getty Images

The Arctic is a ticking time bomb that just got lit.

Every year, the National Oceanic and Atmospheric Administration releases an Arctic Report Card, detailing the state of the frozen world at the top of the globe.

And each year, its findings grow more dire. This year, the report revealed that the Arctic itself may now be contributing to climate change. That’s because Arctic soil contains a lot of carbon, which would stay there if it weren’t for the fact that the planet is warming. As the frozen ground across the Arctic starts to thaw, it releases that carbon, which turns into a greenhouse gas. Some of that carbon gets taken up by plants growing in the summertime, but more and more of it is now escaping into the atmosphere.

“Thawing permafrost throughout the Arctic could be releasing an estimated 300-600 million tons of net carbon per year to the atmosphere,” the NOAA writes in the report. That’s roughly the equivalent of Japan’s annual emissions.

And those emissions are going to increase. “We think that should be two to three times bigger by the end of the century based on the kind of forecasting we’ve done,” Ted Schuur, an ecologist and the author of the report’s section on permafrost, said.

Scientists have long feared this tipping point. The Arctic permafrost — permanently frozen soil — contains a huge amount of carbon, trapped in ice. As the permafrost warms, it starts to release that carbon. That fuels more warming, which melts more permafrost, and … you get it. The cycle continues.

Now those fears are beginning to come true: “The accelerating feedback from changing permafrost ecosystems to climate change may already be underway,” the report states, ominously.

But that’s not all that’s lurking in the permafrost.

Permafrost is a layer of frozen soil that covers 25 percent of the Northern Hemisphere. It acts like a giant freezer, keeping microbes, carbon, poisonous mercury, and soil locked in place.

You can think of the Arctic as the freezer in your kitchen, but for the planet.

When the freezer in your kitchen is working, the food in it stays very cold, preserved, and intact. But if the freezer compressor breaks, it will slowly heat up. As it heats up, bacteria begin to eat your food, making it go rotten. And as the bacteria do this, they produce carbon dioxide, methane, and other gases and chemicals that smell terrible.

And make no mistake: The Earth’s freezer is breaking.

For tens of thousands of years, permafrost has kept 1,460 to 1,600 gigatons (a gigaton is a billion metric tons) of organic matter trapped in the soil. That’s more than double the amount of carbon currently in the atmosphere. It’s been slowly building, as plants that manage to grow in the uppermost layers of Arctic soil during the summer are frozen hard and buried in the long, dark winter. Some of this carbon has been frozen for thousands of years.

Though the permafrost has been thawing in recent years, the carbon it releases is usually taken up by plant life growing in the summer, so the Arctic has not been a contributor to climate change — until now, that is.

The biggest threat of melting permafrost is carbon

The new Arctic Report Card draws its conclusions from the most comprehensive assessments of emissions ever done in the region. One NASA study had planes fly over the Arctic for three years, measuring greenhouse gases over many Arctic ecosystems. “That’s an unparalleled dataset on this question,” Schuur said. “This is a wake-up call.”

Other reports looking to the future of the permafrost point to similarly grim conclusions.

The UN’s Intergovernmental Panel on Climate Change (IPCC) recently released a report totaling 1,000-plus pages, which amassed all of the best evidence on how the icy regions of the world and the oceans are threatened by climate change.

That report paints a grim future for the permafrost. Even if the world manages to hit the IPCC target of limiting global warming to 2 degrees Celsius by 2100, the report found that around 25 percent of the permafrost near the surface could still be lost. Changes to the permafrost (among other changes in the ocean and cryosphere) “are expected to be irreversible,” the report states.

In a more severe scenario where the world continues to increase emissions and we hit 5 degrees of warming, around 69 percent could be lost. That would drastically change the landscape of the Arctic and potentially set off a further acceleration of global warming.

All that melted permafrost would release more and more carbon into the atmosphere.

A 2014 study in Environmental Research Letters estimated that thawing permafrost could release around 120 gigatons of carbon into the atmosphere by 2100, resulting in 0.29°C of additional warming (give or take 0.21°C). By 2300, another study in Nature Geoscience concluded, the melting permafrost and its resulting carbon feedback loops could contribute to 1.69°C of warming. (That’s on the high end. It could be as low as 0.13°C.)

The logic here is simple: The more warming, the greater the risk of kickstarting this feedback loop. A study published in Nature Climate Change in 2017 predicted that 1.5 million square miles of permafrost would disappear with every additional 1°C of warming.

But these are just estimates, and they come with a good deal of uncertainty. It all depends on how quickly the Arctic warms. Some of this freed carbon might be taken up by new plant growth, which will be able to grow at higher latitudes as the world warms, according to the IPCC report.

But even so, the UN report states, carbon released from permafrost will become a significant contributor to greenhouse gas emissions.

There are other nasty things trapped in the permafrost

When permafrost melts, the ground warps, folds, and caves. In the following video, we demonstrate how that works using a frozen block of wet sand.

Roadways built on top of permafrost have becoming wavy roller coasters through the tundra. Long-dormant microbes — some trapped in the ice for tens of thousands of years — are beginning to wake up, releasing equally ancient C02 and potentially infecting humans with deadly diseases. The retreating ice is also exposing frozen plants that haven’t seen the sun in 45,000 years, as radiocarbon-dating research suggests.

It’s also important to note that carbon isn’t the only pollutant trapped in the ice. A new study in Geophysical Research Letters found that the Arctic permafrost is the largest repository of mercury on Earth. Mercury is a potent neurotoxin. And scientists now think there is around 15 million gallons of mercury frozen in permafrost soils — nearly twice the amount of mercury found in all other soil, the ocean, and the atmosphere combined.

“The release of heavy metals, particularly mercury, and other legacy contaminants currently stored in glaciers and permafrost, is projected to reduce water quality for freshwater biota [i.e. life], household use and irrigation,” the IPCC states.

Scientists don’t know how much of this mercury could be released, or when. But they do know this: Continued melting makes it more likely that the mercury will be released, pollute the ocean, and accumulate in the food chain.

When we lose permafrost, we also lose natural history

There are dangers buried in the permafrost. But there are also natural treasures yet to be discovered. The ice preserves all, including ancient animal remains and human history in the region. Think of Ötzi, the remarkably preserved 5,000-year-old corpse found in the Alps. If he had thawed, what was left of his body would have decomposed, and a window into the world he lived in would have been lost forever.

There may be other Ötzis in the Arctic, or preserved bits of mammoth DNA yet to be discovered. The melting may make some of these treasures briefly accessible — freed from the ice — but also threatens to quickly destroy them. According to Scientific American, once a specimen is uncovered and thawed, researchers have a year at most to recover it before it completely breaks down.

Nowhere on Earth is changing as quickly as the Arctic. Every year, it becomes easier to see, and we’re just starting to learn the consequences.

It’s also never been more important to act quickly and make sure feedback loops don’t spiral out of control.

“If we set off these cascades, these potential accelerations, we may not be able to rein them back in,” Schuur sayid.