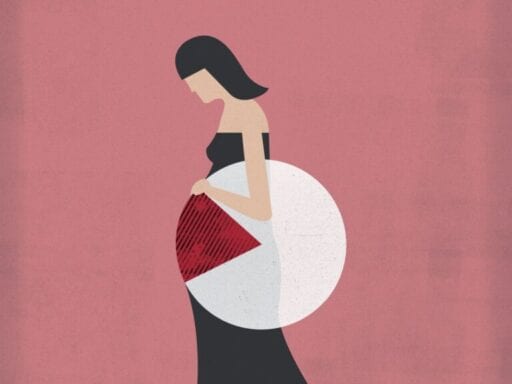 This is the first study to show just how close soot can get to the fetus.

You know it as soot. Scientists know it as black carbon. And pregnant women may begin to know it as an unwelcome stowaway in the womb.

A new study shows that when a pregnant woman breathes in black carbon, the pollutant can travel from her lungs to her placenta. Attached to the wall of the uterus, the placenta is what allows life-sustaining oxygen and nutrients to pass from the mother to the fetus. But apparently it can also harbor tiny particles of black carbon, which accumulate on the side of the placenta that faces the fetus.

Scientists analyzed 20 placentas of women in Belgium and found that each and every placenta had black carbon in it. Ten placentas came from women who live in areas with high levels of black carbon exposure. Ten came from women in low-level exposure areas. The more pollution the mothers inhaled, the more black carbon accumulated in their placentas, according to the study published last week in the journal Nature Communications.

The scientists also analyzed five placentas from miscarriages. They revealed that the particles were present even in fetuses as young as 12 weeks old, an extremely vulnerable developmental phase.

Black carbon comes from the combustion of fossil fuels or the burning of wood, so we can be exposed to it from cars or wood-burning stoves or even a forest fire. We already knew that it’s a climate pollutant, and that it can cause inflammation in humans, which can in turn lead to other health problems. But this is the first time scientists have directly proven that soot particles can reach the fetal side of the placenta.

It’s important to note that this study does not establish the health effects of soot in the placenta. The researchers will follow up with the women in the study to try to determine how the soot affects them and their babies over time.

Air pollution takes a huge toll not only on mothers or babies, but on everyone. It’s shortening our lives, in some countries shaving entire years off people’s time on Earth. And yet it’s a relatively neglected and poorly understood problem. This new study, despite its small sample size, should incentivize us to redouble efforts to study how air pollution harms people — not just in Belgium, but in different countries around the world, many of which are likely to be worse off.

“In Belgium, we have quite low concentrations in the air. And on top of that, we’re recruiting mothers in a neighborhood where there’s an especially low concentration,” said lead author Hannelore Bové of Hasselt University’s Centre for Environmental Sciences. “If we can find it at low levels, it should be even worse when you’re exposed at higher concentrations.”

How worried should we be about the effects of placental black carbon?

We already know from previous studies that air pollution is especially hard on babies.

Last year, a study of 1,293 Boston-area moms and their kids found that when fetuses were exposed in the third trimester to higher levels of particulate matter — the stuff that comes from cars and the burning of coal or oil — they were much more likely to have high blood pressure as children.

And as my colleague Kelsey Piper has reported, diesel cars that cheat on emissions standards have been linked to increases in the rate of premature births and low birth weights. Plus, bad air quality in areas affected by desert dust from the Sahara has been linked to a stunning 22 percent increase in infant mortality.

But scientists have long struggled to understand the exact mechanism by which air pollution affects the health of fetuses. They thought maybe fetuses went on to develop health problems because pollution provokes an inflammatory response in mothers. Until now, we didn’t know for sure that particles like black carbon could cross the placental barrier and build up on the fetal side.

The new study’s finding, the authors note, “represents a potential mechanism explaining the detrimental health effects of pollution from early life onwards.” It suggests the problem is not just inflammation in the mothers — the particles themselves may also be directly affecting the fetuses.

Although this study doesn’t demonstrate that placental black carbon causes problems like premature births and low birth weights, it is a plausible mechanism for explaining how such problems might arise, according to Yoel Sadovsky, the director of the Magee-Womens Research Institute in Pittsburgh. And he said the finding that black carbon is present in placenta is significant in itself.

But he cautioned that much more research is needed. “They haven’t shown that there’s an association between the presence of those black carbon particles in the placental tissue and an adverse pregnancy outcome,” Sadovsky said. “So I don’t think this study should take away sleep from pregnant mothers, even those who live in cities.”

In a country like Belgium, which has a relatively low level of air pollution, placental black carbon may not present a huge health risk. Scientists don’t yet know if there’s a specific threshold past which it becomes dangerous. But it may pose a significant public health problem in countries with higher levels of air pollution, such as Saudi Arabia, India, or China.

So, what should we do?

“It is really difficult to give people practical advice, because everyone has to breathe,” said Tim Nawrot, one of the co-authors. “But what people can do is avoid busy roads as much as possible. There can be very high levels next to busy roads, but just a few meters away can be lower.”

Changing our individual choices isn’t going to solve the whole problem, though. That requires governments to cut air pollution, Nawrot said, adding, “For the protection of future generations, we have to reduce exposure.”

According to the World Health Organization, one in every nine deaths per year is linked to inhaling harmful levels of particles such as black carbon. And almost 90 percent of air-pollution-related deaths happen in low- and middle-income countries. That makes air pollution an equality issue as well as a reproductive justice issue.

It’s something we should all be concerned about, not least because air pollution is shortening our global average life expectancy by 1.8 years per person. As WHO director Maria Neira put it, “It is a global public health emergency.” We’d do well to start treating it that way.

How much does sexism matter for female candidates?
Trump’s expert urged caution about a coronavirus treatment. Trump hyped it up anyway.
What is camp? The Met seeks to find out through fashion.
The Baby-Sitter’s Club is coming to Netflix
Julián Castro explains his vision for a “progressive” foreign policy as president
Eggnog, the holiday season’s most divisive drink, explained