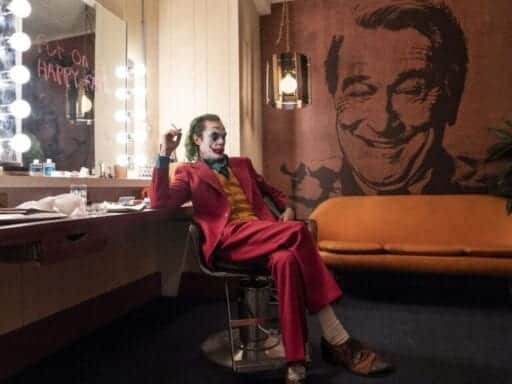 Share
Loading...
Arthur Fleck, dressed in character as the Joker (Joaquin Phoenix), sits in his dressing room as the face of Murray Franklin (Robert De Niro) looms in the background — which is a good encapsulation of Joker. | Warner Bros.

Todd Phillips’s movie pays homage to the unsettling classics, but misses their point.

Note: The following includes spoilers for the films Taxi Driver, The King of Comedy, and Joker.

About the only thing everyone agrees upon regarding Joker is that it’s kind of a remake of two Martin Scorsese movies: Taxi Driver (1976) and The King of Comedy (1982), both of which star Robert De Niro. In Taxi Driver, De Niro is delusional self-styled vigilante Travis Bickle, a Vietnam vet and violent misanthrope who becomes obsessed with first a campaign worker (Cybill Shepherd), then an underage prostitute (Jodie Foster), and then, ultimately, his own sordid heroic fantasies. In The King of Comedy, De Niro is Rupert Pupkin, a lousy but eternally optimistic stand-up comedian obsessed with late-night comedy host Jerry Langford (Jerry Lewis) and deluded about his chances of getting on Langford’s show. Pupkin and his equally obsessed friend Masha (Sandra Bernhard) concoct and then conduct a kidnapping to make their dreams come true.

In these two movies, De Niro is playing two sides of the same coin, men who lose touch with reality and blur their own paranoid fantasies with real life. What’s chilling about both is they initially present as engaged, courteous, even genial men, with a strongly developed moral sense and a genuine interest in others as humans. We’re tricked — like the women they both pursue — into thinking they are, at worst, ridiculous but harmless. It’s only when they’re rejected that their true colors start to emerge.

De Niro appears in Joker, too, though now as a secondary character. He’s in the Jerry Lewis role as Murray Franklin, a late-night host whom future Joker Arthur Fleck (Joaquin Phoenix) idolizes. Like Rupert Pupkin, Fleck spends hours in his home imagining being on Franklin’s show; when he finally gets his wish, he’s humiliated by Franklin, who shows video from Fleck’s disastrous stand-up routine on national TV. And like Travis Bickle, when pushed toward his edge, Fleck turns violent. (Pupkin is never violent — the gun he and Masha threaten Langford with isn’t real — but the potential for it hangs over all of his actions, especially as they grow increasingly unhinged, and that’s what gives them power.)

All three of these guys — Travis, Rupert, and Arthur — have plenty in common, and Joker knows it. All three of these movies coax us to watch a guy crack up, turn violent, and then become a folk hero. And all three think they’re existential heroes: Men who stand alone against the pressure of the world around them, choosing to forge their own paths.

Paul Schrader, who worked as a critic before he wrote the screenplay for Taxi Driver, told Film Comment in 1976 that he was trying to “take the European existential hero … and put him in an American context.” So he re-read Jean-Paul Sartre’s novel Nausea, one of those novels that features an existential hero at its center, and also thought of novels like Albert Camus’s The Stranger and Fyodor Dostoevsky’s Notes from the Underground, while creating the character of Travis Bickle.

“In so doing,” Schrader said, “you find that he becomes more ignorant, ignorant of the nature of his problem”:

Travis’s problem is the same as the existential hero’s, that is, should I exist? But Travis doesn’t understand that this is his problem, so he focuses it elsewhere: and I think that is a mark of the immaturity and the youngness of our country. We don’t properly understand the nature of the problem, so the self-destructive impulse, instead of being inner-directed, as it is in Japan, Europe, any of the older cultures, becomes outer-directed. The man who feels the time has come to die will go out and kill other people rather than kill himself.

Elsewhere, Schrader said that writing the screenplay was “self-therapy”: “I felt I had to write him so I wouldn’t become him,” he said, and you can feel that in the film, which Schrader told Film Comment felt like an amalgamation of himself, De Niro, and Scorsese all at once. All three men were in their early 30s, near Bickle’s age, early in their careers, and the pathology that simmers under Bickle’s surface seems borne of something uncomfortably familiar.

The King of Comedy sports the same feeling of uneasy lived-in knowingness, though it’s written by a different former film critic (Newsweek’s Paul D. Zimmerman), and Pupkin’s destructive impulse seems bent more on glory-seeking self-humiliation in the glaring TV limelight than actually hurting anyone. Familiar territory, again, for a director and actor who, six years after Taxi Driver, were bona fide stars. (The pair had made New York, New York and Raging Bull in the interim.) Pupkin’s line as he’s led away from Langford’s set in handcuffs — “Better to be king for a night than schmuck for a lifetime” — rings true, but in a way that’s only gotten more distressing in the years since.

With both films, critics worried how audiences would act out violently once they’d seen these characters transformed into folk heroes. That’s why Taxi Driver was received ambivalently even as it raked in awards, including the prestigious Palme d’Or at its Cannes debut, where boos met the announcement of its win. In 1982, John Hinckley Jr.’s lawyers claimed that Taxi Driver had partly inspired his assassination attempt on Ronald Reagan the year prior. In reviewing The King of Comedy shortly after that, some critics worried that it would inspire similar copycat crimes. (It didn’t.)

But the underlying worry was that audiences would not just feel sympathy for them, but also identify with Pupkin and Bickle. Pupkin hasn’t produced a rabid fan base, though his influence is clear in today’s comedy landscape. A loser who literally lives in his mom’s basement and fantasizes about meeting his favorite celebrities might be the prototype for “fan” in some people’s minds, but you wouldn’t want to put a poster of him on your wall.

Bickle, on the other hand, actually has a thriving fan base, presumably made up of the same guys who idolize Tyler Durden. On the internet, you can buy all kinds of fan art featuring Bickle, from handmade posters to wall tapestries. (By contrast, the only Pupkin product on Etsy seems to be this inside joke T-shirt.) And most people who went to college after 1976 remember some guy in their dorm who had a photo of the infamous mohawk prominently displayed on the wall.

The contrast is telling. Bickle comes across as cool; Pupkin is a schmuck. Both men are hailed as heroes of the people in the end, but only Bickle has really gotten away with murder.

And yet we can’t help but feel some kind of sympathy for, maybe even kinship with, both Bickle and Pupkin — lonely men whom the world does not wish to treat kindly. Both movies take their power from how they toy with us, never telegraphing to us whether or not we’re supposed to feel this, and then showing us by the end, definitively, that the people who elevate Travis Bickle or Rupert Pupkin to the status of hero are fools.

Which is to say, if we idolize them, we’re the fools.

Joker inspires a different audience reaction than its heroes

Which brings us back to Joker, the film explicitly inspired by them both. (Scorsese himself was reportedly attached to Joker as a producer, and even rumored to consider directing, until he ended his involvement in 2017; his longtime producing partner Emma Tillinger Koskoff remained on board.) How does Arthur Fleck measure up to Bickle or Pupkin?

It’s complicated. The King of Comedy is not a tale of one man’s humiliation, but a bigger story about the nihilistic dead ends of fans’ celebrity worship and the culture that cultivates it. Taxi Driver is not the story of a hero, but of a madman who fancies himself a hero. And both hang the people who idolize them out to dry.

But by mashing the two together in one tale — and removing most of their films’ humor and irony — we’re left with a movie that can’t quite get a handle on its protagonist the way Scorsese’s two films managed to do. That’s complicated by wrapping the Bickle/Pupkin avatar into the skin of the Joker, an icon of chaos who’s become a meme for the internet’s angry-man elements on the fringe and yielded a healthy dose of rancid anger. It’s hard to really do with Fleck what The King of Comedy did with Pupkin when the Joker’s biggest fans veer awfully close to a Pupkin type with Bickle-like aspirations.

Sadly for Fleck and his eventual Joker evolution, the resulting character is just a pathetic victim, and we know what we’re supposed to feel for him: pity. That’s signaled throughout the movie, loud and clear. He is beaten up, abandoned, mocked, and mistaken.

Unlike Bickle and Pupkin, when Fleck finally finds himself through violence, it reads unequivocally as a moment of self-actualization. He did it, guys. He finally overcame his oppressors and came into his own. Sure, you can condemn his actions. But then, aren’t you the bad guy?

Trump’s New Hampshire rally confirmed Democratic fears about impeachment acquittal
YouTube just made sweeping positive changes to its harassment policy. So why all the backlash?
Papa John’s founder said it was “a mistake” to resign after he used the n-word
Protesters hit the streets for a second night after officers aren’t charged with killing Breonna Tay...
Turkey’s invasion in Syria is creating even more refugees — just as the US shuts the door
10 facts about school reopenings in the Covid-19 pandemic