Scott Pruitt gave “super polluting” trucks a gift on his last day at the EPA. A court just put it on hold. 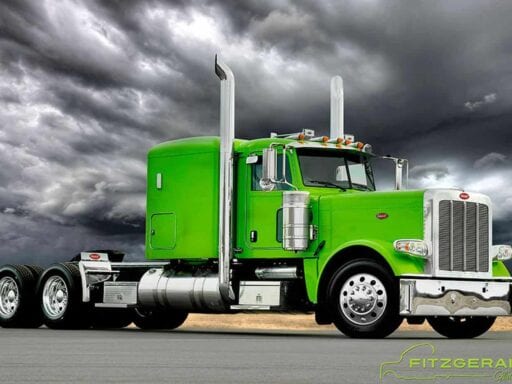 Pruitt secured a loophole for dirty glider trucks after he announced his resignation.

Update, July 18: The US Court of Appeals for the District of Columbia Circuit by a 2-1 decision issued an emergency stay on Wednesday in response to a lawsuit by the Environmental Defense Fund and other environmental groups. The order forces the Environmental Protection Agency to enforce stricter rules on “super polluting” glider trucks as the court considers permanently overriding Scott Pruitt’s final decision as the EPA’s leader.

Former Environmental Protection Agency Administrator Scott Pruitt managed to fire a Parthian shot on his final day in office when he cemented a massive loophole for some of the dirtiest, most polluting trucks on the road, allowing manufacturers to build even more of them.

It was Pruitt’s final knock to clean air after President Donald Trump asked him to resign Thursday as months of mounting scandals came to a head. “Pruitt didn’t want to leave his post and was described as being devastated that he had to resign,” according to Jennifer Dlouhy and Jennifer Jacobs at Bloomberg. Andrew Wheeler, a former lobbyist for industries including coal, will take over EPA as acting director on Monday.

Pruitt’s last policy decision benefits a small slice of truck manufacturers, including one that hosted a campaign event for Donald Trump.

The loophole, which the Obama administration took steps to close, involves glider kits. These are brand new trucks, but without an engine or transmission (hence why they “glide”). This category of truck was created so manufacturers could salvage parts from older trucks, or parts from those damaged in accidents.

However, older engines adhere to older pollution standards. They often don’t use technologies like selective catalytic reduction, a method to reduce nitrogen oxide emissions that cause smog and acid rain. These pollution control systems mandated on new trucks add cost, complexity, and can hamper fuel economy. So some truck buyers aren’t fans.

A cottage industry quickly sprang up to take advantage of this loophole and to pitch the virtues of gliders to buyers. “This process creates a reliable, more fuel efficient truck that requires less maintenance, yields less downtime and has the safety features and amenities owners have come to expect in trucks on the road today,” according to Fitzgerald Glider Kits, that largest glider truck manufacturer in the United States.

However, the EPA’s tests showed that even shiny new glider trucks can spew upward of 55 times the amount of pollution of modern trucks that use the current generation of pollution controls. Though they make up a tiny fraction of the overall trucking fleet, the EPA estimated that if current trends hold, gliders would account for half of all nitrogen oxide pollution from trucks by 2030. The American Lung Association described the trucks as “super polluting.”

So under Obama, the EPA moved to throttle the loophole and limit the number of glider trucks produced each year to 300. As Camille von Kaenel at E&E News observed:

The Obama EPA estimated that the rule’s requirement that gliders use modern engines in 2018 alone would have prevented between 350 and 1,600 premature deaths over the lifetime of the vehicles.

But left unchecked, refurbished trucks would emit more per year than all vehicles affected by the Volkswagen AG emissions-cheating scandal would have spewed by 2025, according to an analysis by the nonprofit Union of Concerned Scientists.

The cap was supposed to take effect this year.

To justify keeping the loophole open, the EPA cited a study by Tennessee Tech University funded by Fitzgerald. The study showed that the pollution from glider trucks is on par with that from completely new trucks.

The university has since disavowed the study, with the interim dean of Tennessee Tech’s engineering department Darrell Hoy calling the key finding a “farfetched, scientifically implausible claim.” He also noted in a memo that raising the alarm about the study could be “professional suicide” since Fitzgerald funds some facilities at the school. The university is also conducting an investigation.

Of course, shady science was not enough to stop Scott Pruitt. The EPA said earlier this month it would not enforce the 300-truck cap through the end of 2019. Per the New York Times’s Eric Lipton:

“The Agency is exercising its enforcement discretion in 2018 and 2019,” Molly Block, an agency spokeswoman, said in a statement late Friday, meaning that it is notifying glider manufacturers that even though the limit legally remains in place, the companies can effectively ignore it.

The agency, she said, is also considering formally delaying the 300-unit cap until December 2019 — by which point it hopes to have permanently repealed the cap.

That means the most-polluting trucks in America may see a resurgence and Pruitt’s toxic legacy will endure, at least for now.

Trump’s Fed pick, Stephen Moore, was held in contempt of court for failing to pay ex-wife more than ...
Trump is expected to nominate Amy Coney Barrett to the Supreme Court
Donald Trump is the president
UK Parliament has advanced the Brexit bill. Here’s what comes next.
Judge tells Trump to stop sending Central American asylum seekers back to Mexico
The stimulus’s $349 billion program to pay workers at struggling small businesses, explained