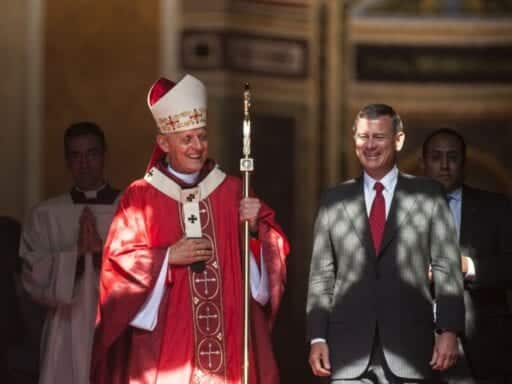 At stake: a society in which civil rights laws aren’t optional for religious employers.

Now, who exactly counts as a minister? A preacher counts, to be sure, but how about a teacher in a religious school? The Supreme Court has only ever decided one case involving this ministerial exemption, Hosanna-Tabor v. EEOC (2012), so it has provided very little guidance on just who qualifies as a minister. The two new cases, Our Lady of Guadalupe School v. Morrissey-Berru and St. James School v. Biel, concern whether school teachers with limited religious duties fall within the ministerial exemption — and thus are unprotected by anti-discrimination laws.

It may not seem like it at first blush, but the stakes in these cases are enormous. If the conservative Supreme Court defines the word “minister” broadly, that could potentially exempt many employees from the protection of civil rights laws, opening them up to discriminatory actions by the religious institutions they work for.

What is the ministerial exemption?

The ministerial exemption provides that religious organizations may choose which individuals embody their faith, and that the government may not interfere with this choice. As a practical matter, that means that laws prohibiting discrimination on the basis of race, gender, disability, or other such traits do not apply to “ministers.”

Few judges question that the Constitution gives religious institutions broad discretion to choose their own clergy. Hosanna-Tabor was a unanimous decision, and, as the Supreme Court explained in that case, the First Amendment’s provisions protecting the faithful and dividing church and state ensured that the government “would have no role in filling ecclesiastical offices.”

“The Establishment Clause prevents the Government from appointing ministers,” Chief Justice John Roberts explained for his Court, “and the Free Exercise Clause prevents it from interfering with the freedom of religious groups to select their own.” This is why, for example, a federal law barring gender discrimination in employment does not require the Catholic Church to ordain women.

But religious institutions employ many people who perform a combination of religious and secular duties — and many of these employees have only minimal religious responsibilities. According to the federal appeals court that heard the case, for example, Biel involves a Catholic schoolteacher who mostly provided secular instruction — but who also spent a couple hours every week teaching from a workbook on the Catholic faith. She claims that her teaching contract was not renewed because she has breast cancer, in violation of the Americans with Disabilities Act. (The school claims that this teacher lost her job because her classroom management was not strict enough.)

Based on these factors, Hosanna-Tabor was an easy case. The plaintiff in Hosanna-Tabor was a teacher in a Lutheran school that presented her as a minister and gave her the title “Minister of Religion, Commissioned.” She was required to “complete eight college-level courses in subjects including biblical interpretation, church doctrine, and the ministry of the Lutheran teacher,” and to pass an examination administered by Lutheran faculty. She’d also claimed a federal tax benefit for employees who earn their income “in the exercise of the ministry.”

And, on top of all of these factors, the plaintiff in Hosanna-Tabor taught both secular and religious subjects, she led her students in prayer, and she occasionally led chapel services.

As the appeals court decision explains, the plaintiff in Biel has a degree in liberal arts and a secular teaching credential. She’s taught in both religious and secular institutions, including “tutoring companies, multiple public schools, another Catholic school, and even a Lutheran school.” She has no formal religious training and has never held herself out as a minister. Her job title was “Grade 5 Teacher.”

She did have some religious duties, but these were only part of her responsibilities. She “taught lessons on the Catholic faith four days a week” and “incorporated religious themes and symbols into her overall classroom environment and curriculum.” She also had to make sure her students were quiet in their seats during a monthly mass.

According to the United States Court of Appeals for the Ninth Circuit, these limited religious duties were not enough to trigger the ministerial exemption. As Judge Michelle Friedland wrote, “the exception need not extend to every employee whose job has a religious component.”

The religious right has big plans for the ministerial exemption

Biel and Morrissey-Berru are hard cases. It’s not immediately clear just how much religious training and how many religious duties an employee must take on to be considered a “minister.” Yet, if the conservative Supreme Court includes too many people within the exemption, that could have devastating consequences for many workers doing almost entirely secular jobs.

Here’s a personal example: When I was 16 years old, I worked as a junior counselor at a Christian-identified summer camp. I spent the lion’s share of my time doing secular activities like playing capture the flag or teaching boating safety. But a couple evenings a week I would lead a 10-minute “devotion” for a small group of children, and then close that devotion with a prayer.

Was that enough to make me a minister, and therefore beyond the reach of civil rights laws? It seems doubtful that the Constitution framers imagined a teenager reading a Bible verse to children when they sought to keep the government from “filling ecclesiastical offices.” But if a schoolteacher who spends a couple hours every week teaching Catholic doctrine qualifies as a minister, then it’s hard to make a principled argument that a camp counselor leading religious-themed devotions doesn’t also qualify.

Here’s another example: Suppose that a publisher sells a mix of religious and secular books. A person works as a receptionist for this publisher, and their job duties require them to sometimes answer basic questions about the doctrines espoused by the religious books. Is the receptionist a minister?

It may seem obvious that the receptionist’s duties are pretty far afield from the work done by bona fide clergy. But, in 2015, the Southern Baptist Convention partnered with a leading Christian-right law firm to draft a manual advising religious employers to dole out religious duties to secular employees to immunize the employer from anti-discrimination law.

The manual, titled Protecting Your Ministry From Sexual Orientation Gender Identity Lawsuits, suggested that someone like the receptionist should qualify as a minister.

When feasible, a religious organization should assign its employees duties that involve ministerial teaching, or other spiritual qualifications — duties that directly further the religious mission. For example, if a church receptionist answers the phone, the job description might detail how the receptionist is required to answer basic questions about the church’s faith, provide religious resources, or pray with callers. Consider requiring all employees to participate in devotional or prayer time, or to even lead these on occasion.

Ultimately, it’s up to the Supreme Court — not the Southern Baptist Convention — to decide whether an employee who leads an occasional prayer session with their co-workers qualifies as a minister. But it’s clear from this manual that religious groups are already thinking big about what they can get away with if the ministerial exemption grows very large.

The result could be a society in which civil rights laws are optional for religious employers.