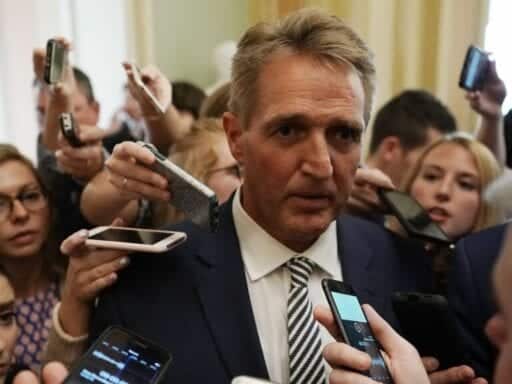 Flake said he would vote to confirm Kavanaugh this weekend unless “something big changes,” according to NBC News reporter Alex Moe.

He doesn’t anticipate anything like that: “I don’t see what would,” Flake said, adding he believes Kavanaugh will be confirmed.

Q: you think Kavanaugh gets confirmed tomorrow?
FLAKE: “I would think so.”

Flake’s decision to vote yes comes a week after the senator delayed the Senate confirmation vote on Kavanaugh to call for an FBI investigation into the sexual assault allegations Christine Blasey Ford brought against the nominee (which Kavanaugh continues to deny). He has been considered a pivotal swing vote that could make or break the nomination — along with Sens. Susan Collins (R-ME), Lisa Murkowski (R-AK), and Joe Manchin (D-WV).

Flake, Manchin, and Collins all voted to proceed to advance Kavanaugh’s nomination on Friday morning, while Murkowski voted no. This vote sets up the final confirmation vote on the Supreme Court nominee, which will likely take place Saturday.

Even though Flake had expressed concerns about Kavanaugh throughout the confirmation hearing, he had announced he would vote to confirm the judge to the Supreme Court last week, before surprising Republicans by calling for the FBI investigation at the last minute.

On Thursday, Flake implied that the limited FBI investigation had assuaged what concerns he had about Kavanaugh.

“I think Susan Collins was quoted saying it was very thorough but no new corroborative information came out of it. That’s accurate,” he told reporters at the Capitol on Thursday.

Flake did a rare thing in a Republican Senate that seems to be rushing full steam ahead to Kavanaugh’s confirmation vote — he asked to slow down to more fully examine Ford’s allegations that Kavanaugh had sexually assaulted her when the two were high school students.

He had also expressed some doubts about Kavanaugh’s attacks on Democrats during his testimony in front of the Senate Judiciary Committee last week, calling them “sharp and partisan.”

“We can’t have that on the Court,” he continued, according to the Atlantic’s Elaina Plott. (When Plott followed up with Flake shortly after the event Flake was speaking at, he attempted to reverse what he had said about Kavanaugh, adding, “I wasn’t referring to him.”)

But after reviewing the results of the FBI’s limited, four-day investigation on Thursday, Flake sounded satisfied with what the agency found.

“I wanted this pause; we’ve had this pause,” he told reporters. “We’ve had the professionals, the FBI, determine — given the scope that we gave them, current credible allegations — to go and do their review, which they’ve done.”

What we can learn from the “second wave” of coronavirus cases in Asia
Are we doomed? An investigation
China may double its nuclear arsenal in just 10 years. Don’t panic.
Vox Sentences: Election security — a laughing matter
Eric Garner died during a 2014 police encounter. An officer involved might lose his job.
Will the worst downturn since the Great Depression last as long?