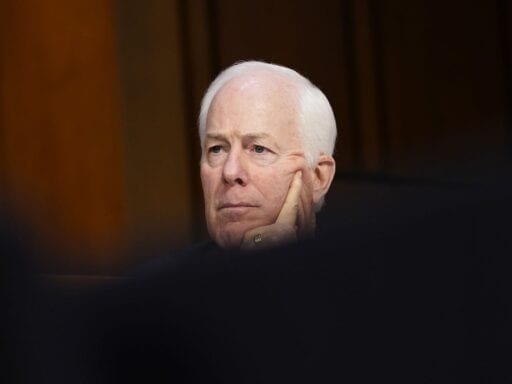 It was the first time the third-term senator had faced a real challenge.

Sen. John Cornyn, a three-term Republican, has fended off his first real challenge from newcomer MJ Hegar in Texas despite Democratic investment in turning the once reliably red state blue this election cycle.

It’s the second election year in a row in which a Democrat has come close to unseating a Republican senator in Texas, following former Congress member Beto O’Rourke’s near-miss against Sen. Ted Cruz in 2018.

Hegar, who ran for Congress in 2018 but has never held political office, had been trailing Cornyn in the polls by single digits; she appeared to be within firing distance of her opponent and had erased his cash-on-hand advantage. In the middle of a pandemic that made in-person canvassing impossible, however, the former Air Force helicopter pilot struggled to build name recognition across the state’s vast 254 counties.

Cornyn’s ability to compete with suburban and urban voters helped carry him to victory. Still, he isn’t emerging from the race unscathed. With Hegar biting at his heels, he was forced to shift to the center on certain issues, including his stance on offering permanent protections to immigrant DREAMers who arrived in the US as children.

Touting his record as a bipartisan dealmaker in the Senate, he sought to distance himself himself from President Trump, likening their relationship to a bad marriage (even though he has cast votes supporting the president’s agenda 95 percent of the time). Rather than staking his candidacy on the president’s record, Cornyn framed his reelection campaign as a fight to save Texas from coastal liberals.

“I think this election presents a clear choice between the people who recruited and supported MJ’s campaign, which want to make Texas more like California and New York,” he said during a televised debate last month. “I want to make the rest of the country more like Texas.”

Texas is at a political turning point, largely brought on by demographic change. The state last backed a Democrat for president in 1976, and Republicans have held state legislative chambers and the governorship since 2003. But the state is becoming increasingly urban, and Hispanics are on track to become its largest population group by mid-2021, two trends that generally favor Democrats.

That long-promised transformation has been slow to arrive, in part because state Republicans have sought to curb voter participation: Just this year, they have banned counties from sending mail-in ballots to all registered voters, limited the number of ballot drop-off locations to just one per county, and tried to stop drive-through voting. Nevertheless, Texas Republicans appeared to be in real strife this year up and down the ballot.

Cornyn, for his part, had been trying to portray himself as a moderate on certain issues as Hegar climbed in the polls. That was particularly clear in the way he spoke about his immigration policy.

Though the Republican Party has largely mirrored Trump’s restrictive immigration policies, Cornyn made a Spanish-language ad buy in September touting his support for the DREAM Act, which would offer a path to citizenship for 1.8 million unauthorized immigrants nationwide who came to the US as children. The bill, which is some two decades in the making, has been blocked repeatedly in Congress, sometimes with his support and sometimes without.

He voted against versions of the bill in 2006, 2007, 2010, 2013, and 2018, which immigrant advocates cite as evidence that he is no ally of DREAMers. If he really supported young unauthorized immigrants, he would have called for a vote on a standalone bill to legalize them that passed the House in 2019, Mario Carrillo, a Texas-based spokesperson for the immigrant advocacy group America’s Voice, said in a statement.

But Cornyn’s aides have touted his support for other versions of the bill, including a 2018 proposal that coupled permanent protections for DREAMers with $25 billion in funding for Trump’s border wall and other border security measures.

Cornyn’s decision to highlight that vote suggested that he was moving to the middle, Tory Gavito, a Democratic strategist and president of the donor network Way to Win, said.

“There is no doubt that the organizing that has gone into Texas has pulled him to the left,” she said.

As in other races nationwide, health care was a top issue

Both Cornyn and Hegar’s campaigns highlighted their competing visions of what the American health care system should look like, an issue that was top of mind in a state with one of the worst coronavirus outbreaks nationwide. Coronavirus hospitalizations peaked over the summer after Texas became one of the first states to reopen its economy, and there have been concerning signs that Texas is due for another surge as cases have recently spiked in El Paso and North Texas.

Pandemic or not, access to health care is an issue that looms large in Texas, which has the highest uninsured rate nationwide and is one of 12 states that have yet to expand Medicaid under the Affordable Care Act’s joint state-federal program; it has offered health care coverage to individuals with incomes below 138 percent of the poverty line (about $17,600 for a single adult) since 2016.

Hegar, who worked for a Texas hospital system for five years, has embraced a “Medicare-for-all-who-want-it” system modeled after the health care system in the military. She sought to draw attention to Cornyn’s history as a leading proponent of repealing and replacing the ACA in the Senate, and of receiving campaign contributions from pharmaceutical executives.

Cornyn claimed that, even if the ACA were repealed, he would still preserve the law’s protections for Americans with preexisting conditions, which most Americans support, and allow people under the age of 26 to stay on their parents’ health insurance plans.

“You know, preexisting conditions is something we all agree should be covered,” he said in a campaign ad that aired in October, echoing other Republican senators in close races.

Still, he supported the Republican-led Better Care Reconciliation Act in 2017, which would have allowed insurers selling plans on the individual market to deny coverage or increase costs for people with preexisting conditions. He also supported the Protect Act in 2019, which, despite Senate Republicans’ efforts to bill it otherwise, would allow insurers to offer “thin coverage aimed at healthy customers, and considerably more expensive policies with comprehensive coverage for people who might actually need costly care,” according to the LA Times.

“It blows my mind that John Cornyn can sleep at night after trying to rip away care from millions of Texans,” Hegar told Vox during an interview in October.

Geothermal energy is poised for a big breakout
A Novocaine shortage in the UK is affecting an unexpected group: farm animals
The Congressional Black Caucus has been an important Pelosi ally. But they’re getting impatient.
A Google walkout organizer just quit, saying she was branded with a “scarlet letter”
Thousands of Trump supporters stormed the US Capitol
Here’s who might replace Haley as UN ambassador