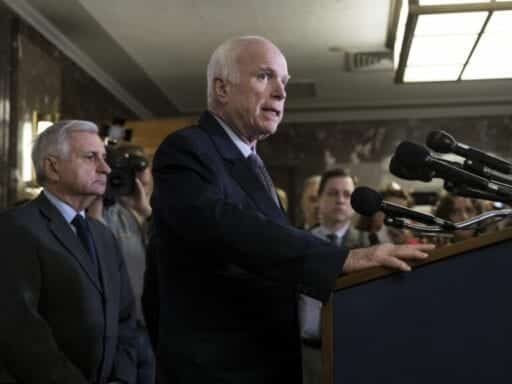 He leaves behind a complicated, momentous legacy.

Sen. John McCain has died at 81 after a year-long battle with brain cancer. McCain was diagnosed with glioblastoma in July 2017 and received aggressive treatment in his home state of Arizona.

McCain was a rare Washington figure who was liked and respected for who he was, even by his adversaries. But the former Navy pilot, Vietnam prisoner of war, Republican presidential nominee, and 30-year US senator leaves behind a complicated legacy. He served his country with distinction and at times proved willing to defy partisanship in service of his own principles. Other times, he fell short of his own ideals and the “maverick” reputation bestowed on him in the popular imagination.

McCain’s death will have dramatic implications for his beloved Senate: Arizona Gov. Doug Ducey will appoint a replacement to McCain’s Senate seat, one who will likely toe the Republican party line more reliably than McCain did. That could make it easier to wrangle together the 51 Republican senators needed for tough votes.