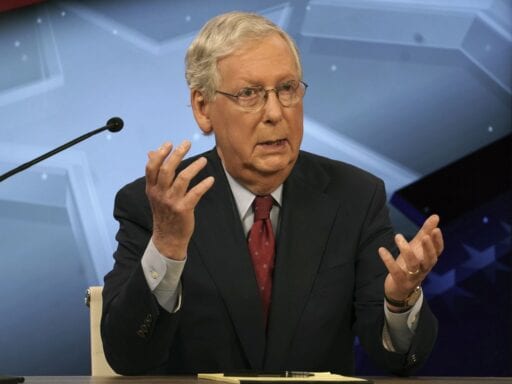 If Nancy Pelosi and Steven Mnuchin reach a stimulus agreement, it’s unclear whether Republicans would support it.

Senate Republicans don’t seem eager to approve a stimulus deal, even if House Speaker Nancy Pelosi and the White House reach an agreement.

This past weekend, Senate Majority Leader Mitch McConnell said the upper chamber would “consider” any compromise made between Pelosi and Treasury Secretary Steven Mnuchin, though it’s unclear if that means he would schedule a vote on it. (White House Chief of Staff Mark Meadows has said that the Senate would vote on any deal that’s reached, but McConnell has not explicitly confirmed this himself.)

In the past, the majority leader has been averse to voting on a more expansive package, in part due to fracturing within the Republican conference. Repeatedly, Republican senators like Ted Cruz (TX) and Ben Sasse (NE) have said publicly they want a small stimulus that limits new debt. So when the White House offered the latest $1.8 trillion deal, for example, McConnell made clear he wouldn’t be putting it on the floor.

The president is “talking about a much larger amount than I can sell to my members,” he said during a press appearance last week in response to questions about a stimulus bill that would be in that range.

Pelosi and Mnuchin, meanwhile, are still in talks about a more expansive package, an agreement that a growing number of House Democrats would like to see reached in the near term.

“I would like to see a deal now,” Rep. Tom Malinowski, a Democratic lawmaker from a swing district in New Jersey, told the Washington Post last week. “And what’s important to me is not the dollar amount but knowing that the central features like state and local government relief are funded for at least several months, because the need is immediate and great.”

Pelosi had previously turned down the White House’s $1.8 trillion proposal, arguing that the language it includes for coronavirus testing is inadequate and that the support it contains for child tax credits is insufficient. She has been working to reach a deal with the Trump administration for months, and stressed on Sunday that it would have to be struck by Tuesday in order for something to advance ahead of Election Day.

But Republican opposition could mean this compromise ends up stuck in the Senate. Even if Pelosi and Mnuchin get to a stimulus agreement, there’s a lot of uncertainty over whether Senate Republicans would be on board. If Democrats in the upper chamber back the compromise, they’d still need 13 votes from Republicans to ultimately pass it, which isn’t guaranteed.

Currently, lawmakers are going down two different paths on stimulus: Democrats have previously proposed moving forward with an updated version of the HEROES Act, which called for $2.2 trillion in stimulus spending, and are in talks with the White House on a compromise bill. Meanwhile, Republicans have their own, much narrower stimulus bill they plan to vote on this week.

Thus far, McConnell has not been as active a participant in negotiations as Pelosi and Mnuchin have been, a posture he’s taken during other stalemates like the government shutdown. As Sen. John Cornyn (R-TX) previously told Politico, McConnell sees this agreement as one that needs to be worked out between Democrats and the White House.

This time, however, Republican outcry over the size of a stimulus agreement and its additions to the national debt suggests that they’re the ones who could ultimately hold up a bill if Democrats and the administration work out their differences.

“I can tell you this, that there are some in the Senate who would support it. Whether there’s enough votes to get to the 60 vote threshold, that’s up to Leader McConnell,” Meadows said Monday, according to NBC News.

Many Senate Republicans have for months opposed a larger stimulus bill

Senate Republicans have been split on stimulus for months, and some members have been quite vocal in their opposition to a larger bill. Earlier this summer, GOP legislation that included roughly $1 trillion in stimulus spending garnered massive blowback from segments of the conference.

Since then, there have been repeated Republican pushes for a narrower bill, including a $500 billion option that’s getting a vote this week. Areas where Republicans have differed significantly with Democrats include the scope of state and local funding, as well as the allocations for expanded unemployment. And even as Trump has seemingly been willing to “go big,” McConnell has said that Republicans are largely interested in something that’s less expansive.

“My members think what we laid out — a half a trillion dollars, highly targeted — is the best way to go. So that’s what I’m going to put on the floor,” McConnell said during his press appearance.

There’s no deal yet

As Senate Republicans gear up for a pair of stimulus votes this week — one on the Paycheck Protection Program to help small businesses and one on their broader $500 billion bill — Pelosi and Mnuchin are working through differences between House Democrats and the White House.

There are still a number of sticking points, which Pelosi noted in a “Dear Colleague” letter she sent to the Democratic caucus on Sunday. Among them: The administration changed the language in her party’s proposal around funding for coronavirus testing, giving Trump more leeway in how stimulus spending would be used.

“The White House has removed 55 percent of the Heroes Act’s language for testing, tracing, and treatment,” Pelosi wrote. “Especially disappointing was the elimination of measures to address the virus’s disproportionate and deadly impact on communities of color.”

Additionally, there are remaining disagreements over how much funding would be allocated to child tax credits, which Pelosi has made a key priority.

There is pressure from within the Democratic caucus to reach a deal soon, rather than waiting until after the election. The issue is particularly pressing given the millions of people grappling with unemployment, evictions, and business closures as the economic fallout from the pandemic continues. And recent studies, like one from JPMorgan and the University of Chicago, have found that money families were able to save thanks to this spring’s stimulus packages is increasingly being exhausted.

“The idea that you’d walk away until February … is frankly unconscionable,” Rep. Josh Gottheimer (D-NJ), the head of the House Problem Solver’s Caucus, recently said in a CNBC interview.

Political experts have told Vox that Republicans may bear more of the political backlash for the hold-up in stimulus because they are currently the party in power in the White House. “Voters are likelier to hold the incumbent presidential party more responsible for the state of the economy, and the country as a whole,” Kyle Kondik, the managing editor of Sabato’s Crystal Ball at the University of Virginia, previously told Vox. “From a purely political perspective, Republicans should have more incentive to stimulate the economy than the Democrats.”

Right now, the deal between Democrats and the White House and the support it could get from Senate Republicans are up in the air. Whether the president can ultimately get his own party on board will be a key factor in advancing any potential compromise.

Inside the secretive Silicon Valley group that has funneled over $20 million to Democrats
How “kombucha girl” revolutionized internet fame
Saturday Night Live has elected its new Joe Biden
Obama’s HBCU commencement speech doubles as an indictment of the Trump era
The best $219 I ever spent: A HEPA filter for my parents
The success of Medicaid expansion, explained in 5 charts