Senate Republicans have already made up their minds on impeachment 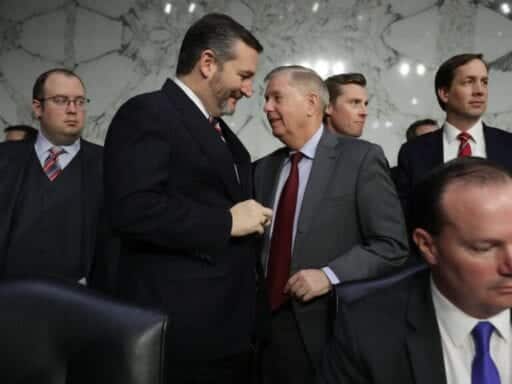 With the the impeachment process concluding in the House, Senate Republicans have made it clear Trump will not be removed from office during a Senate trial.

Members of the full US House of Representatives are likely to approve articles of impeachment against President Donald Trump this week, moving the impeachment process forward to the Republican-controlled Senate for a trial.

Sunday, Republicans and Democrats made their disagreement on what impeachment means clear, as lawmakers in both parties agreed that the president is unlikely to be removed by the Senate, while each group lamented how partisan politics have shaped impeachment proceedings thus far.

As attention moves to the Senate trial ahead of the historic House vote, Democrats have been quick to argue Republicans in the upper chamber aren’t taking their duty as jurors who are to render judgment on President Donald Trump seriously.

House Judiciary Committee chairman Rep. Jerry Nadler, who oversaw the final phase of the impeachment process in the House, told ABC’s This Week that Republican senators who have said they are coordinating the trial process — which has yet to be rigorously defined — with the White House are “in violation of the oath that they’re about to take, and it’s a complete subversion of the constitutional scheme.”

Senators must take an oath that they plan to do “impartial justice” when taking up an impeachment trial. But Republicans have made it clear that their interpretation of what that oath means differs from Nadler’s.

Senate Majority Leader Mitch McConnell said the Senate will hold a trial following the House vote, but it may be bare bones: A short hearing with no witness testimony, leading quickly to acquittal. He’s also said he’s working in “total coordination” with the Trump administration.

Sen. Lindsey Graham told CBS’ Face the Nation: “I’ve clearly made up my mind, I’m not trying to hide the fact that I have disdain for the accusations and the process.”

On ABC’s This Week, Sen. Ted Cruz defended coming to a conclusion on a verdict ahead of the trial, arguing that there are fundamental differences between jurors in a criminal trial and those in an impeachment proceeding, which is an “inherently political exercise.”

“But the oath of a Senate juror—it has some similarities to a criminal trial, but it has some differences as well.” https://t.co/CjcArIm1dE pic.twitter.com/E4SnpfuKqI

House Democrats, on the other hand, urged Republicans to be open to the facts that are to be presented during the trial — namely, the evidence Democrats gathered during House testimony on Trump’s attempts to get the Ukrainian government to investigate a political opponent, former Vice President Joe Biden.

But Democrats appear to have no illusions that the Senate trial might swing their way; last week, McConnell told Fox News, “There is no chance the president is going to be removed from office,” and both Nadler and House Intelligence Committee Chairman Rep. Adam Schiff seemed to accept this. They both argued, however, that even if Trump is not removed by the Senate, they’ll have done their jobs well.

“We cannot take the risk that the next election will be corrupted through foreign interference solicited by the president, which he’s clearly trying to do,” Nadler said on ABC’s This Week. “It is a total threat and we must meet that threat.”

Beyond concerns about future election interference, Schiff told This Week a lack of a removal “isn’t a failure. At least it’s not a failure in the sense of our constitutional duty in the House.”

He added, “This president believes that he is above the law and accountable to no one. … This road was necessary.”

.@gstephanopoulos: “If President Trump is overwhelmingly acquitted in the Senate, is that a failure?”

House Intel Chair Adam Schiff: “No, it isn’t a failure. At least it’s not a failure in the sense of our constitutional duty in the House.” https://t.co/P6iz1j1VA4 pic.twitter.com/G1oCNC46xu

At the heart of this debate is a question over what impeachment is — and to what degree the process was designed to be political.

Legal experts — including those who testified before Congress recently — have made it clear the country’s founders saw impeachment as being inherently political. For instance, Peter Margulies, a law professor at Roger Williams University School of Law, told Vox’s Sean Illing:

In Federalist No. 66, Alexander Hamilton envisioned impeachment as a political process run by Congress. That means Congress can impeach a president even if the executive actions at issue are not literally crimes but are abuses of power, as in the presidential phone call that triggered the Ukraine impeachment inquiry.

But Hamilton and the rest of the framers knew that politics is sometimes unfair; with the rise of political parties early in the Republic, all of the major players during the founding era were subject to scurrilous charges on a daily basis. For example, supporters of Jefferson attacked President Washington as a supposed lackey of Hamilton and Hamilton as an agent of Great Britain.

Jefferson’s supporters, of course did not vote to impeach Washington, and that is a large part of Senate Republicans’ argument: that, despite what Schiff has said, the impeachment process has been a failure from the start in that Democrats have reduced the threshold for exercising a serious constitutional power — in the words of Cruz, using impeachment to trigger a “partisan show trial.” That, Republicans say, is why removal doesn’t deserve proper consideration in their chamber.

Democrats, as they made clear in their articles of impeachment, believe Trump has committed the offenses the founders outlined in the Constitution, making the political process not only valid, but as Schiff has said, “necessary.”

The Senate trial is still to be defined; whether witnesses will be called, and how long it will run remains to be seen. It is to begin in January, however, and Trump is expected to be cleared on party lines. Republicans hold 53 seats in the chamber, and it would take 67 members to remove him.

Clint Eastwood’s new movie Richard Jewell thwarts its truth-telling by smearing its female journalis...
How the CIA’s fake vaccine program in Pakistan helped fuel the anti-vax movement
Sorry, but Democrats need to talk about Hunter Biden
“Probably the worst briefing I’ve seen”: Inside the disastrous congressional Iran meeting
With “Kill This Love,” K-pop queens Blackpink have made YouTube and iTunes history
Is it time to rethink the value of college?