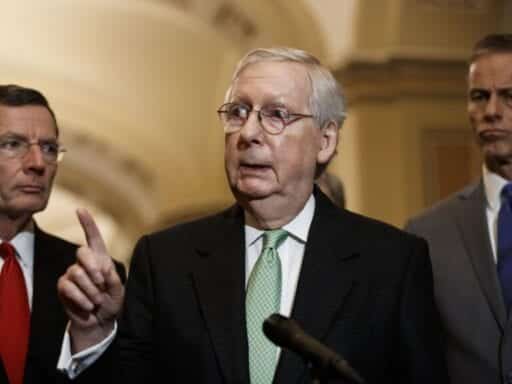 Even as lawmakers blocked hundreds of bills, they confirmed more than 100 judges.

Even as it stymied hundreds of bills this year, the Republican-dominated Senate was laser-focused, yet again, on confirming a huge number of judges at a rapid pace.

That included three who were deemed “not qualified” for the job, by the American Bar Association (ABA), the independent professional organization which has offered presidents guidance on judicial picks for decades.

Those were far from the only federal judges the Senate approved; in 2019, lawmakers confirmed a total of 102, including 20 circuit court judges. This number builds on the 66 judges the Senate advanced last year as President Donald Trump and Majority Leader Mitch McConnell seek to push the federal judiciary further to the right.

The ABA ratings have long been part of the vetting process that each judicial nominee goes through, though presidents have opted to treat them differently. Former President Barack Obama, for example, waited to receive the ratings before making his nominations official, while Trump has declined to do so.

For every person that is nominated for a judgeship, a panel from the ABA — made up of 15 law experts known as the Committee on the Federal Judiciary — ranks their qualifications based on interviews with colleagues, a review of their past writings, a personal interview and an examination of their broader body of work. The group has three ratings it grants nominees: well qualified, qualified, and not qualified, all of which are intended to capture a person’s “integrity, professional competence and judicial temperament.”

Since 1989, the group has rated just 21 announced nominees as “not qualified,” a rare classification that suggests an individual lacks the necessary professional expertise or judgment to serve on the federal bench.

As Vox’s Ian Millhiser has written, many of Trump’s appellate nominees have strong credentials for the judgeships they’re now in, including clerkships at the Supreme Court, and they’re likely to affect policy for decades:

There’s no completely objective way to measure legal ability, but a common metric used by legal employers to identify the most gifted lawyers is whether those lawyers secured a federal clerkship, including the most prestigious clerkships at the Supreme Court. Approximately 40 percent of Trump’s appellate nominees clerked for a Supreme Court justice, and about 80 percent clerked on a federal court of appeals. That compares to less than a quarter of Obama’s nominees who clerked on the Supreme Court, and less than half with a federal appellate clerkship.

That said, the president has also nominated far more individuals who’ve been dubbed unqualified, compared to President Barack Obama — who did not appoint a single nominee who received this rating. They too, will have a major impact, and their confirmations are indicative of how devoted Republicans are to advancing their goals of remaking the federal judiciary — no matter the fallout.

All three of the “not qualified” judges this year earned their marks for different reasons: VanDyke’s review, which followed interviews with 60 of his colleagues and former coworkers, was scathing. It noted that others saw him as “arrogant, lazy, an ideologue,” and emphasized that he would not affirm his stance on treating LGBTQ individuals fairly, something he later pushed back on at his confirmation hearing. Walker’s and Pitlyk’s, meanwhile, centered on their lack of legal experience.

In all three cases, Senate Republicans moved forward with the nominations — as they did with a slate of three “not qualified” picks last year as well. In total, the Senate has confirmed seven Trump-appointed judges who’ve been categorized as unqualified.

The advancement of these judges serves to send a message beyond their individual confirmations: It underscores the determination with which Trump and Senate Republicans have focused on transforming the courts, filling them with nominees who are younger, white, and predominantly male.

Republicans are so dedicated to these aims, it seems, that they’ll keep on backing Trump’s nominees — even if they aren’t seen as qualified for the task.

The White House signals a pause on coronavirus aid, even as the economic situation becomes more urge...
How “abolish ICE” helped bring abolitionist ideas into the mainstream
Why Pete Buttigieg is suddenly surging in the polls
Trump’s Covid-19 diagnosis may have come earlier than we thought
What would Keynes do?
Amazon suspends police access to its facial recognition technology. But only for one year.