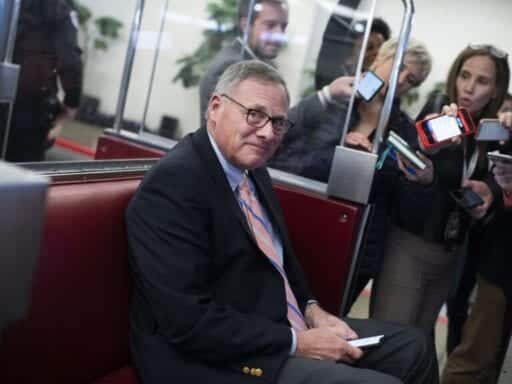 Sen. Richard Burr (R-NC) talks with reporters in the Capitol after the impeachment trial of President Donald Trump adjourned for the day on Monday, February 3, 2020. | Tom Williams/CQ-Roll Call, Inc via Getty Images

As the economy slides toward a recession, some senators have already sold their stocks.

Multiple US senators are coming under fire for selling off their personal stocks before the coronavirus outbreak cratered the stock market, prompting questions about what they knew — and when.

Sen. Richard Burr (R-NC) is under particular scrutiny, after the Center for Responsive Politics and ProPublica reported he sold between $628,000 and $1.7 million of his holdings in mid-February. That’s spurred questions about whether Burr, as the chair of the Senate Intelligence Committee, was acting on classified information about the coming coronavirus threat (something he vehemently denies).

But Burr isn’t the only one feeling the heat. Per her financial disclosures, Sen. Kelly Loeffler (R-GA) reported selling millions in stock she jointly owned with her husband (who is the president of the New York Stock Exchange) in January. And one new acquisition in Loeffler’s portfolio raised eyebrows: stock in a teleworking company called Citrix, according to the Daily Beast, which broke that story.

Both Burr and Loeffler are adamant they did not engage in insider trading, the buying or selling of stocks based on private or classified inside information. And two other senators — Dianne Feinstein (D-CA) and Jim Inhofe (R-OK) — who reported large trades around the same time also say the sales were unrelated to coronavirus.

There’s a long history of lawmakers profiting off stock trades, possibly from information they gleaned from their roles in Congress. So much so that Congress passed the Stock Act in 2012, which spelled out that lawmakers were expressly prohibited from insider trading and gave the House and Senate ethics committees the ability to implement new ethics rules. At least one lawmaker has received jail time in recent years over insider trading charges.

The reason these disclosures are getting so much attention now is that it’s happening at a particularly tense time: The stock market is in free fall, the economy appears headed for a steep recession, and thousands of Americans are getting laid off.

Even if senators are not technically engaged in illegal activity, selling off hundreds of thousands or millions of personal stock right before the stock market craters is not a good look as many Americans scramble to figure out how they will pay for rent or groceries.

What we know about the reported trades

Reports about Burr and Loeffler stock sell-offs landed one after the other Thursday night.

For Burr, the sudden sell-off of his personal stocks came on February 13 — when he dumped holdings worth between $628,000 and $1.7 million in 33 separate transactions, per recent financial disclosures with the Senate. Burr’s personal financial activity came days after he publicly projected confidence about the US response to the coronavirus, and around the same time as his committee was receiving daily briefings about the worldwide spread of the virus, according to a Reuters report.

For Loeffler, the sell-off of between $1.3 million and $3.1 million worth of stock she owned with her husband came starting on January 24, the same day the Senate Health Committee hosted an all-members briefing on the coronavirus (Loeffler sits on the committee). Loeffler’s husband, Jeffrey Sprecher, is the chair of the New York Stock Exchange.

Burr’s spokesperson told ProPublica that he “has been deeply concerned by the steep and sudden toll this pandemic is taking on our economy” while defending the transactions:

“Senator Burr filed a financial disclosure form for personal transactions made several weeks before the U.S. and financial markets showed signs of volatility due to the growing coronavirus outbreak,” his spokesperson said.

Burr tweeted that he “relied solely on public news reports to guide my decision” to sell his stocks.

My statement in response to reports about recent financial disclosures: pic.twitter.com/J4kye5a4ok

Loeffler also pushed back in a statement on Twitter, saying she doesn’t have a hand in investment decisions for her portfolio and was informed of the stock sale two weeks after it happened.

Financial disclosures show other senators and their families sold stock around the same time. Inhofe, who chairs the Senate Armed Services Committee, sold up to $750,000 worth of stock, saying it was related to a “continuing divestiture plan.” And Feinstein, the ranking member on the Senate Judiciary Committee, reported a stock sell-off in the millions, which she said was made by her husband.

“Under Senate rules I report my husband’s financial transactions,” Feinstein said in a statement. “I have no input into his decisions. My husband in January and February sold shares of a cancer therapy company. This company is unrelated to any work on the coronavirus and the sale was unrelated to the situation.”

Members of Congress are privy to information the rest of us are typically not. They are expressly not supposed to use that information for personal gain. But insider trading allegations can be extremely complicated and cases difficult to prosecute, one expert told Vox.

“The line between illegal trading and innocuous trading is not bright — it’s often a murky line,” said Robert Long, a former senior attorney at the US Securities and Exchange Commission. “Subtle facts and legal issues can make the difference between having an insider trading investigation closed and being prosecuted and going to jail.”

At Burr’s request, his case will be looked into by the Senate Ethics Committee. It’s unclear whether it will get any more increased scrutiny, or a criminal investigation.

The bipartisan act was signed into law by President Barack Obama in 2012, after it became clear some members of Congress were using the classified information they were getting in briefings to get personally wealthy. Burr was one of just three senators at the time to vote against it.

“Any insider trading investigation involving the Stock Act will likely focus on did the member of Congress obtain ‘material’ ‘non-public’ information during the course of his or her official duties, did the member place the trades or cause the trades to be placed, or, alternatively, were the trades done through a blind trust with zero involvement by the member,” Long told Vox.

As the Atlantic’s Annie Lowrey wrote recently, there was plenty of evidence that members of Congress were profiting on stock trades in the early 2000s, before the bill was passed:

One analysis of 61,998 stock trades made between 2004 and 2010, for instance, showed that politicians outperformed the market by 20 percent, with the portfolios of high-ranking Republicans beating the market by a whopping 35 percent.

But just as the Stock Act was signed into law with lots of pomp and circumstance in April 2012, it was quietly defanged — with the searchable financial disclosures stripped out — about a year later. Members of Congress quietly passed that bill by unanimous consent, and Obama signed it into law.

Former Rep. Chris Collins (R-NY) pleaded guilty to insider trading last year and was sentenced to 26 months in prison. Collins actively encouraged family members and friends to buy stock in an Australian drug company after receiving inside information on it. And other former members of Congress, including former Georgia Congress member and Health and Human Services Secretary Tom Price, have been accused of it. But as Long noted, prosecuting lawmakers is often difficult.

Now some Democratic lawmakers want to go a step further and ban lawmakers from owning individual stocks altogether. That’s what Sen. Elizabeth Warren (D-MA) proposed when she introduced a wide-ranging anti-corruption bill back in 2018.

“Enough of the spectacle of HHS secretaries and herds of congressmen caught up in insider trading schemes,” Warren said at a National Press Club speech in 2018 unveiling her legislation. “They can put their savings in conflict-free investments like mutual funds, or they can pick a different line of work.”

While House Democrats’ massive anti-corruption bill HR 1 also has some provisions tightening conflict of interest rules, it doesn’t go quite as far as Warren’s bill does. While HR 1 says no member should use their official position to introduce or pass legislation to further their own monetary interests, it doesn’t explicitly mention insider trading:

Warren wants to ban it outright — and after the fresh outrage surrounding Burr and other senators selling off stocks as millions of Americans prepare for the effects of a financial crisis, her bill could get a new look.