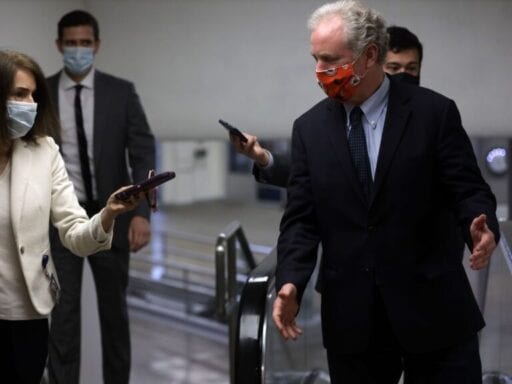 Share
Loading...
Sen. Chris Van Hollen (D-MD) wears a mask as he rides an escalator at the US Capitol on May 4, 2020 in Washington, DC. | Alex Wong/Getty Images

“We should be putting the pedal to the metal here,” Sen. Chris Van Hollen, the letter’s organizer, told Vox.

Nine prominent senators — all in the Democratic caucus — have penned a letter to President Donald Trump urging him to use wartime authorities to increase the amount of protective personal equipment (PPE) and testing supplies needed to confront the coronavirus.

Medical professionals lack the masks, gowns, and other items necessary to stay safe as they treat patients. And labs don’t have the requisite materials like swabs or complete kits to test people for the virus.

The lawmakers’ solution? Have Trump invoke Title III of the Defense Production Act (DPA), a Korean War-era law that gives the president greater powers over industry, to have the federal government provide loans and other financial incentives to firms so they can make what’s needed.

“It is clear that these widespread shortages will not be fully resolved until the nation’s production capacity can be dramatically scaled up, and despite unprecedented global demand, private sector companies have been reticent to expand production capacity without support and direction from the federal government,” a letter draft obtained by Vox reads.

Trump has used parts of the DPA before, most famously to boost the production of ventilators for hospitals. But, as the letter highlights, Trump has only used Title III twice: First on April 11 to increase the number of N95 masks, and then on April 29 to make more testing swabs.

In an interview after obtaining the letter, Van Hollen told me the focus on Title III as opposed to other parts of the DPA is because it “has been totally underutilized, and it can be a very effective tool.” That means millions of dollars in federal funding remain untapped to help businesses make products frontline medical workers and everyday citizens desperately need.

It’s no surprise, then, that Trump’s opponents in Congress have noticed the lethargy with which the Trump administration has addressed the shortfall. “This crisis requires faster, more coordinated action to limit loss of life in the near term and over the next year,” the senators wrote.

Warner, one of the letter’s signatories, is perplexed by the inaction. “I just cannot understand why the president hasn’t invoked the DPA to scale up testing and manufacturing of PPE,” he told me. “Considering how much this president likes centralized power, it’s a total head-scratcher.”

It’s unclear — and rather unlikely — that this letter will spur Trump to act. What is clear, though, is that he and his administration still have a lot of work to do to help the country defeat the disease.

“We should be putting the pedal to the metal here,” Van Hollen told me. “We really want to push this, because it’s a good fit for increasing supplies.”

As Vox’s German Lopez noted last week, the US is woefully beneath the testing levels required to understand who has the coronavirus — and the main reason is the lack of testing equipment.

All of the major plans [to end social distancing], including Trump’s, rely on much more testing to track and contain the coronavirus outbreak. On the low end, the plans call for 500,000 tests a day. On the high end, they call for tens of millions of tests.

But despite recent improvements, the country still faces a major obstacle to scaling up testing: a supply shortage. Every test requires an extensive supply line to work correctly — one that ensures a sample is collected from a patient, then shipped to a lab, then tested at that lab, and then, finally, the result is reported back to the patient. Each of these steps requires a whole host of people and materials to function.

And as much of the country considers opening back up, many businesses don’t have the proper equipment to protect their employees.

Last month, the Washington Post reported that the Occupational Safety and Health Administration (OSHA) received around 3,000 complaints about unsafe working conditions. Protests have already started across the US in part because employees don’t have enough masks and gloves available to work safely.

Trump has a responsibility to help the country get what it needs. Whether or not he listens to the advice of non-Republican lawmakers is a different story.

It’s all up to Trump now
Bernie Sanders leads Donald Trump in polls, even when you remind people he’s a socialist
American democracy’s Senate problem, explained
America’s failure in Afghanistan, explained by one village
Trump is rescuing Maine lobstermen from himself, and blaming Obama
Brexit is here. But what happens next?