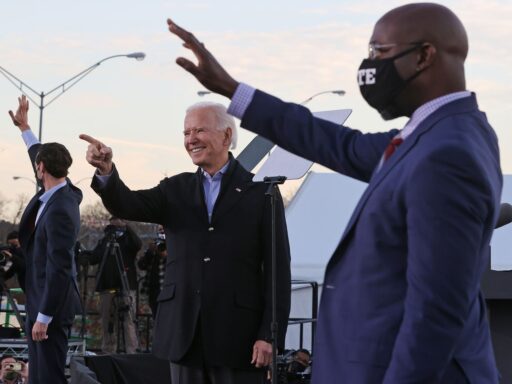 Sens. Jon Ossoff and Raphael Warnock were sworn in to office Wednesday, giving the Democrats a narrow majority in the Senate and affirming the historical significance of their victories in Georgia.

Vice President Kamala Harris presided over the swearing-in as her first act as the president of the Senate — a role she will have to play often as the decisive tie-breaking vote in a Senate split 50-50 between Democrats and Republicans.

The men represent a watershed moment for Southern Democratic politics and, in Warnock’s case, Black representation. No Democrat had won a statewide race since 2000 in Georgia, which rebuked 20 years of Republican dominance this cycle to vote for Joe Biden for president and the two Democrats in the runoff elections for Senate. And no Black politician had ever been elected to the Senate from Georgia, whose population is about one-third Black. Warnock is the first Black Democrat elected to the Senate from the South, according to Time, and only the second Black Southern senator since Reconstruction.

Warnock touched in his victory speech on the significance of his election to a seat previously held by slaveholders and segregationists, noting the changes his mother has seen over her life as a Black Georgian.

“Because this is America, the 82-year-old hands that used to pick somebody else’s cotton went to the polls and picked her youngest son to be a United States senator,” Warnock said. “So I come before you tonight as a man who knows that the improbable journey that led me to this place in this historic moment in America could only happen here.”

Ossoff, for his part, will become the body’s youngest member, at 33, and the state’s first Jewish senator.

Harris also swore in her replacement, former California Secretary of State Alex Padilla. Padilla is a history-maker in his own right as the first Latino senator from California, where Latinos comprise nearly 40 percent of the state’s population.

Laughter and then cheers as Vice President Harris announces that California has submitted a certificate appointing Alex Padilla to fill the Senate vacancy created by the resignation of “Kamala D. Harris.”

With the three new senators seated, Democrats and the independents who caucus with them now hold 50 Senate seats, with Harris as the presumptive tie-breaker. Warnock’s and Ossoff’s victories give the Democrats the numbers — albeit without any room for intra-caucus dissent — to control the chamber’s priorities.

Almost all legislation requires 60 votes to be filibuster-proof, meaning the GOP has the numbers to make some Democratic priorities dead on arrival in a highly polarized Congress. But Democrats, as Vox’s Dylan Matthews explains, can still achieve a lot of their policy goals with their razor-thin majority through the budget reconciliation process. That process allows the Senate to pass “certain legislation that primarily affects taxes and spending” with a simple majority, making the chamber’s newest senators invaluable to Biden’s legislative agenda.

It also means Democrats can actually pass the legislation Warnock and Ossoff campaigned on.

The Georgia Democrats campaigned on stimulus checks. Their victories give Democrats a chance to pass them.

There are a lot of reasons Warnock and Ossoff succeeded: demographic changes in the state; unimpressive Republican turnout, possibly owing to election mistrust sowed by Trump; and years of organizing, to name a few.

They also ran dynamic, message-driven campaigns with specific promises — most notably, to deliver $2,000 stimulus checks to Georgians. The battle over the size of the checks framed the new senators’ closing arguments before the January 5 runoff.

“Their election will put an end to the block in Washington on the $2,000 stimulus check,” Biden told Georgia voters on the campaign trail, according to NBC News. “If you send Sen. [David] Perdue and [Kelly] Loeffler back to Washington, those checks will never get there. It’s just that simple. The power is literally in your hands.”

Now that they’ve been seated, Democrats have the opportunity to make good on their promise — and $1,400 individual stimulus checks are a centerpiece of the $1.9 trillion rescue package Biden is proposing. Coupled with the December legislation that put $600 in people’s pockets, the Biden team and Democratic congressional leaders say the passage of a new stimulus, made possible by the victories of Warnock and Ossoff, constitutes a promise met. (Though even that’s now a cause for a debate: Some progressives, explains Vox’s Emily Stewart, are pushing for the new round of checks to be $2,000 flat, not to be added to the previous one for a total of $2,000.)

Other Democratic priorities that Ossoff and Warnock promoted on the campaign trail include passing criminal justice reform legislation, creating a public option under the Affordable Care Act, and rebuilding infrastructure to aid rural Georgia.

Biden has said he wants his stimulus bill — including the individual checks — to be a priority for his first 100 days, according to NBC News. While the new senators’ swearing-in guarantees Democrats the votes to pass most of the package in theory via budget reconciliation, Senate Democrats’ internal divisions or attempts to create a bipartisan bill could hold up the aid. Centrist Sen. Joe Manchin (D-WV) has already cast doubt on the likelihood of stimulus checks by balking at the associated price tag, potentially complicating the Georgia senators’ ability to deliver on their promise.

Jussie Smollett indicted on 16 counts of falsifying a police report
Justin Amash just announced an exploratory committee for a bid for the White House
Joe Biden chooses Kamala Harris as his running mate
Facebook is like sugar — too much is bad for you, says a top Facebook exec
What we get wrong about misogyny
Elizabeth Warren’s new plan to reform bankruptcy law, explained