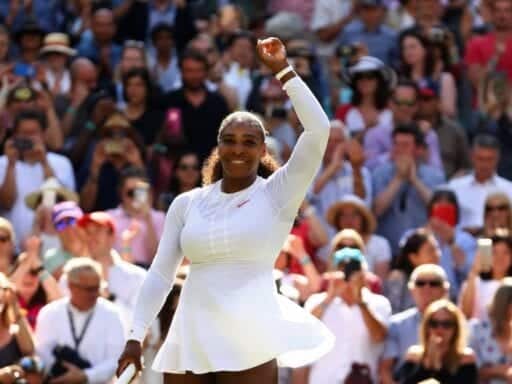 Being a working parent, even for someone with resources like Serena Williams, is still tough stuff.

Serena Williams is heading into the semifinal round at Wimbledon this week.

At age 36, just 10 months after giving birth to her baby girl, Williams is playing at the top of her game. As retired tennis great Chris Evert, now an ESPN analyst, said Monday after Williams advanced in the quarterfinal against Evgeniya Rodina, “This was as close to perfection as you can get.”

This “perfection” is all the more remarkable because we know it’s been hard won. In the months since her daughter was born, Williams has been open about the effort it’s taken to recover from childbirth and return to athletic form. She’s also been honest about the time with her daughter that she’s had to miss to accommodate her training schedule.

So at first glance, Serena Williams is the least relatable working mother in history — she has endorsement deals, a big fancy house, a clothing line, and an incredibly storied tennis career, in addition to a successful husband and beautiful baby girl. Your typical working mother packaging food in a warehouse, or fixing patients’ teeth as a dentist, or teaching a classroom of fidgeting children probably wouldn’t see Williams and think, “Gee, she’s really just like me.”

But Williams’s willingness to discuss the challenges she’s faced sends an important message: being a working parent is hard. And if the greatest tennis player of all time can admit it, so should all of us.

Williams reminds all of us: physically recovering from childbirth and returning to work is hard

Williams’s process of becoming a mother was nowhere close to effortless. Shortly after the birth of her daughter, Williams faced potentially fatal childbirth complications related to her history of pulmonary embolisms, she recalled in a Vogue cover story.

As P.R. Lockhart wrote for Vox earlier this year, “Williams’s harrowing account places her among the 50,000 women (an estimate that researchers say could actually be on the low end) in America who deal with dangerous or life-threatening, pregnancy-related complications each year. Black women are disproportionately likely to face these complications, and they are also more likely to fall victim to America’s ongoing maternal mortality crisis, being three to four times more likely than white women to die from pregnancy-related complications.”

Her road to Wimbledon has not been easy. After weeks of bedrest, Williams spent months rebuilding herself to world-class athlete status. Like other mothers who have the ability to take time off from work after having children, Williams spent time healing her body, bonding with her baby, and preparing to make her own comeback as a working parent.

Though she qualified for the Australian Open in January, Williams withdrew, citing concerns she was not prepared to compete to the best of her ability. When she headed to the French Open in May, Williams was not seeded because she was returning from maternity leave. She was ranked 453rd, forcing her to face tougher competition earlier in the tournament, which led to a pectoral injury that made her drop out. Now the World Tennis Organization is reviewing the rules about rankings after maternity leave, simply because what seemed unlikely years ago, is now becoming common: Women are returning to their athletic careers after having children.

Getting to this point in Williams’s career took concerted effort. Being a working mother takes effort too. Despite fathers becoming increasingly involved in childrearing, mothers statistically still take on the majority of care, on top of their jobs. In Williams’s case, it took months of training and rehabilitation to return to an elite level of play. Sure, Williams is financially loaded compared to most of us, and surely has a team of people to help her (providing cooking, and cleaning, and child care, and athletic training, and medical care, for starters). But the fact that she has hit bumps along the way in spite of all her resources shows just how challenging the transition to being a working mother is.

It was the opposite of how Marissa Mayer treated her return to the helm of Yahoo after having a baby in 2012. She famously took two weeks off, and still worked from home during that time. Mayer has since admitted her short leave was an exception and not the rule, but the message was clear: recovering from childbirth is relatively easy, and combining work and parenting is as simple as building a nursery next to your office.

And it’s the opposite of how parenting is often portrayed on social media, especially by celebrities — smiling children, clean houses, vacations, gorgeous dinners.

And you miss stuff

Working moms are dealt a double case of FOMO: fear of missing out on our careers if we don’t “lean in” (or fear of not making rent), combined with the fear of missing the childhood milestones like a baby’s first word, a kid’s first home run, or a teenager’s first heartbreak. Like other working mothers, who know all too well what this is like, Williams openly lamented missing Alexis Olympia’s first steps last week.

She took her first steps… I was training and missed it. I cried.

Before that, she expressed the guilt she felt when she decided she needed to stop breastfeeding. In a press conference with reporters before Wimbledon, no less, Williams shared the experience.

“I literally sat Olympia in my arms, I talked to her, we prayed about it. I told her, ‘Look, I’m going to stop. Mommy has to do this.’ I cried a little bit, not as much as I thought I was,” she said.

And Olympia’s reaction? “She was totally fine.”

Williams’s experience is a reminder to other working moms that breastfeeding doesn’t always work for everyone; that your child can still grow up strong on formula; that you’ll miss some of the milestones but not all of them. Parental guilt is completely real. But maybe if we can all admit that raising children and holding down a job can be tough, more parents would spend less time feeling pressure and guilt, and more time on the things that matter most to them, whatever they may be.

When New Hampshire polls close — and when we might get results
Pompeo blames Russia for a hack on US agencies
The Supreme Court case over adding a citizenship question to the census, explained
This week in TikTok: Bored teens are making self-isolation content
Why “essential” workers are treated as disposable
“Cannot allow this miscarriage of justice!” Trump suggests a Roger Stone pardon may be coming