Sex workers are in danger. Warren and Sanders are backing a bill that could help. 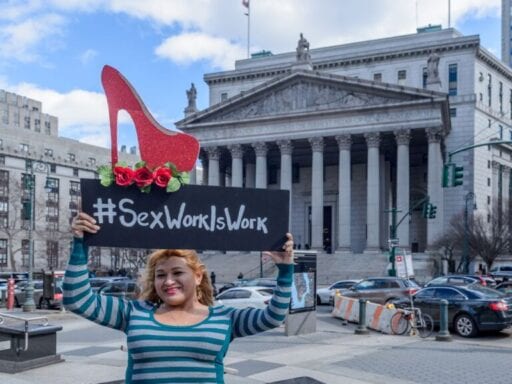 Share
Loading...
An activist demonstrates in favor of decriminalization of sex work in New York on February 25, 2019. | LightRocket via Getty Images

It could be a first step toward decriminalization.

When Congress passed sweeping legislation aimed at curbing sex trafficking in 2018, one group was largely excluded from the debate: sex workers themselves.

The end result, sex worker rights groups say, was legislation that hurt them rather than helped. They say FOSTA-SESTA — a combination of two bills, the Allow States and Victims to Fight Online Sex Trafficking Act and the Stop Enabling Sex Traffickers Act — actually worsened violence against sex workers by forcing them off the websites they used to screen clients.

“A lot more people are on the streets” in the wake of the law, Tamika Spellman, an advocacy associate with the organization HIPS, and a sex worker, told Vox in November.

Despite reports that sex workers were in danger, there was little appetite to revisit the law, and Democratic presidential candidates were unwilling to address it — until now.

On Tuesday, Khanna introduced a bill to study the impact of FOSTA-SESTA, looking at whether it has actually reduced trafficking and whether it has made sex workers less safe. Two candidates for the 2020 Democratic presidential nomination also support the legislation: Sen. Elizabeth Warren is introducing it in the Senate, and Sen. Bernie Sanders is an original sponsor.

For this legislation, Khanna worked closely with sex worker rights groups, he told Vox, including HIPS and Reframe Health and Justice, a consulting collective that focuses on marginalized communities.

If the bill passes, it could one day lead to a repeal of FOSTA-SESTA. That, in turn, could be a step along the way to the decriminalization of sex work, something sex worker rights groups have been recommending for years.

But, Khanna said, “we first have to get Congress comfortable with listening to the stories of sex workers.”

The bill could be a step to repealing FOSTA-SESTA

FOSTA-SESTA was intended to stop online sex trafficking by making it easier for law enforcement to go after websites that post ads related to sex trafficking. But the law, which passed with bipartisan support and was signed by President Donald Trump in April 2018, did not make a clear distinction between trafficking and consensual sex work.

As a result, many websites that sex workers relied on to find and screen clients were shut down. That made it harder for them to make a living, and forced many into more dangerous, street-based work. Sex workers and their advocates say some have become homeless as a result of the law, and violence against sex workers is on the rise — in just a few weeks after the law passed, the website Tits and Sass reported, 13 sex workers went missing and two were confirmed dead.

Sex workers had been reaching out to Khanna since before the bill passed, warning about these dangers. After he voted no, he said, he was contacted by advocates with Reframe Health and Justice about legislation to look into FOSTA-SESTA’s impact.

The resulting bill, called the SESTA-FOSTA Examination of Secondary Effects for Sex Workers Study Act (or the SAFE SEX Workers Study Act for short), will direct the Department of Health and Human Services to conduct a study of FOSTA-SESTA’s effects within one year. Khanna announced its introduction on Tuesday with a video on Twitter:

Today, on the International Day to End Violence Against Sex Workers, @SenWarren and I are proud to introduce a bill to investigate the unintended consequences of SESTA/FOSTA. This landmark study will be the first of its kind #IDEVASW19 pic.twitter.com/g2tRJYFYjo

Advocacy groups believe they don’t have the votes yet to repeal FOSTA-SESTA, Khanna said. Instead, the goal of this bill is to document what the 2018 law has done to sex workers. If a government-backed study produces more data to confirm what sex workers are saying, “the next step is to then repeal the bill,” or at least the parts that are having the most negative impact on sex workers, Khanna said.

He teamed up to introduce the legislation with Rep. Barbara Lee (D-CA), and Warren and Sen. Ron Wyden (D-OR) in the Senate. Original sponsors include Sanders and Reps. Pramila Jayapal (D-WA) and Alexandria Ocasio-Cortez (D-NY).

Wyden voted against FOSTA-SESTA in 2018, but Warren and Sanders voted in favor, though the candidates haven’t addressed the law on the campaign trail (the campaigns did not respond to Vox’s request for comment on the issue this fall).

But in a statement on the bill’s introduction Tuesday, Warren said, “as lawmakers, we are responsible for examining unintended consequences of all legislation, and that includes any impact SESTA-FOSTA may have had on the ability of sex workers to protect themselves from physical or financial abuse.”

For sex worker rights groups, the legislation is strategic. It could be a step toward decriminalizing sex work. Criminal penalties for selling and buying sex leave sex workers vulnerable to harassment and assault by police, advocates say, and criminal records make it hard for them to get housing or non-sex work jobs. Because of their advocacy, several presidential candidates, including Sanders and Warren, have said they’re open to decriminalization.

As for his bill, Khanna says it’s “going to be a long fight” to get it passed, but a necessary one. “It is hypocritical for our party to say we are for the most vulnerable, for the transgender community, for people of color, and not to listen to sex workers who often are part of those most vulnerable communities.”