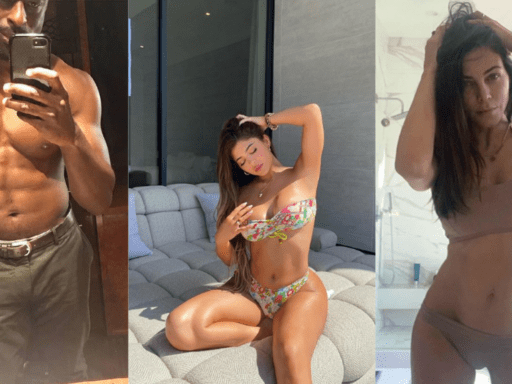 Welcome to the thirst trap election.

If you are the sort of American who is not planning to cast a ballot in this year’s US presidential election, perhaps the most important in your lifetime, then it’s possible that nothing will convince you otherwise. Although in a perfect world, every eligible citizen would exercise their constitutional right to vote (and in a perfect world, it would be vastly easier to do so), sometimes people need extra prodding.

Which is why over the past days and weeks, our nation’s professionally hot people have taken to the internet to encourage the public to vote with the best way they know how. Michael B. Jordan heroically bit his lip in a Twitter selfie begging people to vote early. Lizzo twerked as Uncle Sam. Kylie, as she is apt to do, posted a photo of herself in a bikini, but this time it linked to a voter registration site. Sterling K. Brown showed his abs, Diplo his butt cheeks.

Some have turned their voter thirst traps into specific endorsements; YouTuber Tana Mongeau photoshopped a picture of Joe Biden’s head onto a butt-centric photo which she captioned #bootyforbiden, while “gun girl” Kaitlin Bennett has been attempting her best pumpkin patch poses for President Trump.

update #bootyforbiden broke tana uncensored. love to see so many ppl who want change as badly as i do. u don’t need my ass to know what’s right for America so go VOTE! today was fun, ily

On some level, this should be an easy win for celebrities, who’ve clearly been having a difficult time during lockdown: All they have to do is what they normally do (post photos of themselves) with the added benefit of promoting a relatively political cause without any real risk of alienating fans.

It takes precisely zero effort: Instagram has made voter thirst trapping extremely easy this year. On Stories, you can add a sticker to your photos encouraging people to vote early that links to information, and many celebrities’ and influencers’ posts also link to Facebook’s voting information center, which automatically connects to the user’s home state.

Yet this hasn’t stopped people from responding to the efforts of celebrities with, largely, annoyance. “Celebrities getting naked to beg for votes is yet another downfall of 2020” reads the headline on a particularly excoriating article. When a slew of celebs, from Mark Ruffalo to Tiffany Haddish, produced a video wherein they got “naked” to get out the vote, the general response was, “Didn’t we already go through enough with the ‘Imagine’ video?”

There is a reason these kinds of posts, even under the most generous interpretation, can ring as cheesy or trite. Rosemary Clark-Parsons, the associate director for the Center on Digital Culture and Society at the University of Pennsylvania, says that for us to feel as though a social media post is made in good faith, the medium has to align with the message. “If the posts start to feel more like performance than an authentic expression of self, that’s when I think audiences might sort of lose interest, or see this more as just a branding exercise than genuine engagement,” she explains.

A clickbait video, like, say, “These Naked Celebs Have an Important Message” (a video in which, of course, you do not see any actually naked celebs) can annoy people if it feels forced.

“If we’re grabbing attention through a visibility tactic and then using that as a gateway to direct people toward more in-depth engagement, I think that can be great,” Clark-Parsons says. “Where some campaigns get into trouble is when all of the focus is on the visibility and the spectacle rather than on directing people toward a better understanding of just how complex these issues are. A great visual, whether it’s a naked celebrity or whatever, can kind of oversimplify what’s really a complicated issue.”

It also directs attention away from the message — getting people to vote — and onto the celebrities themselves. While visibility is naturally a goal with “get out the vote” campaigns, there can be downsides. “If things get too controversial, the medium itself becomes the message: The story is not getting out the vote, but the fact that there are these naked celebrities, so we’re losing track of the actual mission here,” says Clark-Parsons.

She isn’t suggesting that sex or celebrity shouldn’t be used in political campaigns — in fact, they always have been. Attractive famous people have long publicly supported candidates.

Silent film star Mary Pickford campaigned for Warren G. Harding ahead of the 1920 election, although that was orchestrated by an ad agency rather than a sign of her politics; the notoriously handsome Rat Pack were public fans of John F. Kennedy. By 1990, MTV lent the world’s most popular artists to the Rock the Vote campaign, which at one point included a commercial laced with sexual innuendo wherein a member of Aerosmith licked whipped cream off an anonymous blonde.

The social media age has extended these possibilities to anyone with internet access. Who could forget, for instance, the viral “Crush on Obama” YouTube video in the summer of 2007? (No one can convince me that this was not a crucial part of Obama’s eventual win.)

This January, an influencer called the Naked Philanthropist raised more than $1 million in contributions to Australian charities in the wake of wildfires by selling nudes for every $10 that people donated. During the Democratic primaries, a handful of Sanders supporters launched the #HotGirlsForBernie campaign on Twitter, an inclusive movement where women and nonbinary people posted photos of themselves captioned with why they were voting for Bernie, and in doing so challenged cis-heteronormative ideas of what a “hot girl” means.

Perhaps the cleverest intersection of medium and message in 2020’s get-out-the-vote drive came from a self-funded initiative called “Get Your Booty to the Poll.” The PSA, which went viral on Twitter, features a montage of Atlanta strippers pole-dancing followed by one of them asking, “Did we get your attention? Good.” What follows are the women listing all the reasons to vote in local elections and down-ballot candidates, aimed at Black men.

Director Angela Barnes said the point of the ad wasn’t to ogle naked women: “Atlanta has a strip club culture,” she told NPR. “People go out and go on dates at strip clubs, people get married and have funerals at strip clubs. People don’t go there just to see like, naked people. You go there for the vibe.”

Though some critics argued that the ad played into stereotypes about Black men, Mondale Robinson of the Black Male Voter Project defended it. “If LeBron James had on a Lakers jersey talking politics right now, no one is going to say anything,” he added to NPR. “So, if they have a problem with sisters dancing and talking about issues that are important, then your real problem is not with the issues or the sisters talking about the issues. It’s something deeply embedded in you, in what is considered decent work and not decent work.”

That some will feel annoyed by hot people using their hotness to promote something serious seems like a risk that most celebrities and influencers are willing to take. This even goes for regular people: If we’ve learned anything from the past few years online, it’s that we’ll enthusiastically join any trend that gives us an excuse to post a photo of ourselves, whether it’s a “10-year challenge” or a vague idea about female empowerment (before the same trend ultimately ended up bringing awareness to femicide in Turkey). It’s human nature to want to be seen, and posting a hot selfie in the service of getting people to vote seems like as good a reason as any.

It’s possible to criticize voter thirst traps as “slacktivism,” much like face masks and T-shirts that say “Vote,” as though the very lowest bar of democratic participation should warrant applause. But ultimately, spreading the message while socially distanced is about as much as anyone can do right now. As one Brooklyn resident told Vox in a story about voting merch, “We can’t knock on doors, which I’ve done every election cycle. A ‘vote’ mask is a reminder that there’s an election coming up. It’s the yard sign on our faces, encouraging people to participate.”

A thirst trap isn’t so different, after all. Society functions best when there’s a clear division of labor, where every person has a job suited to their interests in pursuit of the greater good. What better use is there, then, of being hot?

Schiff closed his arguments with an emotional appeal, but GOP senators seem unmoved
Why bird nests aren’t covered in poop, explained to kids
It’s not your imagination. Allergy season gets worse every year.
Tinder may not get you a date. It will get your data.
How Trump used charitable funds and a fake bidder to buy a portrait of himself
A Virginia seminary is the first school to create a reparations fund