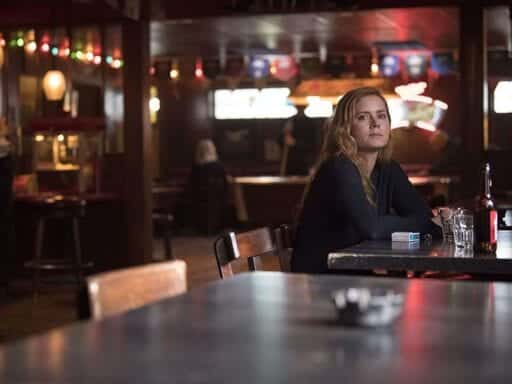 On its surface, HBO’s Sharp Objects may seem like it’s terribly uninterested in solving its central mystery. That’s partly because, as we’re regularly informed, Amy Adams’s protagonist is not there to solve a mystery.

“Remember, you’re not there to solve a mystery!” her editor (Miguel Sandoval) reminds reporter Camille Preaker early in the second episode, “Dirt.” Camille’s return home to the small Missouri town of Wind Gap isn’t to play Nancy Drew; she’s been sent there to contend with the demons of her past — a ritual every small-town Southerner knows well.

The other characters don’t seem particularly interested in figuring out who killed two teenage girls in Wind Gap, either. The first, a working-class girl named Ann, turned up dead in a pond a year prior to Camille’s return, and her father may or may not be a suspect; the other, a middle-class girl named Natalie, was gruesomely murdered and left in the center of town.

Natalie’s funeral is the main event of this episode — but if you thought the occasion might provide more plot fodder than a rote list of people to suspect, you were likely disappointed. That’s because Sharp Objects isn’t a true crime show: It’s not a whodunnit, but a classic Southern Gothic fable about crumbling towns, disintegrating relationships, obsolete legacy families, and an ugly past that must be continually confronted.

This is a Southern trope that’s as familiar as butter and molasses on a Sunday morning, but because Sharp Objects is so far wrapped in its complacent, slow-moving facade, the viewer might find it difficult to know what we’re supposed to care about at this particular point in the story. The cops don’t seem to care very much who killed Ann and Natalie, so why should we? After all, the show’s other mysteries are bigger and vaguer: What happened to Camille in the shed that time? Did her mother punish her for something by carving words of shame all over her? Why does her mother hate her, and does it have anything to do with how her sister died?

It may be a little frustrating if you came to Sharp Objects expecting Gone Girl — this is a Gillian Flynn tale, after all — and are wondering why you’re getting Cat On a Hot Tin Roof.

But don’t underestimate what director Jean-Marc Vallée is doing with Sharp Objects’ mix of heady repression and sleazy secrets. This early episode is a good moment to talk about how Sharp Objects is using its tropes to remind us how the souls of young women wind up dying — whether or not they get murdered.

Southern gothic stories depend on a sense of apathy, a tacit complicity with the status quo that gradually turns into a rigid desperation as things start to deteriorate and crumble. It’s a deceptive malaise, a sense of slow complacency that steadily subsumes every town and just as steadily erodes over the course of the narrative.

Usually in Southern Gothic stories, the malaise is a blend of geographic and sociopolitical elements: It’s always hot, windless, airless, and suffocating, and the sweltering environment serves as a pathetic fallacy for the deeper unease over whatever awful thing is at its core. (The something awful is usually some explicit secret shame, but we’ll come back to that in a moment.)

In Sharp Objects, it seems that the only character who’s heated up about her crumbling world is Camille’s mother Adora (Patricia Clarkson), who, as royal heir to the town’s fading patriarchy, is desperate to hold on to everything and everyone around her. There’s an absolutely brilliant, terrifying moment early on in “Dirt” where she does that literally, clutching her daughter Amma’s arms in what’s meant to be a motherly gesture of protectiveness but instead is vice-like and sinister.

But the last thing Adora wants to do is solve murders, and nobody else is really acting out of urgency; instead, we get scenes of apathy and even active resistance to murder-solving. The big-city detective, Willis, (Chris Messina), and the small-town police chief, Vickery (Matt Craven), clash over Willis’s wish to observe funeral attendees and their potentially suspicious behavior.

Vickery ignores an eyewitness report that indicates the killer could be a woman. Camille meanders her way to hint that Natalie’s brother could be another suspect. Camille and her mother clash over her attempts to take discreet reporter notes during the funeral — and I’m fully on Adora’s side here: Girl, you’re in the front of the church, show some respect or else move to the back pew.

As with so many Southern funerals, the mourners come not to bury, but to gossip; Camille attending the gathering at Natalie’s family’s house after the funeral is the Southern equivalent of chumming the water for sharks. It’s there, while horrifying her mother’s sense of propriety by nosing around Natalie’s bedroom — and making an ethical transgression that may come back to haunt her later — that Camille recognizes a familiar figure in Natalie. Like Camille, she was the kind of girl who let her mother decorate her bedroom in shades of pink and pastels while she played outside with the boys, explored the woods, and brought home giant spiders as pets.

Later in the episode, Camille looks into a different pink-clad bedroom — that of her younger sister, Amma, another teen girl who uses her mother’s image of her to mask a rebellious adolescence. For Natalie, it was spiders; for Amma, it’s shoplifting vodka and disguising it in Sprite bottles, just like Camille before her.

This parallelism not only jars us ever further out of the story’s sense of complacency, but lays the groundwork for what will certainly be Sharp Objects’ sharpest trick in the episodes to come: framing the South’s deteriorating patriarchy around the women who’ve both held it in place and been destroyed by it.

Every true Southern Gothic story understands that the malaise of Southern life is a self-induced denialism over the causes, effects, and permanent fractures of the Civil War; that Southern hospitality is always a rigid mask for Southern atrocity.

In an early scene in this episode, Willis wonders if someone may be leaving flowers at the site where Natalie was murdered out of a guilty conscience; “Around here, we just call that being nice,” his barber answers. The barber also tells Willis that the townsfolk attempted to remove all the rocks from the lake where Ann Nash’s body was found.

It’s a symbolic attempt to ward off evil, but in the language of the Southern Gothic, it’s an attempt to purge and destroy what can never be purged and destroyed. In the South, sins don’t get washed away; they can only be buried and unearthed again and again.

If these early episodes of Sharp Objects feel ominous, it’s because the thicker the malaise, the sharper and darker the object that’s needed to pierce it. There are plenty of moments in this episode where we see the puncture marks — Natalie’s giant spider, Adora’s sinister physicality, the truant kid who’s left to casually play with a gun by his meth-addict mother. These moments all play out over the recurring backdrop of Camille’s memories — quick cuts to disturbing glimpses of the past, glimpses that hint at sexual assault, abuse, and ongoing trauma — that perpetually discombobulate us about where and when we are.

The result is that intrusions of darkness, violence, and death pierce the worldview of everyone who comes to Wind Gap, including our apathy as viewers about what we should be invested in.

To ask yourself what question Sharp Objects is most interested in answering is to mistake the show’s point: Sharp Objects is telling you that all of its questions are the same question. To ask who killed Ann and Natalie is to ask why the delicately vicious Adora hates her own daughter, and why both Camille and Adora are cultivating their drinking habits like practiced veterans. Camille is constantly drinking herself into a well-timed fucklessness, but Sharp Objects is perpetually reminding us that her malaise is a self-induced reaction born out of real trauma.

Regardless of what actual events have shaped her life, her failure to cope is the inevitable result of living in a society that perpetually expects its members to repress emotion and whitewash history for the sake of preserving a polite veneer. It’s a society that expects girls to abide by the Madonna complex for the entirety of their lives, and also expects them to quietly, politely, bear the scars if they fail.

The townsfolk of Wind Gap may be eager to ward off more calamitous forms of evil, like serial murders, but there are other ways to kill — and towns like Wind Gap doom girls like Camille and Natalie long before they’ve ever taken their first scandalous step into the woods.

The mystery behind Trump’s Twitter capitalization habit, somewhat explained
Reevaluating the role of technology in our lives
Flattening the curve worked — until it didn’t
Critical race theory, and Trump’s war on it, explained
Trump is trying to kick out foreign students amid the pandemic
How Iran sees Soleimani’s killing