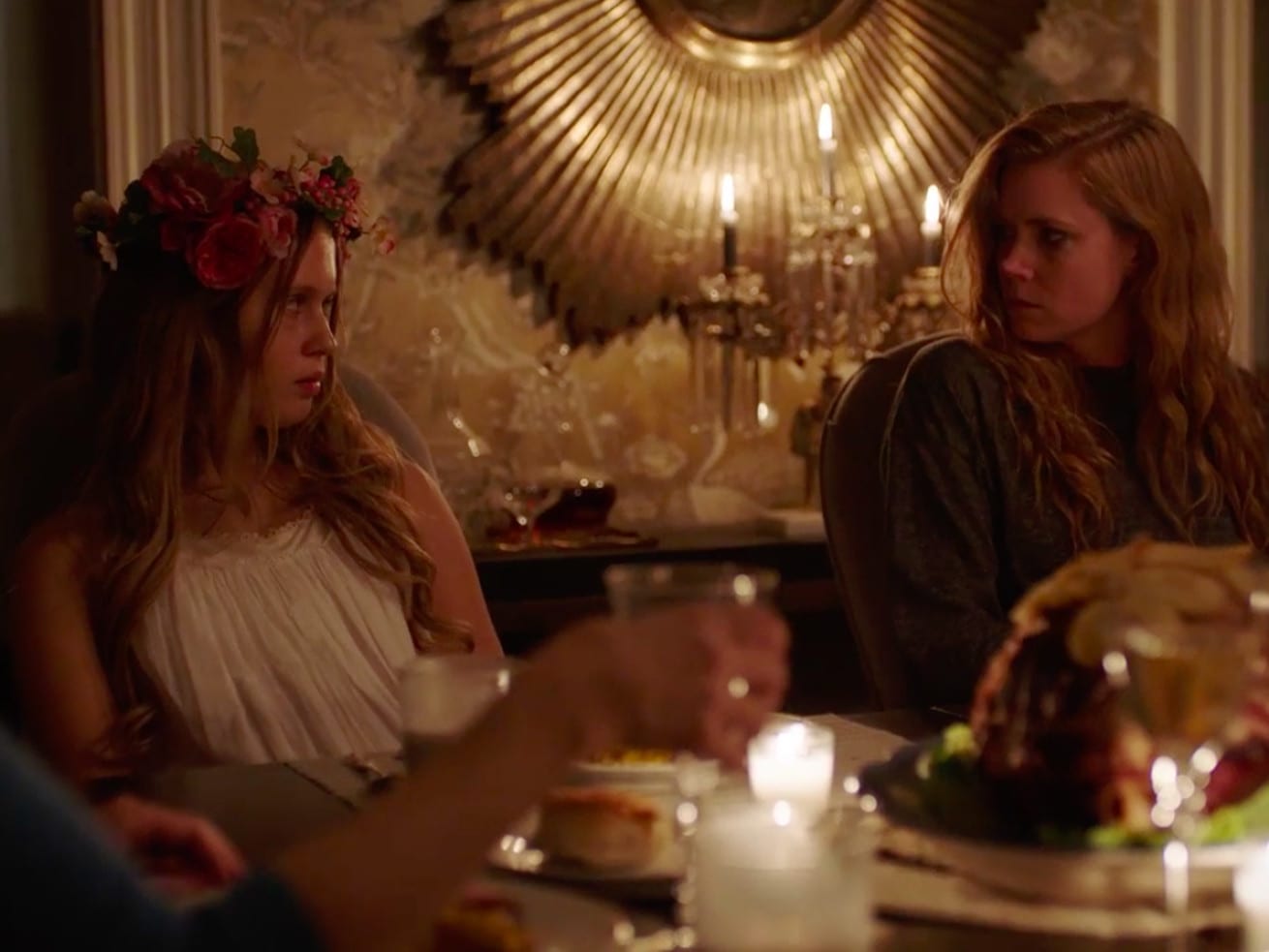 Witness the goddess of death in her element.

Sharp Objects went out with a bang — and if you were reeling as the credits began to roll, it’s understandable if you didn’t stick around to watch them.

But if you stopped too soon, you likely missed the show’s final surprise: a shocking mid-credits scene that revealed much more about the show’s central mystery than you might have suspected. Not only does the scene go into detail about how Natalie and Ann were killed, it undoes a few layers of mystery about how those murders were committed — and who actually did it. Turns out that if you thought everyone in Wind Gap was harboring some sort of secret, you were more right than you knew.

Want to know more? Read on for details, but beware — spoilers abound, including screencaps from the credits scenes that may be disturbing to some, especially if you’re just checking out the show for the first time (it gets violent!).

As anyone who’s watched all of Sharp Objects will understand, the town of Wind Gap is full of killers — or at least a few killers and a whole lot of people in the know. The season finale, “Milk,” positions two of them as the two main suspects in the murders at the center of the show — Camille’s mother Adora, who poisoned Camille’s younger sister years ago, and Camille’s half-sister Amma, who’s revealed in the final scene to have killed her former two best friends, Ann and Natalie — and who has very probably just killed again.

As the finale concludes, Adora has been convicted for the two murders her daughter committed. We don’t know if Adora suspected her daughter and thus took the rap, but one thing we know about Amma is that she’s incredibly manipulative. Over the course of the series, we’ve seen how easily she manipulates Adora and Camille, as well as her fellow students at Wind Gap’s high school.

But we don’t fully understand just how manipulative she is until the finale’s rolling credits abruptly shiver into a chilling montage. In a last nod to the show’s psychedelic editing, we get a brutally quick sequence of Amma murdering Ann, Natalie, and one other woman — her new friend Mae.

But that’s not all. If you look close, you’ll see that Amma wasn’t working alone; she had help the whole time.

It takes a village to murder a child

Right from this first shot of Amma’s new friend Mae, we know that this poor girl’s in trouble. Look at those painted nails. Remember: John Keene, Natalie’s brother, told Camille that when Natalie was found dead, her nails had been painted — something she would never do herself.

But we know who would.

The next couple of cuts show Ann, who we know was found dead in a local Wind Gap pond, being strangled by a gleeful Amma as other hands hold her down.

A couple of other shots let us see who her assistants are:

Yep — it’s Amma’s two enigmatic rollerblading buddies, Kelsey and Jodes (played by real-life sisters Violet and April Brinson). They’ve been a constant background presence throughout the show, but though they’re slightly creepy in their own way, they’ve never stood out as particularly suspicious compared to Amma. There’s no doubt who our ringleader is.

The next few shots intercut images of Ann and Natalie — including this straight-out-of-a-horror-film shot of Natalie being murdered on the floor of her family’s carriage house.

Significantly, though it’s clear Amma must have needed help to drag Natalie’s body all the way from the carriage house to the alley in the middle of town where Natalie was found — especially since she apparently left no blood trail — we don’t see whether Amma needed anyone else to help her commit the actual murder. Given that we know she’s most likely going solo when she kills Mae, it’s not a stretch to imagine her murdering Natalie by herself and then engaging her friends to help her clean up after the fact.

And we can see that escalation clearly in her face, as we get a first glimpse of Amma in full-on bloodlust mode while she’s strangling Ann:

This shot is followed by one last image of the doomed Mae — and then another shudder-inducing shot of Amma as she relishes her work:

This is the final image we see of the mid-credits scene. But at the very end, after the credits roll once again, we get one last coda: a quick shot of Amma as the Woman in White, summoning her friends to the woods — and to their deaths.

It’s clear from all of this that Amma loves murder. However, we also know that Amma’s been unknowingly ingesting regular doses of rat poison her whole life, so we’re not sure how much of her sociopathy is nature, nurture, or neurochemical.

What’s obvious, though, is that she’s fully committed to the path she’s on. If you were paying close attention to the opening scene of the finale, when Camille arrived home and walked in on her family’s demented dinner table ritual, you’ll have noticed that Amma was cosplaying as Persephone, the virginal woman who, according to Greek mythology, was abducted by Hades, the king of the underworld — a.k.a. the god of death.

As Amma noted, Persephone ended up happily married to Hades and was tasked with overseeing “punishment” for the denizens of hell. But she was also shunned by humans when she tried to return to earth. This seems to be where Amma, who throughout the season spoke repeatedly of how her friends didn’t really love her, has ended up — addicted to power and to death, but secretly craving real love and affection she doesn’t believe are hers.

The one exception? Her big sister Camille, with whom she’s already developed a creepy, occasionally psychosexual bond. After saving Amma from their mother’s attempts to slowly kill her, Camille notes that Amma can’t sleep most nights unless she’s sleeping next to Camille, who seems to be her one true source of love and companionship.

But the game is up: Now Camille knows what her little sister truly is.

Good luck sleeping next to that, Camille!

What the superrich want for the holidays: mummies, jaguar fur, and rose-gold airplanes
One Good Thing: HBO’s In Treatment will soothe your shattered nerves
State of the Union 2020: President Trump gives annual address to Congress
How Trump could theoretically get his Facebook back
How China used Facebook and Twitter to spread disinformation about the Hong Kong protests
Joe Biden’s unique Inauguration Day, in photos