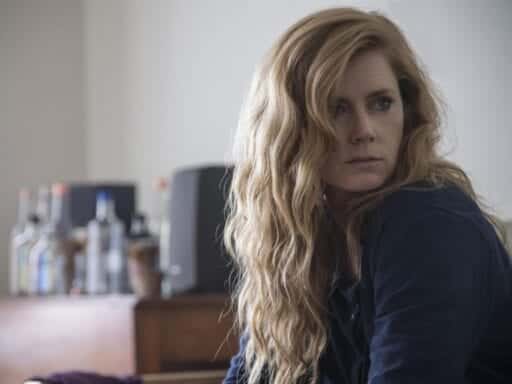 HBO’s Sharp Objects sounds completely irresistible on paper: written by TV veteran Marti Noxon and directed by Big Little Lies’s Jean-Marc Vallée, it’s the latest glossy prestige drama to be adapted from a bestselling woman-centered thriller — penned by Gone Girl’s Gillian Flynn, no less. The pitch, too, is hard to beat, with Amy Adams starring as Camille Preaker, a troubled, demotivated reporter who’s dispatched to her childhood home to cover a series of disappearing teenage girls.

So how well does Sharp Objects live up to the hype? So far, better than we’d dreamed.

Drenched in Southern Gothic tropes and wielding more double-edged charm than a bed-and-breakfast full of peepholes, the first episode, “Vanish,” packs in a host of mystery tropes: emo protagonist with a murky past, a small town with secrets, eccentric local color, it looks like we have a serial killer on our hands, and bingo. But Vallée’s direction keeps things atmospheric and intriguing without feeling too clichéd, and there are enough immediate questions to hook us.

Plus, we get Patricia Clarkson in a standout turn as Camille’s deliciously repressive mother, an old-money townie who’s keeping Camille’s younger sister Amma (Eliza Scanlen) under a tight leash while the killer — or killers — run loose.

So whodunit? And how many tiny travel bottles of Absolut will Camille consume before we find out? Vox’s Aja Romano and Alex Abad-Santos discuss.

What are your favorite things about this show?

Aja: I grew up in a small Southern town around the size of Wind Gap, so the tiny details in “Vanish” made me happy — like the way Camille’s accent immediately comes out the moment she gets annoyed, and the way it gets progressively more pronounced the more she talks to people from her hometown.

The fading town mural, the sweet tea, the “messy” house that’s primed for a visit from Southern Living, the ever-present daddy longlegs on the corner of every ceiling, the way time seems to slow down — it all just felt familiar. Maybe a little too tidy and pasted-on as a quick-hand portrait of small-town Southern life (especially for a town that’s only supposed to have 2,000 people), but I still enjoyed it.

I also can’t resist any giant house with an erratic Miss Havisham type in it, and Clarkson is just glorious.

Alex: Clarkson is totally Miss Havisham but with a better sense of design (hello, farmer’s sink). I love that she’s always in the kitchen in that blush pink gown, but no one knows what’s she’s really doing. I love the way that her character’s malevolence is just boiling under the surface. After her scenes I found myself with my hands under my armpits (one of my anxious tells), and didn’t even notice I was doing it. And that’s a testament to Clarkson’s skill as an actress.

Alex: This show reminds me, especially with the imagery in the first few minutes, of True Detective. The provincial, vaguely Southern, boldly creepy setting; the deep sense of rot and dilapidation; the way it seems like it would smell the way a bar would the morning after; and of course the murders — there are a few parallels to TD.

But what’s more riveting to me is that those murders are secondary to Camille’s jagged history. I don’t think she’s even interested in finding out who’s behind them, nor is this some kind of thrilling whodunit. In the show so far, Camille feels more dangerous — to herself and to others — than whoever is killing these girls.

Aja: Yeah, I definitely got a True Detective vibe here and there, not just because both shows are dealing with murder in the rural South, but because they both seem to be using the crime as an excuse to plumb the psyche of their main character. They’re also using a splash of magical realism that often goes well with Southern Gothic fiction (The Elementals comes to mind). But where True Detective was trawling through weird fiction tropes and tapping into a sense of preexisting mythology, I feel like Sharp Objects, so far, is mainly drawing on true crime tropes and keeping things literal.

I do think we may well end up in a similar “the murderer doesn’t matter” vein here, though; we get a strong hint in this episode that Camille’s editor (Miguel Sandoval) has sent her back to her hometown for a different reason, and the murders are just a cover. Whether that reason is just to get her to sober up and grow into a real reporter, or whether it’s to realize her true role as the Yellow King and ascend accordingly, I guess we’ll find out.

Alex: That relationship is definitely something deeper than writer-editor. I don’t think any editor I’ve ever had would send me home to solve murders to help me find my groove, nor would I want them to. Yet he’s really the only “good” parent we see in the first episode, and his presence as that archetype is especially pronounced considering how brittle Camille’s relationship with Adora and her stepfather is.

When is this story taking place? Is it purposely confusing?

Aja: The timeframe didn’t confuse me because it’s not that unusual to see people from the South dressing like they’re from the ’50s on any given day. (Actually, Amy Adams’s unkempt down-dressing reminded me of the famously dowdy look of The Killing’s lead female detective.) And we had a steady stream of smartphone shots guiding us through every new narrative sequence, so nothing felt too dated. But the narrative convergence between past and present definitely does a lot to make things tense, and I think we’re definitely supposed to be on shaky ground regarding just how long it’s been since Camille left town.

I’m happy to see It’s Sophia Lillis playing young Camille, in flashback scenes that make present-day Camille’s constant drinking and clear trauma seem rooted in more than just her sister’s death. Then again, we don’t know how, or really even when, her sister died, and her bedroom slash mausoleum doesn’t give us any timeline clues. Plus, I was really thrown when it became clear her sister barely knew her. What’s up with that?

Alex: I’m not totally sure how much of anything we’re supposed to believe, nor how much we’re meant to question. I have a vague idea about the timeline, but I also love how the show is made to feel disorienting: Camille is an unreliable narrator, and while the characters in town at this point feel a little cliché (e.g. the brassy woman, apparently the town’s designated sass dispenser, who accosts Camille before she joins the search party), it feels like there’s something dwelling behind each of these stereotypes, waiting to be revealed.

I think it’s a credit to director Jean-Marc Vallée’s talent that he can give us something as dreamy and chilly as Big Little Lies version of Monterey, California, then give us this woozy, drippy, stagnant town of Wind Gap. It underlines how the days of Camille’s life all bleed together, how she can’t escape it. And there are points where I can imagine the strain and burden of what it would feel like to be her and live in Wind Gap, and want to escape too.

Aja: I really love not only the visual editing, which our colleague Todd VanDerWerff examines in his full-season review, but also the sound editing, the way the soundtrack to Camille’s life cuts in and out in this jagged way, to further add to our discombobulation about where and even when we are.

I also really appreciate that the story just dives straight into its most decadent tropes: the frigid family dynamics, the terrifying eccentricity of Camille’s mother and her creepily passive stepfather, the scarring — because normally in this kind of story, these are the sorts of things that get revealed to us over time.

But plunging us right into them puts us effectively on Camille’s “side,” because we experience them not as terrifying discoveries but as well-established family traits that, at most, just make Camille seem more tired. Not only does that further complicate our understanding of what normalcy is for this community, but it leaves me wondering: If that’s the starting point, how much more bizarre does this story get?

I think it’s hilarious you thought the brassy woman was a cliché, because the most unrealistic thing about her to me was that there’s only one of her (so far). But then this isn’t Steel Magnolias, and it seems clear that most of the established relationships on this show are manipulative and superficial (small Southern town bingo card almost full!). Is anyone worth rooting for yet? I think I’m rooting for Camille and Amma to find a way to connect — and for her mom’s housemaid to find a way out of that creepy maid uniform.

Two of the year’s best movies are coming to Netflix
Hurricane Dorian gains strength again as it heads toward Canada
How to avoid wedding drama
The crucial debate Democrats almost had in South Carolina
What we know about the experimental Covid-19 treatment Trump received
The Trump administration’s new “birth tourism” policy, explained