Should we mourn the death of American cheese? 8 experts weigh in. 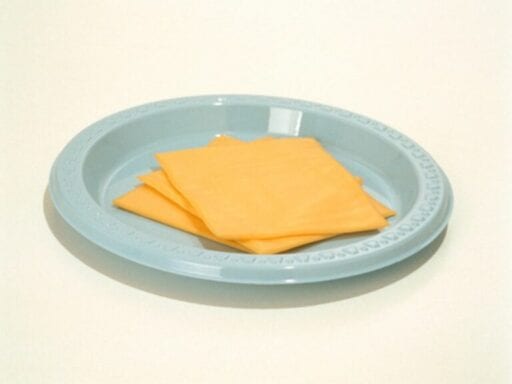 Everyone grieves in their own way.

American cheese as we know it is dead, at least according to Bloomberg. The culprit, as always, is millennials. “One by one,” the story reads, “America’s food outlets are abandoning the century-old American staple. In many cases, they’re replacing it with fancier cheeses.”

The evidence is strong. Fast-food restaurants, once bastions of food-adjacent products, have been on a tear to replace their artificial ingredients with real ones. Last month, McDonald’s announced it would part ways with all artificial colorings and preservatives.

At Serious Eats, J. Kenji López-Alt defines American cheese as a “product made by blending real cheese with texture- and flavor-altering ingredients” to produce something that is similar to, but not the same as, the rennet-milk-salt combo we generally define as “cheese.” It is sliced, either at the manufacturer or off a block at the deli counter. It melts exceptionally well. But even the greatest feats of engineering cannot last forever.

US sales of processed cheeses like Kraft Singles — the fluorescent orange icon of American cheese — and Velveeta are expected to decline this year for the fourth year in a row. At the Chicago Mercantile Exchange, 500-pound barrels of cheddar used to make American cheese “are selling at a record discount” to purveyors who will instead cube them up and turn them into party platters.

Millennials, we know, are health-conscious and spend their spare time killing industries. That they are moving away from processed slices of orange cheese product is not surprising. At the same time, does not American cheese have merit in some way, if only as a testament to American ingenuity, and salt?

To help us process this news, I asked eight experts for their thoughts on the death of the processed cheese slice.

I know people probably want to hear restaurateurs and chefs wax nostalgic about American cheese, but let’s be honest: American cheese is crap. There are so many great cheeses on the market right now. You can buy 10 varieties of Cabot at any Mobil mart on the I-95, and the worst variety of Cabot cheddar is still better than the best variety of American cheese. It might take a few seconds longer on the griddle to melt, but that’s because real cheese has texture and inconsistencies that make it taste so complex, which American cheese doesn’t have.

I think the best thing about foodie culture today is that restaurant customers are asking tough questions about the ingredients chefs use. Restaurants must dig deeper to find better ingredients raised by farmers and artisans that are passionate about producing something different, something of the highest possible quality. There is no better example than that of the incredibly skillful cheesemongers and dairy farmers all over the Northeast. You can call that millennials killing off foods that used to be popular; I call that progress.

I grew up on American cheese, and there is something comforting about it to me. We actually made grilled cheese sandwiches for the Randall’s staff a couple nights ago. While other cheeses make good sandwiches, nothing compares to a grilled cheese with American. It’s also a key component for our mac and cheese sauce — I find it adds an extra level of gooeyness. I can’t see American cheese ever really being phased out, and I don’t know what could realistically replace it.

“Millennials Kill Again. The Latest Victim? American Cheese” is a misleading title, because what the article is about is millennials not wanting to eat processed, fake cheese anymore. They love real American cheese, which is made from milk, rennet, and salt. What they’re rejecting is processed cheese.

Cheese is very uncomplicated — the base recipe for cheese, no matter where in the world it’s made, is pretty much always the same. So when we say “American cheese” as a substitute for processed cheese, we’re conflating two different things. Processed cheese like Kraft Singles, which is what this article is talking about, are made from hydrogenated vegetable oil, and there are all kinds of ingredients in there that make it not cheese, which is why they’re actually not allowed to call Kraft Singles cheese, legally. They have to call it a cheese food product.

As someone who writes about cheese for a living, who talks to people about cheese for a living, and who has been doing that for a long time, I’m more than happy that millennials are saying, “We want real food made from real ingredients.” Besides rejecting the food itself, they’re also rejecting a sort of larger picture: the global food conglomerate. They’re rejecting not just the flavor of Kraft Singles, which is vile, but also the value system that makes Kraft Singles popular.

I don’t like American cheese — I’ve always thought it was kind of gross, and I won’t serve food I’m not proud of. It just doesn’t seem like cheese to me; it’s too plasticky and chemical-y. We made an early decision to prioritize working with local producers and use high-quality all-natural products, preferably organic. We felt like American cheese just didn’t back up our brand positioning and our point of view about our food.

Yeah, American cheese melts well — meaning it melts a little faster — but I’ll put a grilled cheese made with Tillamook medium cheddar up against one made with American cheese any day and bet the farm on the Tillamook cheddar. Monterey Jack and creamy Havarti are also fantastic melting cheeses but can be a bit mild for some, so we like to combine those with smaller amounts of cheeses with a stronger flavor, like Italian-style fontina, goat cheese, a sharper cheddar, or even Gruyère.

As a kid in Toledo, Ohio, my favorite thing to make with my mom was Velveeta Cheese Dreams [toast wrapped around Velveeta] with Taystee white bread. I absolutely loved making it with her — dipping, rolling, and freezing. Then when company came over, putting it under the broiler and wow, what a delicious dish.

Now my tastes have shifted quite a bit. There are so many really, really wonderful cheeses out there that aren’t loaded with most of [artificial] ingredients and that have a ton of flavor and melt really, really well. One of our favorite things to make is a delicious tomato soup with a grilled cheese, and unfortunately, I have to say we don’t make it with Velveeta. Demands and taste buds do change and will continue to. There was a time to buy all canned goods, freeze everything, and eat American cheese. Although I’m old, I agree with the millennials on this one.

Gordon Edgar, cheesemonger and author of Cheddar: A Journey into the Heart of America’s Most Iconic Cheese

The article is about a decline in the production and consumption of American cheese, but there are still hundreds of millions of pounds of it being made a year — it’s not like it’s an endangered species. Right now is actually an especially hard time for dairy farmers and small-production cheesemakers. They’re the ones who are really endangered! Talking about American cheese as if it’s going to go the way of the pterodactyl or whatever is a little funny, but I get it. It’s reflecting something that’s real, which is that there’s much more consumer desire for natural cheese as opposed to processed cheese these days.

When I started to research processed cheese, I realized it’s over 100 years old. It does have its own history and its own — I hesitate to say integrity, but it has a reason for being. It’s a way to sell things, by preserving the protein of milk even longer than traditional cheesemaking can. I’ll go philosophical here: If the purpose of cheese is to extend the life of milk, and you’re taking a protein and you’re making it last longer to ensure that your community or your farm or your family has something to eat down the road, processed cheese is an extension of that logic — though at the cost of flavor, the taste of an individual region, and small farms.

I won’t turn my nose up if I go someplace and they serve me a burger with processed cheese. I’m not going to freak out about it, but I don’t choose it. It just tastes artificial to me. But in many places in many regions, there’s kind of an affinity for it. You have your cheesesteak in Philly, your Provel in the Midwest, your queso dip in certain parts of the Southwest. There’s tradition around that, so I don’t want to totally dismiss it. Comfort food is important. And comforting.

There are lots of things that are American that we should probably be ashamed of, but I think American cheese is a pretty awesome American invention. I like it on its own as a slice — I’ve had several slices today myself — but I also think it’s really good on a burger, in a grilled cheese. I like folding it into scrambled eggs at the last second; it gives them a nice cheesy consistency. One could argue, well, couldn’t you get that result with a nice soft Brie? And you certainly could, but it would be a slightly different flavor profile.

Don’t get me wrong, I’m not saying it’s the best type of cheese. Is it ever going to be as glorious as a Roquefort or whatever the best cheddar is? Probably not. But does it deserve its place in the diner? I think it most certainly does. And having it in your kitchen for the occasional slice mixed in with your pasta? You could do a lot worse.

Worried parents have become an easy target for online misinformation in this pandemic
Vox Sentences: Israel bars doors to 2 critics in Congress
Why are “sexy” cats a thing?
Rudy Giuliani’s fixers for the Ukraine caper just got arrested
The politics of the books we display behind us during video calls
Amy Klobuchar can win where Democrats need to win in 2020

Is this the end of American optimism?