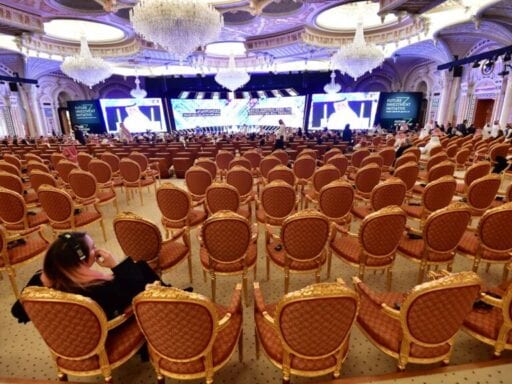 Share
Loading...
The last day of the Saudi conference last year, which was marred by last-minute cancellations. | GIUSEPPE CACACE/AFP/Getty Images

The challenge at last year’s investment conference in Saudi Arabia was convincing Silicon Valley celebrities not to abruptly cancel. The challenge this year is to convince them to show up at all.

The glitzy Riyadh gala marketed as “Davos in the Desert” is trying to recover from the Saudi government’s brutal murder of dissident Jamal Khashoggi one year ago and the excruciating meltdown of the conference that unfolded in its aftermath. Nearly all tech leaders offered last-minute cancellations and mea culpas as details about Khashoggi leaked out.

This year, in a sign of the new strains between Silicon Valley and Saudi Arabia — and of just how sensitive tech leaders are to media crises — tech CEOs and investors are snubbing it altogether.

Tech’s elite may have decided not to jet into Riyadh for the Future Investment Initiative at the end of this month, but they have also made a more fundamental decision to keep taking Saudi money. Saudi Arabia has suffered no real consequences in Silicon Valley from the killing of Khashoggi — beyond the terrible optics of being caught on camera smiling at a luxe conference directly after it.

An early copy of the speaker list for the Saudi conference, dated in mid-July and obtained by Recode, shows almost no US tech names among the 70 people who are confirmed to speak at the conference. While the speaker list shows that major players from Wall Street and investors from other parts of the world are indeed planning to be showcased at the Saudi retreat, the Silicon Valley titans that highlighted the agenda just one year ago are nowhere to be found.

Robert Mogielnicki, an expert on Saudi Arabia at the Arab Gulf States Institute in Washington, said the American snubbing of the conference mattered less than the fact that Silicon Valley companies like SAP and Amazon Web Services continue to expand in Saudi Arabia, legitimizing the kingdom as a global financial player.

“Even if there’s not high-profile representation from some of these firms, that’s a public face for one or two conferences,” he said. “There are multibillion dollar projects still ongoing or in the pipeline.”

But perception does matter in global politics, especially for the Saudis.

“To have a conference built around three tech-focused themes and not to have a substantial presence from the American technology community, and also European tech as well, I think will be problematic,” Mogielnicki said. “It’s a very visible platform to make some symbolic gesture, and ideally you would want some of the global tech titans in the crowd when you’re making that announcement.”

That roster, confirmed by Recode, of no-shows who planned to go last year includes:

But in keeping with the new hush-hush culture surrounding this year’s event, representatives for other Silicon Valley leaders who originally planned to attend last year wouldn’t answer questions about whether they’d be at the conference: For instance, Arianna Huffington, Travis Kalanick, and Peter Thiel (or their representatives) didn’t return requests for comment.

A spokesperson for the conference said in a statement that its speakers and attendees would come from “some of the world’s leading businesses and investment institutions and most innovative technology companies.”

Some new tech names have surely been added since July; the conference now boasts over 200 planned but unannounced speakers.

But other speakers have dropped out, too. One person from tech who was listed on the July speaker agenda told Recode that he had recently canceled.

“It doesn’t seem that it’s the right place to be. It’s always a balance between the Western world values and local culture which you need to respect. But there has not been too much progress,” this person said, adding that he didn’t believe “that things will improve.”

The Saudis have also advertised some “confirmed speakers” who were not, in reality, confirmed. Kai-Fu Lee, the former head of Google China, is listed on the July program as a confirmed speaker. But a person familiar with his schedule said he has never committed to attending the event, largely because of the drama surrounding the Saudi conference last year, which forced him to pull out.

The other confirmed tech speakers on the July agenda include Jim Breyer, famous for leading one of the first investments in Facebook; and Rajeev Misra, the head of SoftBank’s Vision Fund. Questions abound about the plans of Misra’s boss, SoftBank CEO Masayoshi Son, who is in the process of trying to convince the Saudis to back his second $100 billion Vision Fund. SoftBank officials declined to comment on whether Son would attend the conference.

Most folks who attend the Saudi conference typically have — or seek — some ties to Saudi money. Confirmed speakers include executives from global investment banks vying for business around the IPO of Aramco, Saudi Arabia’s massive state-owned oil company.

Other speakers reflect the reality that while American business may have drawn away from the Saudi government, other countries have flocked to Saudi Arabia in recent years. Only 17 of the 70 confirmed speakers, as of July, hail from the United States; 10 come from India and eight from China. Sources say that Chinese investors in the past year have been especially present in Saudi Arabia, backing Saudi startups and venture firms at a more aggressive pace as the US business community grows skittish.

For some American leaders, the conference — now in its third year — “doesn’t feel as relevant,” as one person put it. Some leaders attended the 2017 and 2018 events out of “curiosity” and a desire to integrate the Saudis into the world of high finance, the person said. Now that has happened. Relationships have been forged. It’s just not worth talking about them.

Those from Silicon Valley who are attending are trying their hardest to keep their visits on the down low. Family offices of American billionaires and millionaires who are trying to increase their exposure in the Middle East are still expected to show up and blend in among the thousands of attendees. So are some lesser-known venture capitalists, even if the senior partners from marquee firms are absent.

Other business leaders are expected to possibly get cute with attendance by not technically showing up at the Future Investment Initiative but by taking meetings around Riyadh in the days before or after the conference runs.

This way they are not listed as a speaker and under the klieg lights of media scrutiny but still get the exposure to other dealmakers. In an age when there is more attention than ever paid to Silicon Valley’s relations with foreign dictatorships, few want to risk the negative PR of being associated with the Saudis.

And with some sensitivity to that reality, the Saudis have taken unusually extensive efforts to shield their event from media scrutiny. The conference’s website doesn’t list any details of this year’s event on its “Partners” or “Programs” tabs, merely saying that the information will be coming “soon.” This is highly unusual, given that the event begins in less than three weeks.

Getting away with murder

Conference or no conference, there is little concrete evidence one year after the killing of Khashoggi that Saudi Arabia has suffered any serious consequences from theoretically outraged, socially minded tech leaders. While some venture capitalists say they are now asked more about their foreign ties, scrutiny of Saudi funding has largely receded.

The SoftBank Vision Fund — which is the Saudis’ principal investment vehicle into American startups — has continued to win deals in Silicon Valley, with portfolio company CEOs in interviews largely avoiding comment on Saudi involvement. Outside of the Vision Fund, Saudi Arabian-based venture capital firms have made at least 26 direct investments into American startups in the last three years, according to data from PitchBook.

In fact, more Saudi spending appears en route. The Saudi’s Public Investment Fund, the country’s $320 billion sovereign wealth fund, said earlier this year that it was planning to open an office in San Francisco as part of its effort to develop closer ties with Silicon Valley. It has not yet done so, though, and there has been no update on the timing of that plan.

In the meantime, Sanabil, which is a division of PIF, is likely to open an office on Sand HIll Road, according to a person with knowledge of their plans. Sanabil is also beginning to invest in venture capital firms as a limited partner, according to a second person.

The only consequences that might come are because of the Saudis’ increasingly poor track record. Several investors who are critical of the Saudi footprint in Silicon Valley argued that it would not be a newfound sense of morals that would lead to any rejection of Saudi cash. Instead it would be purely a selfish realization that Saudi and SoftBank money is bad for companies, a point driven home by every new Saudi startup flameout — such as SoftBank-backed WeWork.

In short, as one investor put it, WeWork has hurt the Saudis’ influence much more than Jamal Khashoggi.

“We often get asked where our money comes from, and it’s a competitive advantage for us,” said Ali Partovi, the head of Neo, a VC fund and mentorship program. “Startups are choosy about their investors, and smart startups prefer VCs known for mentorship and connections over losing money and murdering journalists.”

5 winners and 7 losers from a Succession that had much more embarrassment than usual
The Senate has agreed to an FBI investigation of Kavanaugh. Here’s what that means.
America is still failing on coronavirus testing
Vox Sentences: Israel bars doors to 2 critics in Congress
Joe Biden’s health care plan, explained in 800 words
The state of the 2020 Democratic race before this final pre-Iowa debate, explained