Silicon Valley is throwing Trump a fundraiser. They’d just rather not talk about it. 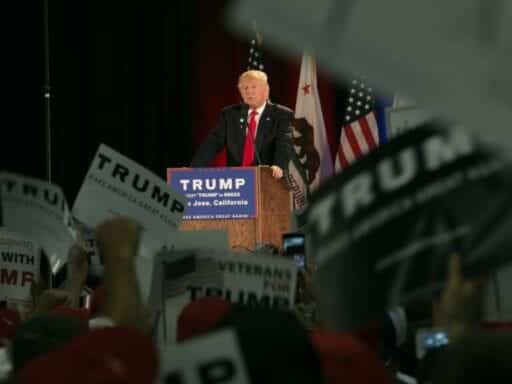 Share
Loading...
Donald Trump during his last visit to Silicon Valley — before he was president. | Elijah Nouvelage/Getty Images

The president’s first trip to the Bay Area since he was elected is shrouded in secrecy.

On most days, they are what President Donald Trump calls the “nerds,” the “totally biased,” the “geniuses in Silicon Valley that walk around in undershirts — and they’re worth $2 billion apiece.”

On Tuesday, they are his donors.

When Trump shows up in Palo Alto for his first trip to Silicon Valley since he was elected, it will unofficially kick off a new phase in the relationship between a president who is incensed with its companies but needs its billionaires. And it will reflect just how toxic Trump has become in C-suites and cafeterias alike across the Bay Area, where the few supporters he does have are borderline desperate not to talk about him.

Political fundraisers for Democratic politicians are often shows of force, with star donors paraded in bold-faced font on widely distributed invitations. But when Donald Trump shows up? In an era and an industry where each campaign donation is a publicity crisis waiting to happen, people cannot run away — or at least shut up — fast enough.

To be sure, Trump does have some big backers in Silicon Valley. But they have a consistent message: No comment.

Almost every prominent Trump supporter in Silicon Valley declined to comment for this story.

And so Trump’s afternoon visit to Silicon Valley, which is expected to raise $3 million for Trump’s reelection, is shrouded in secrecy. Democrats and anti-Trump Republicans are deeply curious about who is planning to host the fundraiser, which as of Monday was still being kept tightly under wraps in an attempt to avoid protests. (Trump’s last trip to the Bay Area — a 2016 rally in San Jose — ended in violent clashes.)

Donate to Trump? “That says a lot about your character”

The ragtag group of Silicon Valley leaders supporting Trump is more high society than high tech. They are socialites, art curators, and old-money philanthropists. There are some technologists, but they remain few and far between.

Some names are surprising. Doug Leone, the global managing partner of Sequoia Capital, Silicon Valley’s elite venture capital firm, and his wife together gave $100,000 this June to a super PAC created to boost Trump’s reelection bid. The Leones’ donations haven’t previously been reported.

Leone, who declined to comment for this story, is a longtime Republican donor, so his contribution fits a personal pattern. But as the head of an image-conscious firm, his public show of support for Trump does not fit the pattern in Silicon Valley, where leaders are skittish about even acknowledging that they voted for Trump, never mind that they gave him big money.

And while some Sequoia partners are Democrats and while Leone made the gift in a personal capacity, his gift could potentially pose a business risk to Sequoia. Leone has not been as vocal about his support for Trump as has the other top-tier VC who backs Trump, Peter Thiel, but Thiel’s firms and business associates have faced criticism and boycott threats from liberals who don’t want to boost Trump by enriching his supporters.

In the highly competitive world of venture capital, even firms like Sequoia can’t risk damage to their reputations, which they’ll need to call upon to win the favor of the next great entrepreneur — who is more likely than not a liberal.

“I don’t know how you support Trump in 2019 and don’t suffer reputational damage if you’re in any mainstream part of society,” said Catherine Bracy, a progressive organizer who works at the intersection of tech and Bay Area politics. “If you’re a Trump supporter in 2019 to the tune of $100,000, that says a lot about your character.”

Ellen Pao, an influential activist for gender equality in Silicon Valley and a former venture capitalist, said there was little distance between a personal gift from Leone and one from Sequoia itself, which has been criticized for only adding its first female senior investor in 2016.

“The fact that they’re backing someone who is an alleged sexual harasser and is rolling back women’s rights and all sorts of other rollbacks on the progress that we’ve made on social issues is not a surprise,” Pao said. “People have to decide where’s the line they’re going to draw, and I hope people draw stronger lines than they have in the past. And I think people should be judged on who they’re supporting.”

Supporting Trump in 2019 remains a tricky business in an industry that claims to value open inquiry and intellectual debate. This is a moment in history when donors like the investor behind SoulCycle face damaging boycotts and Democratic politicians call out Trump-backing businessmen — and supporting Trump is even more verboten in Silicon Valley.

The toxicity of conservatism in the tech industry dates back to even before Trump’s election, to incidents such as the 2014 ouster of Brendan Eich, the CEO of Mozilla, amid pressure from boycotters who had no tolerance for his donation to a proposition opposing marriage equality.

When news emerged that Brian Krzanich, then the CEO of Intel, was planning to host a high-dollar fundraiser for Trump in June 2016, he abruptly canceled it on the eve of the event amid outrage.

When Palmer Luckey, the head of the virtual reality push at Facebook, gave $10,000 to a pro-Trump group that October, he unleashed internal turmoil at the company. It was reportedly a factor in his ouster just six months later.

And when Thiel, no stranger to controversy, gave pro-Trump forces over $1 million in the heat of the 2016 campaign, he sparked a series of searing rebukes that led to a push to cut him out of Silicon Valley’s elite institutions, such as Y Combinator (which failed).

Nearly 99 percent of the money donated by Silicon Valley in the 2016 general election went to Hillary Clinton, according to analyzed data, and Thiel became the most divisive person in the industry — serving as something of a cautionary tale for conservatives who think they can publicly back Trump in 2020 without consequence.

That’s because while the details of fundraising events can be closely guarded, all big contributions to campaigns must be disclosed. And Trump donors can squirm when asked to talk about them.

Here’s a sampling: Luckey, who gave $150,000 to Trump’s fundraising committee in June, declined to comment for this story. Same goes for Jarrett Streebin, the founder of a startup called EasyPost, who chipped in $100,000 in April. (They are two of the top five Silicon Valley donors to pro-Trump causes since his election, per federal election records.) Krzanich wouldn’t talk about any involvement in local Trump fundraising efforts. And Krzanich’s longtime colleague at Intel, Sean Maloney, who has been one of the main fundraisers for Trump in the Bay Area since 2016, also didn’t return requests for comment.

One of the few bigger donors who is willing to talk is David Blumberg, who has given $50,000 to pro-Trump groups since the 2016 election, which makes him one of the largest disclosed Trump donors in Silicon Valley over that time frame.

Blumberg is one of many Trump supporters who see the tech platforms as biased against conservatives. While there is no hard evidence that tech platforms like Google or Facebook censor conservative views, that argument has become a cultural shibboleth on the right, stated as fact by everyone from Trump to right-wing pundit Jordan Peterson, whom Blumberg calls “a wonderful human being from Canada.”

Still, Blumberg insists that Trump supporters are all over the Valley — he said that when Donald Trump Jr. visited San Francisco last month, many CEOs showed up — but that “we generally keep our heads down” because “people who go out publicly for Republicans and for Trump can get business banned or get blackballed.”

“Conservatives didn’t drop us when we became gay or came out as gay,” said Blumberg, a venture capitalist who is gay. “It’s only when we came out politically — to the conservative side — that liberal friends dropped us.”

Some people who work with Trump donors recognized privately that their own leaders’ political donations are professional liabilities, especially when it comes to things like recruiting. Harmeet Dhillon, a lawyer who has represented tech workers like James Damore who claim bias against conservatives at tech companies, told Recode she preemptively didn’t approach tech employees to attend Tuesday’s fundraiser.

“If I get somebody fired because I invited them to attend and they were too naive, I would feel guilty about it,” said Dhillon, who expects to herself raise over $100,000 for the event.

Dhillon, one of California’s two representatives to the Republican National Committee, said she had similarly spoken the day prior with a partner at a law firm who declined to attend because he could lose clients when his donation to Trump is disclosed: “There are a lot of people who don’t want to go to this event or contribute because they don’t want to be attacked 10 years from now.”

And so it’s hard to ignore that Silicon Valley’s traditional Republican fundraising firmament is still giving Trump the snub.

Meg Whitman, the billionaire former CEO of eBay who for decades was synonymous with the Silicon Valley GOP establishment, has compared Trump to Hitler. A Whitman spokesperson said she “will not be supporting Trump in any way this cycle.”

Marc Andreessen, who was until Trump’s election one of the most voluble commentators on conservatism and Silicon Valley, didn’t return requests for comment on whether he’d back Trump in 2020. A spokesperson for Andreessen Horowitz said, “We don’t comment on politics.”

Larry Ellison, one of the wealthiest people in the world and recently one of the GOP’s biggest donors, has praised Trump’s handling of the economy. But his spokesperson declined to comment on whether he planned to back the president for reelection.

And a spokesperson for John Chambers, the former chief executive of Cisco and as powerful a Republican fundraiser as there is in Silicon Valley, said that he “isn’t comfortable commenting at this time” about his thoughts on Trump.

That’s left people like Jonathan Sun, an entrepreneur who gave $50,000 to Trump last year, as the anomalies from the tech world expected at Tuesday’s event.

Donald Trump and the crisis of elite impunity
“Empathetic hedonism”: why we were so glued to the Thai cave drama
How retailers track your every move in exchange for coupons and convenience
“No country is fully prepared”: Why the coronavirus outbreak is a huge wake-up call
What were the other 2020 Democrats doing on debate day?
Vox Sentences: Another migrant crisis in Europe?