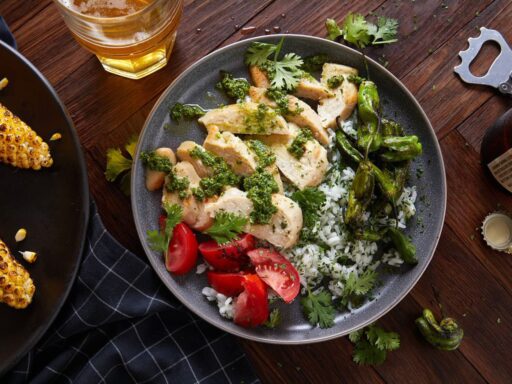 Chicken bites from bioreactor-grown chicken will be available for sale.

Currently, farms around the world produce chicken for sale by raising fast-growing chicken breeds in batches of tens of thousands, tightly packed in warehouses that are a public health hazard, a fire hazard, a worker safety hazard, and a hazard to the well-being of the chickens themselves.

What if instead we could grow the meat without the chickens?

Researchers all over the world have been chasing that dream, of “lab-grown” or “cultured” meat, for years. Today, lab-grown meat took one step closer to reality as the Singapore Food Agency approved the sale of cultured chicken meat grown in bioreactors, becoming the first agency in the world to issue such an approval. Their sign-off means that chicken bites from the US company Eat Just will be available to consumers in Singapore. (There are a few other places in the world where you can try lab-grown meat, such as an experimental restaurant in Israel.)

It’s a big step forward for a technology that stands to bring a desperately needed change to how the world eats.

Lab-grown chicken is meant to be physically identical to chicken from slaughtered animals. It’s made of genuine chicken cells, but it’s grown on a cell-growth scaffold in a factory instead of growing in a live animal. (This approach differs from plant-based meats like the Impossible Burger or Beyond Meat, which use plant proteins to create products that taste like meat; plant-based meat often tastes very similar to the meat products it replaces, but it is not identical on a cellular level.)

The same approach can be used for beef, pork, and other animal products, but for several reasons, chickens are the most appealing place to start. First, chickens represent most of the animals raised and killed for their meat in the US, and they are raised in particularly appalling conditions — making them a good first target in the effort to coax Americans away from factory-farmed food. Second, the biggest challenge for lab-grown meat so far has been getting the structure of the meat right: Lab-grown products don’t yet have the texture of tissue produced inside an animal. That would make a lab-grown steak disappointing, but it’s less of a limitation for many chicken products.

To grow a lab-grown product, chicken cells are taken from a real live chicken. The process doesn’t involve killing the animals, so producers hope they can win buy-in from vegetarians and vegans — though the target market for lab-grown meat products is mostly meat-eaters, not vegetarians. These chicken cells are then immersed in a liquid solution known as a “growth medium” that encourages the cells to multiply. Today, a serum from fetal cows is used as the growth medium, but the product’s manufacturers say they hope to switch to a plant-based one. Inside the bioreactor, the cells grow until they’ve produced chicken meat — without the chicken.

“A new space race for the future of food is underway,” said Good Food Institute Executive Director Bruce Friedrich in a statement when Singapore announced its approval of Eat Just’s chicken. “Cultivated meat will mark an enormous advance in our efforts to create a food supply that is safe, secure, and sustainable, and Singapore is leading the way on this transition.”

Getting lab-grown meat to consumers would be an enormous win for the climate and for animals. Proponents believe it might be the most feasible way to end factory farming and make our food production system sustainable. But there are still substantial barriers to widespread access to lab-grown meat.

The first is that the technical challenges of bringing lab-grown meat to the table are far from solved, despite years of effort and investment. Getting meat in a lab to imitate the texture and structure of muscle on an animal is very difficult. No one has yet figured out how to imitate, say, a steak — thus the focus on products like chicken bits, where structure is much less important.

Even replacing chicken products with lab-grown chicken products that don’t require much internal tissue structure would be an enormous achievement for the world. But there are still many hurdles to reaching that point. The existing projects, like Eat Just’s in Singapore, are small in scale, producing relatively tiny quantities of meat for specialty dishes. The meat industry kills tens of billions of animals annually. Matching that will be a challenge.

“With the numbers we have today,” UC Berkeley’s Ricardo San Martin, who studies meat alternatives, told me last year, “we don’t see how [lab-grown meat] can scale up and deliver products soon at a competitive price. Besides all of the technological hurdles, the scaling up can be very complex. So far, I haven’t seen a medium-sized operation cultivating these kinds of cells for this purpose. It’s very hard, and with what we know today, maybe it’s not the right approach.”

The next challenge — very much related to the challenge of scaling — is cost. Lab-grown meat is much more expensive than factory farming. As cell-based products grow, they’ll discover new cost savings and benefit from economies of scale. Factory farming, though, also benefits from the ability to expand and discover new cost efficiencies, and through more than half a century of optimizations, it has succeeded at making factory-farmed chicken incredibly cheap.

“The most processed cheap forms of chicken are just insanely cheap, relative to historical standards and relative to other food products on the market,” Lewis Bollard, who researches animals at the Open Philanthropy Project, told me this August. “The chicken industry has managed to cut all their corners, they don’t pay their environmental bills, they don’t pay for a lot of the public health hazards they cause. They have managed to produce a product that is just artificially cheap and hard to compete with.”

But despite the many challenges ahead, today’s approval in Singapore is cause for celebration. The world’s food system faces many challenges in the upcoming decades, from feeding a growing middle-class population worldwide that wants to enjoy the same variety of food that Americans enjoy at the same low prices, to tackling climate change, to reducing the dangers factory farming poses to public health. Progress on lab-grown meat is progress toward solving one of the biggest problems we have.

Here’s the complete list of 2019 Grammy winners
Trump’s obstruction of the 2020 census, explained
4 top 2020 Democrats vow to reverse Trump’s new landmine policy
Why movies went from 15 minutes to 2 hours
The left’s best hope to pick up a Senate seat is in Delaware
Cats’ new trailer is here. It’s very Cats.