Slings & Arrows, one of the best TV shows ever made, is finally streaming again 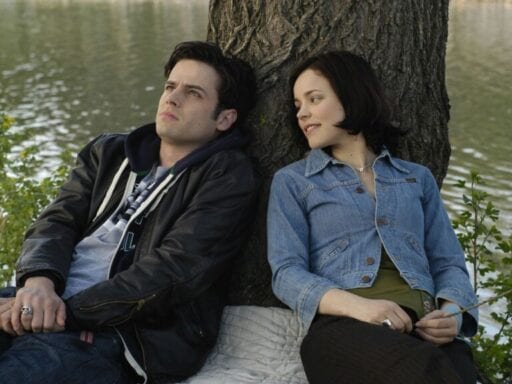 Share
Loading...
Slings & Arrows even has time for some lovely romances. And, yes, that’s Rachel McAdams right before she became super famous. And Luke Kirby before he won an Emmy for The Marvelous Mrs. Maisel. | Acorn TV

In Watch This, Vox critic at large Emily VanDerWerff tells you what she’s watching on TV — and why you should watch it too. Read the archives here. This week: the three-season, 18-episode Canadian series Slings & Arrows, newly streaming on Acorn TV.

Whenever I talk about my favorite TV shows of all time, most people have heard of Deadwood and The Sopranos. They usually smile with recognition at Buffy the Vampire Slayer and Mad Men. Even if they haven’t heard of The Mary Tyler Moore Show, they’ve heard of Mary Tyler Moore. And everybody — everybody — knows The Simpsons.

But then I mention Slings & Arrows. And people tend to pause. Sometimes I get an, “I think I’ve heard of that?” but unless I’m talking to another diehard TV fan, this Canadian gem — which aired on Sundance in the US in the mid-2000s — is often completely unknown to them.

And that’s too bad. Not only is Slings & Arrows a wonderful TV show, but it’s a warm and wonderful antidote to the bleakness of many of the other “greatest TV dramas of all time.” Its characters are trying to create something, not destroy it, and even if they squabble and bicker and argue and fight (which they do a lot), the show’s beauty is in what happens when they come together to pull off the impossible. And now, because it’s available to stream for the first time in years on the boutique streaming service Acorn TV (which focuses on English-language imported programming), you can check it out readily and easily.

Slings & Arrows is set behind the scenes of a Shakespearean theater festival somewhere in Canada (it’s loosely based on the Stratford Festival in Ontario), but it uses the idea of creating art — and especially digging in to Shakespeare — to tell stories about some of the most elemental human themes.

When I talked to the show’s creators in 2013, they told me that they structured their three seasons as a triptych, going from themes of birth (season one) through life (season two) to death (season three). And that might explain why Slings & Arrows isn’t just one of my favorite TV shows; it’s also a TV show that has taught me immense amounts about life.

Slings & Arrows captures the addictive joy of making art with people you love. Or at least tolerate.

In the first episode of Slings & Arrows, Oliver Welles (Stephen Ouimette), the stuffy and pompous head of the New Burbage Theater Festival, gets hit by a ham truck and dies. If you’re wondering whether “ham” truck is an intentional joke on a profession where even the best actors might be tempted to go just a little over the top, this show just might be for you.

Oliver is replaced as director of the festival by his old friend, protegé, and star Geoffrey Tennant (the great Paul Gross). The two men had a falling out and Geoffrey left, so his return sets tongues wagging at the prospect of this enfant terrible returning to shake up the staid New Burbage Festival. And behind the scenes of the festival, folks wonder whether Geoffrey will be able to work with his ex Ellen (Martha Burns, who is married to Gross in real life), especially after they parted so horribly when Geoffrey left the fest.

And then Geoffrey starts being haunted by the ghost of Oliver — he might be an actual ghost or he might just be a hallucination — who won’t leave his old friend–turned–enemy alone.

That central trio and their history provide more than enough drama for 18 episodes of television, but Slings & Arrows goes beyond that to tell incredibly delightful stories about the commerce of making art, about the nature of theatrical brilliance, about falling in love, and even about aging. It has hefty roles for famous Canadians who were either just starting their careers (Rachel McAdams in season one; she appeared on the show right before Mean Girls made her famous) and who were already famous when they appeared (Sarah Polley in season three). And it’s got a breezy sense of plotting, stringing numerous threads together to create something that sneaks up behind you and staggers you with its profundity when you least expect it.

Key to why Slings & Arrows works is the way in which it centers each of its three seasons on a new Shakespeare play (Hamlet, Macbeth, and King Lear, in that order), then takes many of its themes and ideas from the play of the season. It traces the process of creating a show from early inception to ultimate staging, and it captures the swooning feeling of working late into the night on a production you love with people you’ve come to love or at least tolerate. It captures how sinking into a great play can make that play feel as though it warps time, so everything is at once more elongated and much shorter than it should rightfully be, and the “to be or not to be” monologue takes five seconds but also a lifetime to play out.

I reviewed every episode of Slings & Arrows at a former job and I’ve watched it many more times for my own pleasure. It’s the kind of show that makes me feel better about television and also maybe a little bit better about humanity. It’s been only fitfully available on streaming over the years, so its addition to Acorn is a real gift. If you’ve never seen it, as one of the hacky critics who populates the fringes of this series might say, run, don’t walk.

Slings & Arrows is streaming on Acorn TV. You can also order DVDs or BluRays of it.

Vox Sentences: Lights out in Northern California
The power of Greta Gerwig’s Little Women is that it doesn’t pretend its marriages are romantic
4 ideas to replace traditional police officers
Social media is the perfect petri dish for bias. The solution is for tech companies to slow us down.
Congressional Democrats’ last, long-shot attempt at climate progress this year
Trump’s threat to commit war crimes by bombing Iran’s cultural sites, explained