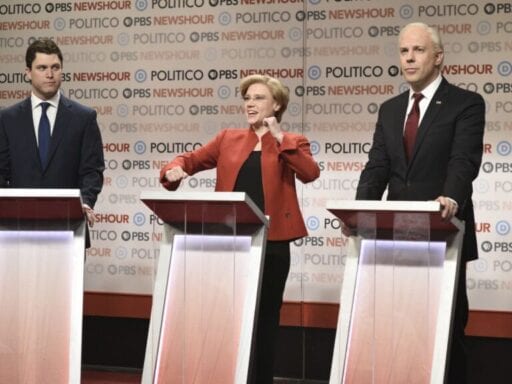 Moderator Judy Woodruff, played by Heidi Gardner, introduced the sixth debate with a nod to the stage’s decreased diversity — only one candidate of color, businessman Andrew Yang, met the participation criteria this time around.

“Just like the Bachelor,” Gardner said, “The further we go the less diverse it gets.”

As the debate kicked off, SNL used the candidates’ introductions to spoof their personalities.

Warren, played by Kate McKinnon, jumped with enthusiasm. “I’m here and I am in my element — PBS is my safeword!” McKinnon declared. “Last debate I gave you policy TMI and now I am ready to walk it back.”

Pete Buttigieg, played by Colin Jost, was overly self-conscious. “It’s wonderful to be here tonight, but I have to warn you tonight I will be in attack mode — as long as that’s okay with you guys,” Jost said.

Amy Klobuchar, played by Rachel Dratch, was bursting with new confidence following an appearance in November’s debate that was not roundly praised. “Tonight my voice will be as solid as my carefully rehearsed Midwestern mom jokes,” Dratch said.

“For 30 million dollars PBS is now owned by viewers like me,” he said contentedly. “Look, I even got a tote bag.”

After the introductions, the sketch focused on a skirmish that broke out at the real debate over Buttigieg’s recent high-dollar fundraiser at the Hall Rutherford wine caves in Napa Valley. Two of his rivals, Warren and Sanders, have eschewed high-dollar fundraisers; Buttigieg and Biden, however, have embraced them.

“I’ve never been to a wine cave, I haven’t even been to a Filene’s Basement: too much shimmer and shine,” McKinnon added.

Buttigieg retorted: “I’m the only person on this stage who isn’t a millionaire or a billionaire. I live on my mayor’s salary plus a $20 a week allowance from my parents — and that’s only if I do my chores.”

Klobuchar then interjects. “The only cave I ever go to is a man cave — I call it the Senate,” she said. “For more of these classic zingers please check out my stand up special Land of 10,000 Laughs, only on Costco+ streaming services.”

Former Vice President Joe Biden, played by Jason Sudeikis, then rushed to Buttigieg’s defense, while also celebrating his own coherence.

“Quit picking on Lil’ Bo Pete over here okay, kid’s trying his best!” Sudeikis’s Biden said. “Speaking of, have you noticed how I’m playing with almost a full deck of cards tonight? I haven’t even told a long rambling story yet!”

As the debate descended into chaos, a candidate who has exited the race — California Sen. Kamala Harris, played by Maya Rudolph — glides onto the stage with a martini.

“I was just in the neighborhood, but while I’m here, I just want to show you how good you could have had it America.”

In the final part of the skit, Gardner’s Woodruff tells the candidates that Trump has been backstage all along. Trump, played by Alec Baldwin, then marches onto the stage (with large clip-on earrings) blustering about impeachment. “You think I’m afraid?” Baldwin says. “What are they gonna do impeach me?”

Biden challenges Trump to a push-up contest — “first gotta do one wins” — but it’s House Speaker Nancy Pelosi, played by McKinnon, who closes in on Trump with the decisive strike.

“I brought you two gifts Mr. President,” she says, holding up a gift bag. “They’re the articles of impeachment.”

Feds flew an unarmed Predator drone over Minneapolis protests to provide “situational awareness”
California locked down early and took the coronavirus seriously. Why are its cases still rising?
The 5 best TV shows of August 2019
The travel ban decision echoes of some of the worst Supreme Court decisions in history
Vox Sentences: Lights out in Northern California
The US and Taliban sign agreement meant to end America’s longest war