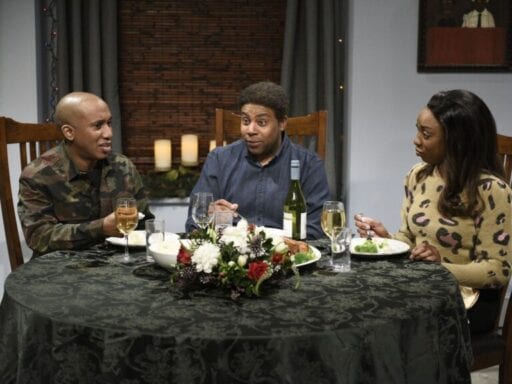 Families across the nation debate impeachment in the sketch, which features a special appearance by Kate McKinnon’s Greta Thunberg.

As impeachment proceedings continue to expose the United States’ deep partisan fault lines, Saturday Night Live stepped in to point out the things that unite all Americans — including the fact that come November 2020, we’ll all vote well aware of the realities of the electoral college system.

Saturday, the show’s cold open centered on three families with very different attitudes about impeachment: A liberal family in San Francisco, a conservative family in Charleston, and a black family in Atlanta.

In San Francisco, the family applauds House Democrats for “finally” moving to impeach Trump. Bowen Yang’s character says Trump “violated the Constitution. There has to be consequences.”

“What crime did he even commit?” he asks. Heidi Gardner, playing the conservative family’s matriarch, says pointedly toward her son that Trump is being impeached for committing “the crime of being an alpha male who actually gets things done.”

And in Atlanta, Keenan Thompson’s character begins a conversation with his family by introducing another controversial topic: whether the latest Bad Boys movie will be good. When his son, played by Chris Redd, pleads for a political discussion instead, Thompson says: “Oh, you mean how Trump is definitely getting impeached and then definitely getting reelected? I’m good.”

“What people?” Thompson asks. “White people? If white people tell you, ‘I might not vote for Trump this time,’ you know what that’s called, right? A lie.”

As the discussions continue, their divisions are clear: From Trump’s chances in 2020, to their thoughts on the Obama administration, to tastes in Christmas music, to the Democratic candidates, and to their closing prayers, the families couldn’t be more different.

Aidy Bryant, playing a snowman narrator like Sam from the Rudolph the Red-Nosed Reindeer television special, concludes by noting they families are really quite alike: “They have one important thing in common,” she says. “They live in states where their votes don’t matter, because none of them live in the three states that will decide our election.”

“They’ll debate the issues all year long, but then it all comes down to 1,000 people in Wisconsin who won’t even think about the election until the morning of,” she continues. “And that’s the magic of the electoral college.”

In a final dose of delightful absurdity, Kate McKinnon interrupts Bryant, playing Greta Thunberg — the 16-year-old climate activist who was recently named Time magazine’s Person of the Year and was promptly mocked on Twitter by Trump.

“In 10 years, this snowman won’t exist. Her home will be a puddle,” McKinnon says. “The icecaps will melt and the elves will drown.”

She ends by saying: “So Merry maybe-our-last-Christmas to all. And Donald Trump — step to me and I’ll come at you like a plastic straw comes at a turtle.”

Mitt Romney is breaking with his own party to vote for Trump’s conviction
The sudden Democratic shift in favor of impeaching Trump, explained
Democrats capture Georgia US House seat held by Republicans since 1995
8 winners and 5 losers from the 2018 Emmy Awards
Trump’s demand for Ginsburg and Sotomayor to recuse themselves, briefly explained
Purdue Pharma admits to crimes for its OxyContin marketing. But no one is going to prison.