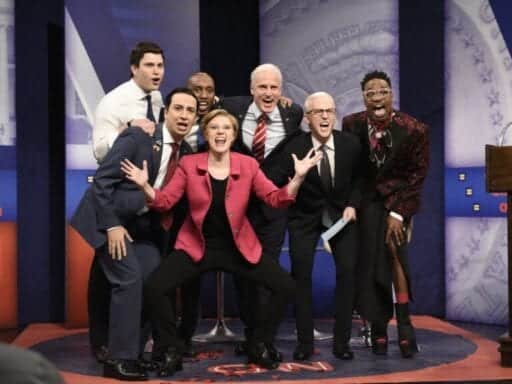 Among others, the skit featured Pete Buttigieg of “the House of Booty-gig” and “Delaware daddy” Joe Biden.

On Tuesday, the Human Rights Campaign and CNN hosted a forum in Los Angeles in which Democratic presidential contenders discussed issues relevant to the LGBTQ community. The event offered prime fodder for Saturday Night Live’s opening sketch this week, as cast members and guest stars, including Woody Harrelson and Lin-Manuel Miranda, did impressions of top Democratic candidates making their pitches to voters.

Coming after a week in which the Supreme Court debated whether workers may be fired because of their sexualities or gender identities, the forum offered Democratic voters a chance to see where candidates came down on queer issues — and the SNL sketch satirized some of the more memorable moments from that night.

There was one twist, however: Billy Porter of Pose appeared as himself alongside SNL cast member Alex Moffat (who portrayed moderator Anderson Cooper) in order to introduce each candidate as if they were competing in a drag ball.

First came Cory Booker. “He may live in the projects, but ladies, he ain’t no project,” Porter announced, a reference to the New Jersey senator’s famous decision to live in public housing after law school.

When an audience member asked Booker, played by cast member Chris Redd, about a 1992 op-ed in which he wrote derogatory things about the gay community, Booker left the stage, saying, “I don’t want you to think I’m dodging the question, so I’m going to go now.”

An audience member asked Colin Jost’s Buttigieg, “How do you respond to people who say you’re not gay in the right way?”

“There’s no wrong way to be gay,” replied Buttigieg, arms extended stiffly outwards, “Unless you’re Ellen this week.” Ellen DeGeneres, of course, faced criticism this week for palling around with George W. Bush at a football game last weekend.

Mayor Pete had released a plan for promoting LGBTQ rights in advance of the town hall this week. So did Elizabeth Warren — played in this sketch, as always, by the extremely on-point Kate McKinnon — who went viral, IRL, for joking that people who are against same-sex marriage are, essentially, men who can’t find women to date.

“I’m going to assume it’s a guy who said that, and I will say, then just marry one woman. … Assuming you can find one,” Warren said. #EqualityTownHall pic.twitter.com/RAuVqch7Ls

McKinnon recreated the set-up to the quip, before putting on a pair of purple sunglasses and offering a few alternative jokes.

“If someone doesn’t want to serve gay people at their small business, I bet that’s not the only thing that’s small,” she said. “And when people say gay and trans people shouldn’t be included in civil rights protections, well, I wish their parents had used protection.”

Then came the guest appearances. Hamilton creator Lin-Manuel Miranda dropped by as Julián Castro, and Woody Harrelson played Joe Biden, recreating some of the former vice president’s more cringeworthy moments from the night.

First, Castro made the case that he is #Latinobama, and said, “As a Democrat, I want to apologize for not being gay. However, I am Latino, which we can all agree is something.”

In an inevitable Hamilton joke, he went on, “There was once another man who left his mark on this nation’s history” as the opening notes from that musical began to play. Faced with an incredulous reaction from Moffat’s Cooper, he pivoted and said, “I was going to say Al Gore!”

Last but not least came “the Delaware daddy whose only vice is the choo-choo train,” as Porter put it: Joe Biden.

On the campaign trail, Biden has sometimes been criticized for his behavior towards women and queer people. In the first LGBTQ Democratic forum in late September, some interpreted Biden’s behavior towards the female moderator as patronizing. At this week’s forum, he made a few slightly strange jokes about being gay while seeming to meander in his efforts to signal his support for the community, a tone that SNL ran with.

“Look, you know me, I went to bat for marriage equality and I believe we’re all equal,” Harrelson’s Biden said, “Whether you’re gay, lesbie, transgenital or queef, you’re okay with Joe.”

He then proceeded to hit on an audience member (“If I told you you had a beautiful body, would you hold it against me?”) before launching into a story about “well-dressed men” to signal his longstanding allyship.

In closing, he smooched Cooper — something the real Biden came pretty close to doing at the actual event.

Trump’s response to impeachment: attacking the late husband of a pro-impeachment Democrat
A new, big review of the evidence found that Alcoholics Anonymous works — for some
John Delaney has a plan for universal health care — but don’t call it “Medicare-for-all”
The 2020 summer Olympics will be postponed due to coronavirus
Christine Ford’s story isn’t over
Democratic voter drop in Kentucky historic? Maybe