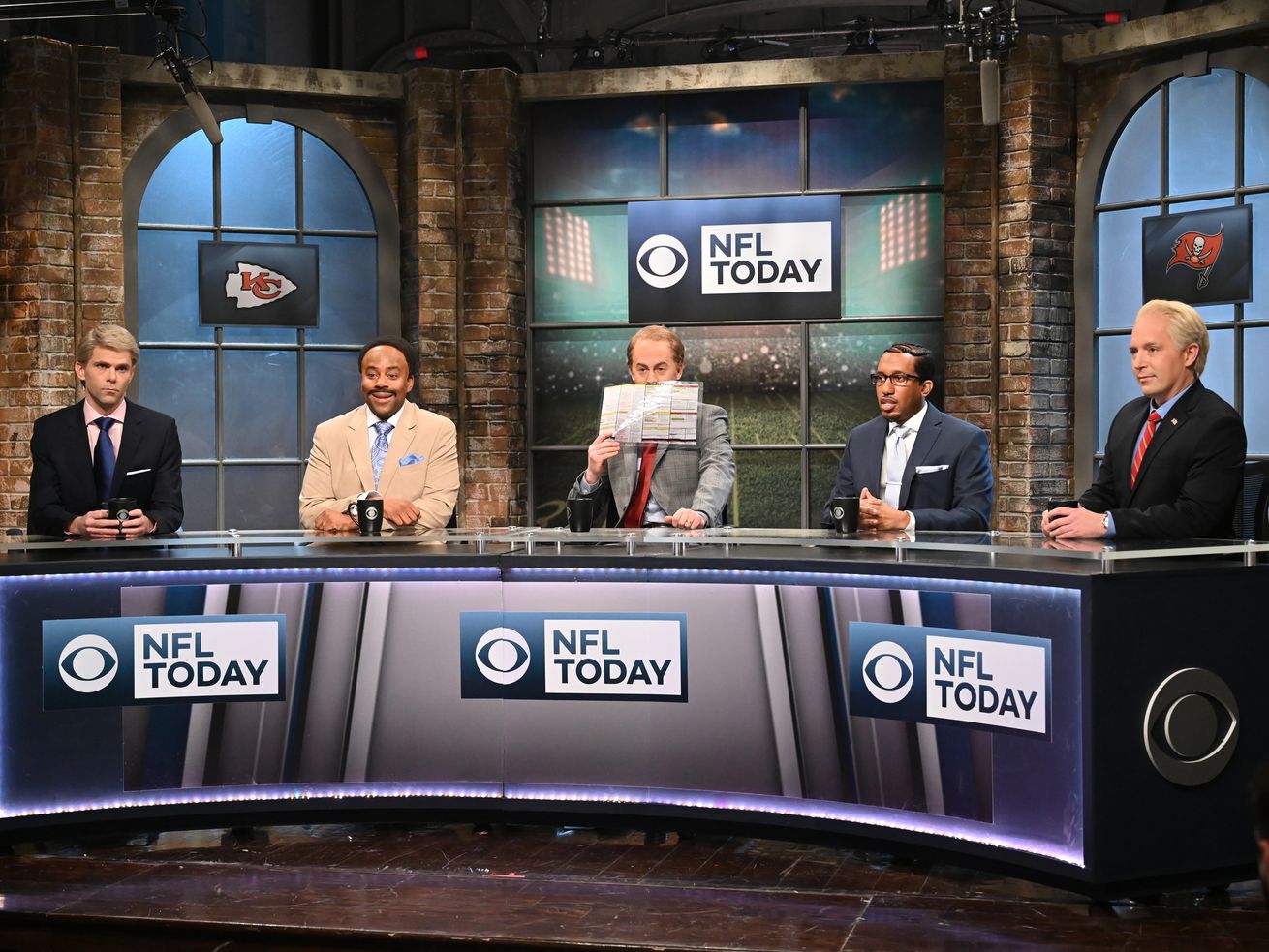 Saturday Night Live’s opening sketch for February 6 parodied the tradition of the Super Bowl pre-game show, and spoofed corporations’ efforts to insert social and political commentary in their commercials.

Kenan Thompson, playing CBS sportscaster James Brown, kicked off a panel discussion with a summary of 2021’s major events: “This year has been anything but normal. The pandemic, racial and political divisions, Armie Hammer. But today we come together in the spirit of unity to watch football and murder billions of chickens, for their delicious wings.”

Thompson’s Brown then took a jab at the NFL’s battle to keep Covid-19 cases low among its players. “The league also dealt with so many Covid restrictions this year but with hard work and vigilance, we were able to get through he season with only 700 cases. Hurray us,” he said.

“The NFL’s incredibly careful, and if you test positive they will ask you to cover your mouth with a play chart,” quipped Alex Moffat, playing former Pittsburgh Steelers coach Bill Cowher.

A number of experts say that the NFL actually did a fairly good job in keeping community spread low in reality, by tightening regulations following outbreaks among its teams early in the season, by mandating a strict masking policy, and by using a sophisticated testing and contact tracing system to keep transmission rates low among its thousands of personnel.

After poking fun at the league, the panel of sportscasters turned their attention to the Superbowl’s commercials, first highlighting brands’ often unwieldy efforts to promote both a product and a “socially conscious” message.

A commercial plays featuring montage of prominent Black civil rights heroes, social justice icons, and Black Lives Matter imagery ends with the narrator saying: “We must always strive for equality, and we must always reach for Cheez-its.”

The hosts then watched an ad meant to “balance out” more progressive ads, a commercial for Papa John’s that lampooned the brand’s alt-right support, and its founder’s use of racist language by incorporating a white supremacist hand gesture as well as several messages meant to win the businesses of QAnon adherents, like promising the pizza contains “no additives, no preservatives, and no child sex trafficking in the basement.”

QAnon, of course, falsely posits that there is a global child sex trafficking ring controlled by cannibalistic Democrat pedophiles. And to that point, the commercial’s voice over continues: “Sorry Democrats, you’ll have you get your child sex pizza over at Hillary’s Pizzeria,” in a reference to the Pizzagate conspiracy theory of 2016.

To close out the discussion, the sportscasters took turns making predictions.

“I predict that at the end of the game, Covid will address the Florida crowd and thank them for an incredible opportunity,” Moffat’s Cowher said.

The Tampa Bay stadium where the Super Bowl will be held will be at about a third of its capacity — but bars across the state will be open, leading to warnings from federal health officials to stay home to avoid coronavirus infection.

The stimulus law’s student loan payment freezes, explained
7 key moments from Joe Biden’s inauguration special
The Lost Year: Exercise in quarantine, keeping a business alive, and the unusual intimacy of Zoom
Why White Castle has become a Valentine’s Day dinner destination
I walked out of rehab and into a pandemic
The messy reality of Donald Trump’s poll numbers