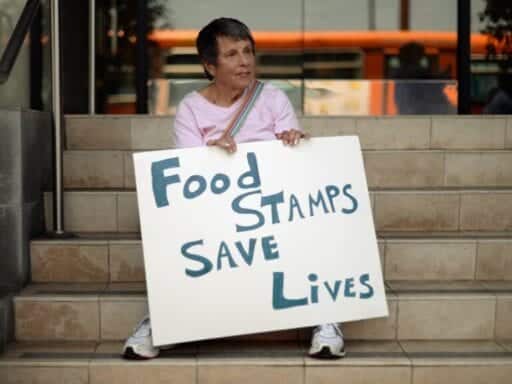 The US Census Bureau just dropped its annual load of statistics on American poverty and income, and the data shows that 2017 was a good year for many Americans, and not-so-great for others.

On the downside: Women still earned about 80 cents for every dollar a man earned, incomes grew slower than they did in the previous two years, and that income growth mostly benefited the richest 10 percent of US families.

The bottom 10 percent of US households — earning an average income of $14,219 — saw their incomes fall slightly compared to the previous year, adjusting for inflation. But one of the most striking data points shows the massive economic impact that federal entitlement programs, such as food stamps and housing subsidies, have on low-wage workers.

During President Donald Trump’s first year in office, income from these safety net programs directly kept 44.9 million people out of poverty in 2017. That’s 200,000 more people compared to 2016. So far, Trump and congressional Republicans have been unable to gut spending on the safety net programs they have long despised, facing resistance from Democrats whose votes they needed to pass a budget deal in March.

Of all the social safety net programs, Social Security had the biggest impact last year, keeping 27 million people above the poverty level, which was $12,060 for an individual in 2017. Refundable tax credits, such as the earned income tax credit, helped another 8.3 million people. Food stamps (a.k.a. SNAP), disability insurance, and housing subsidies each kept about 3 million people from falling into poverty.

That good news, however, was (partly) canceled out by one of the most persistent drivers of economic hardship: health care costs. In 2017, out-of-pocket medical costs, which includes health insurance premiums, copays, and prescription drug costs, pushed the incomes of 10.9 million people below the poverty threshold. That’s 400,000 more people who were impoverished by medical bills in 2017, compared to last year.

This chart sums it up quite well:

That said, the census data also suggests an exception: Obamacare, which remains in place despite the current administration’s efforts to cripple it, is not lowering health care costs enough to put a huge dent in the official poverty rate. More importantly, it suggests that current Republican efforts to slash welfare spending, and the president’s efforts to sabotage Obamacare, will just make Americans a whole lot poorer.

The rosy view from the White House

The White House is quite happy with the new census report, or at least, President Donald Trump’s economic advisers seem pleased.

In a statement released Wednesday, the president’s Council of Economic Advisers said the new report signals that the effects of a “strong economy are reaching Americans throughout the United States.”

The council downplayed the impact of the safety net programs — long detested by Republicans — on the country’s economic health. The official poverty rate (which is based on outdated, limited economic factors) dropped from 12.7 percent to 12.3 percent. And the Supplemental Poverty Measure, which includes more forms of income, showed a more modest drop from 14 percent to 13.9 percent.

Yet the White House tried to make the case that these social programs are doing more harm than good.

“While absolute material hardship has declined, less success has been achieved in strengthening self-sufficiency. Employment rates of non-disabled working-age adults have been stunted, and their dependency on welfare programs has grown. It is important to ensure that welfare programs do a better job of promoting work, especially in today’s hot economy. Expanding work requirements in welfare programs can help achieve that goal,” the economic advisers wrote in their statement.

The idea that welfare is keeping people from working is a deeply entrenched belief within the GOP. There is some truth to it, but research shows that the incentive to avoid working is actually quite small, and many of the federal government’s biggest social programs already have work rules. These requirements were implemented as part of the 1996 welfare reform legislation signed by former President Bill Clinton.

For example, one program that has work requirements is the Supplemental Nutrition Assistance Program, often known as food stamps. Beneficiaries who are not disabled, and have no children, must work 80 hours a month, or show they’re meeting other similar requirements.

But in regard to other programs that don’t require beneficiaries to work, such as Medicaid — most of the recipients work anyway. Two out of three Medicaid recipients have jobs, and the rest are mostly people who are ill, disabled, retired, or taking care of a family member.

Vox’s Alvin Chang and Tara Golshan reviewed the research on the impact of forcing welfare recipients to work in exchange for benefits, which is something several states have tried. They say the rules did increase employment among participants, but only by very little, because most beneficiaries were already working. And they note that the requirements didn’t do much to lift people from poverty:

Work requirements barely caused poverty rates to budge, partially because even people who found work weren’t earning enough to lift themselves out of poverty. In addition, at half the experiment sites, work requirements caused more people to be in deep poverty.

The fact that work requirements don’t seem all that effective in helping keep Americans out of poverty hasn’t discouraged Republicans from pushing for more work rules, or from trying to slash millions of dollars in spending on the social programs that seem most effective in preventing economic hardship.

Republicans are chipping away at the social safety net

Trump can’t cut all this from the budget without Congress, and Republican leaders on Capitol Hill would love to do so. The president’s proposal mirrors budget plans House Speaker Paul Ryan proposed when he was the House Budget Committee chair.

Congress is still trying to hammer out a spending bill to fund the government in 2019 and will need to get some Democrats on board to avoid a potential shutdown. So they might not be able to squeeze the social safety net as much as they are hoping they can.

For now, though, Republicans are toughening up work requirements, hoping it will knock people off welfare.

In January, the Trump administration let states to impose work requirements for Medicaid, which provides health care to Americans who are poor and disabled. Then in April, Trump told his Cabinet to find other social services on which they could add work requirements or make existing rules harsher.

And in July, House Republicans passed a farm bill that imposes strict work requirements on food stamps, but the Senate took them out before passing its version. Ryan hasn’t given up.

“In this economy, with all of the opportunities available, there could not be a better time to help more people move from welfare to work,” he said at an event in July.

This popular GOP solution to deal with poverty conveniently leaves out an important fact: Millions of full-time workers qualify for welfare because businesses pay them poverty wages. Wages are hardly rising, and these social welfare programs could be the only reason millions of low-wage workers have food on the table.

So while this year’s census data shows that safety net programs helped millions of low-income Americans pay their bills and feed their families, if Trump and his fellow Republicans get their way, that might not be the case next year. The numbers from the next report may not be as rosy.

After a rough week, Trump fumes about Cohen, Mueller, and Sessions on Twitter
Why social conservatives are disappointed that Trump picked Brett Kavanaugh
Trump may soon ban Russian spy flights over US military bases. That’s a bad thing.
“It’s just a big illusion”: How homeopathy went from fringe medicine to the grocery aisles
Russian state media: Trump and Putin are BFFs now
The current hunger crisis in the US, in photos