Some businesses are refusing to hire DACA recipients. They are fighting back. 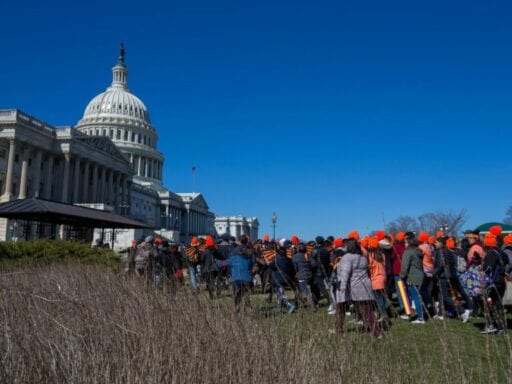 Daniel Marques would probably be working as a financial adviser for a big investment firm in New Jersey right now.

David Rodriguez might have landed an internship with Procter & Gamble in Miami.

Sandy Vasquez might be an engineering intern in Silicon Valley.

Ruben Juarez might have snagged a finance internship in Connecticut.

All four of them went to college and graduated with honors. And all four of them say they were denied jobs, even though they had valid work permits because they are part of the Deferred Action for Childhood Arrivals program, known as DACA.

The Obama-era program began in 2012 and offers temporary work authorization and deportation relief to qualified undocumented immigrants under the age of 38 who grew up in the United States. In January and February, two federal courts ordered the Department of Homeland Security to continue renewing work permits for DACA holders after President Donald Trump tried to end the program in 2017.

As the legal battle over DACA continues to wind its way through the courts, a related legal battle is on the rise. DACA immigrants are suing US employers for denying them jobs because they aren’t citizens. Despite presenting valid work permits from US Citizenship and Immigration Services, recruiters at several large corporations told them they only hire US citizens or immigrants with green cards. Some said they only hire employees whose work permits don’t expire (DACA must be renewed every two years).

DACA workers say these actions are a form of citizenship discrimination prohibited under the Civil Rights Act of 1866. At least four DACA workers who were denied jobs in New York, New Jersey, Florida, and California are suing the companies that turned them away using that argument.

The outcome of these class-action lawsuits has huge implications for American companies, and for the estimated 700,000 immigrants with DACA status who are living in the United States. A verdict in favor of the workers could force businesses to change the way they treat job candidates enrolled in DACA, giving them the same chance to land a job as anyone else. It would also open the door to other groups of authorized workers who are affected by some of these hiring restrictions: refugees, asylum holders, and victims of human trafficking.

So far, DACA workers seem to have a good chance of winning. In April, a federal judge in Florida ruled that DACA recipients are a protected class, and allowed the lawsuit to proceed. A federal judge in New York came to the same conclusion in the first DACA lawsuit filed in 2014. That case was eventually settled.

The first DACA worker to file a discrimination lawsuit was a 25-year-old college graduate from Yonkers, New York. It was 2014, and Ruben Juarez had just graduated with an undergraduate degree in accounting. He recently had been accepted to Fordham University to pursue a master’s degree in global finance.

But a year earlier, Juarez was denied a paid internship at the largest life insurance firm in the United States because of his DACA status. A recruiter for Northwestern Mutual had contacted Juarez about the internship in 2013 after receiving his résumé. He was invited to the company’s offices in Connecticut with 50 other students for an informational interview, and was later called back for an individual meeting. After the interview, the recruiter asked Juarez for his work papers, and he gave her his Social Security number. Then she asked if he was a US citizen or if he had a green card. He said he had an employment authorization document through DACA.

Later, in an email, the recruiter told Juarez that he needed “to be a US citizen or hold a green card” to get the internship. So he didn’t get it.

Northwestern Mutual had this policy in writing on its website, saying that job seekers and interns needed to have US citizenship, a green card, or a student visa. That means the company wouldn’t hire some refugees, asylum holders, and other workers, including DACA recipients, who have other types of work permits. Lawyers for Northwestern Mutual and other companies said that the policy had nothing to do with a job candidate’s citizenship status — that it’s not illegal to refuse to hire someone based on their type of work authorization.

Juarez argued that the hiring practices violated his equal rights under the Civil Rights Act of 1866. In his 2015 class-action complaint, his lawyers zeroed in on the equal rights clause, known as section 1981, which says “all persons within the jurisdiction of the United States shall have the same right in every State and Territory to make and enforce contracts … as is enjoyed by white citizens.”

The law was originally intended to ban discrimination against black Americans and Chinese immigrants, but courts have since also interpreted the “equal protection” clause to prohibit discrimination based on someone’s citizenship.

In Juarez’s case, lawyers for Northwestern Mutual said they weren’t discriminating against noncitizens because they hire immigrants with green cards.

“The policy alleged in the Complaint — essentially, ‘Legal aliens without green cards need not apply’ — on its face discriminates against a subclass of lawfully present aliens,” Forrest wrote, denying the company’s motion to dismiss the lawsuit. “The important point is that the alleged policy facially singles out a protected subclass for adverse treatment.”

Northwestern Mutual appealed the denial, and the Second Circuit Court agreed to review the judge’s dismissal order. Eventually, the company settled with Juarez. As part of the August 2015 settlement, the company agreed to create a recruitment program for DACA workers and other immigrants with legal status. They also agreed to pay up to $7,500 to workers they turned away as part of the policy.

The Juarez case was a victory for DACA workers and has paved the way for others to fight efforts to shut them out of the job market. The Los Angeles-based Mexican American Legal Defense and Educational Fund (MALDEF) has filed four similar class-action lawsuits against Merrill Lynch (owned by Bank of America), Procter & Gamble, and Allied Wealth Partners. This month, the nonprofit legal group plans to file a lawsuit against a Silicon Valley cloud computing firm called VMware, which told a DACA recipient in January that the company only hires US citizens and immigrants with green cards.

About 700,000 young immigrants have temporary legal status and work permits through DACA, and many of them have graduated from college since the program started in 2012. But as these complaints show, they still face barriers in launching their careers and joining the workforce.

It’s unclear how many DACA workers have been barred from jobs in the past six years. Thomas Saenz, president of MALDEF, suspects that it happens pretty often.

“These are among the five largest and most sophisticated companies in the country,” Saenz told me, referring to the defendants in the cases. “You would expect that if they are engaging in this conduct, then probably much smaller companies who don’t have access to high-powered lawyers must be doing the same.”

Saenz said his group is filing the lawsuits to let companies know that discriminating against DACA workers is illegal and they need to change their hiring policies.

In April, DACA workers snagged another small victory. A federal judge in Miami denied Procter & Gamble’s motion to dismiss a lawsuit filed by David Rodriguez, a 27-year-old graduate from Florida International University. That means the case has a decent chance to go to trial, or at the very least gives Rodriguez leverage in negotiating a settlement.

Rodriguez had submitted an application for a paid internship with the company after meeting with recruiters at a job fair on campus. When Rodriguez followed up about his application, the recruiter told him that he couldn’t work at the company because they only hire applicants who “are legally authorized to work with no restraints on the type, duration, or location of employment.”

Rodriguez filed a class-action lawsuit against the Procter & Gamble, arguing that the company was discriminating against him. Judge Kathleen Williams denied the company’s effort to dismiss the case, stating that Rodriguez had a plausible claim.

In a statement to Vox, a spokesperson for Procter & Gamble denied that recruiters discriminate against DACA recipients.

“At P&G, we don’t discriminate. Period. We fully embrace diversity and inclusion as do our employees who represent more than 140 different nationalities. In fact, we believe the diversity of our workforce is a competitive advantage. We strongly deny the allegations and look forward to defending them in court,” wrote Damon Jones, the company’s vice president for global communications.

Despite the uncertainty over the future of the DACA program, the development in these civil cases has made one thing quite clear: DACA recipients have the same rights as American citizens under the law.