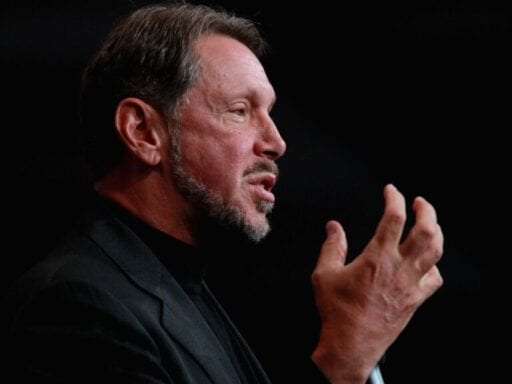 Oracle activists are calling the Thursday plan: “No Ethics / No Work.”

Oracle co-founder Larry Ellison’s decision to host a fundraiser for Donald Trump on Wednesday has awakened the usually passive workforce at his company, angering some employees who are going public with their disgust over Ellison’s actions.

On Thursday, some Oracle employees announced plans to stop working for a few hours in order to protest their boss’s fundraiser, Recode has learned, part of a push described as “No Ethics / No Work.” A group of activists at Oracle are calling on employees to spend their afternoons volunteering with community or advocacy groups, technically part of a “log off” since so many employees work remotely.

Having failed to pressure Ellison into canceling the event, these workers are now calling on Ellison and Oracle’s board to “host a fundraiser or commit funds to a humanitarian cause of their choice” and to issue a statement “denouncing the administration’s reckless, divisive political tactics, reaffirming our company’s commitment to diversity and inclusion, and committing to diversifying the Board of Directors.”

The Oracle employees’ reaction reflects how toxic Trump remains in Silicon Valley — and the ire that top tech executives can draw when they align themselves with the president. And it’s revealing that it’s happening at Oracle, which employees say has a conservative culture that has not been touched by the current bouts of workforce activism sweeping major tech companies.

“It signals what I and many others have always feared,” one current Oracle employee told Recode. “Culturally, Oracle is the type of place where you’ll work with many lovely people who you share common ideals with, but those ideals have to be left at the door in service of the company.”

Employees in touch with Recode in recent days have described bubbling frustration at Oracle. They said they were privately complaining to colleagues in their offices and sharing links about the fundraiser to friends on Facebook Messenger and slowly began to organize in a Slack channel over the holiday weekend. But while many say that their coworkers are also upset, assessing the full scale of their anger is difficult because of Oracle’s culture: It discourages employees from talking about politics. That’s also why it is unclear how substantial the plans to protest Ellison will become.

On Friday, employees began circulating a petition addressed to Ellison that now has almost 6,000 signatures, although non-Oracle employees can sign it as well. The petition calls on him to cancel the fundraising event. Oracle employees are also adding the link to the petition in their email signatures and are publicizing it in internal Oracle forums, trying to drum up pressure in a company not known for activism.

“Larry Ellison’s personal implicit endorsement and financial support of Donald Trump not only damages our brand perception and misrepresents the diverse views of our company, but it adversely affects the morale of the individuals and communities who comprise Oracle,” said the group behind the petition, called Oracle Employees for Ethics. “We are signing this petition because we want our voices heard and we refuse to be complacent and complicit in Larry Ellison’s support of such a divisive person.”

Oracle has repeatedly declined to comment on this new activism.

Ellison, the fifth-richest person in the US, surprised the tech industry last week when news broke that he would host Trump for a golf-filled fundraiser at his estate in California’s Coachella Valley. The event on Wednesday is, by far, the most significant public display of support for Trump 2020 by a tech titan.

Or as another Oracle employee, granted anonymity like others because they were candidly discussing their boss, told Recode: “Oracle is not supposed to be political but yet our CEO is doing something very political, no?”

“This fundraiser is a slap in the face to all of us, especially as Larry champions the environment and is building a hospital,” this employee said, referring to Ellison’s personal philanthropy. “This shows that he cares about money over all else. And that is what matters. But what is the average employee to do?”

The petition and the walkout are small but bold steps for employees at Oracle. Companies like Google are famous for fostering an open culture that leaves room for rabble-rousers and vigorous political debate during the workday. Other tech giants have proven much more outspoken about Trump policies like the ban on immigrants from Muslim countries and the debate over letting DREAMers stay in the United States.

But Oracle, from C-suite on down, is basically the anti-Google, some current and former employees say. Politics rarely comes up in the office. And there is very limited cross-team communication on internal forums about political matters; plus, employees are concerned that any posts critical of management would be monitored.

Compared to other tech companies, employees at the business-to-business software company say their colleagues skew older and more conservative (although Oracle’s workforce relies heavily on immigrants who have come to the US on H-1B visas, a program that Trump has cracked down on.)

That explains why despite some employees’ frustrations with Ellison, they have been slow to mobilize en masse.

Plus, some employees say they feel resigned because they believe that Ellison will do whatever he likes — regardless of his employees’ frustrations.

“Everyone I spoke to had the general attitude of, ‘It sucks but we can’t tell Larry anything,’” said one former employee, who recounted his conversation with five of his colleagues.

It is not as though Ellison’s support for Republicans is a total shock. Oracle has been one of the Silicon Valley giants that has worked hardest to cultivate ties to the Trump administration. Other tech giants have tried to keep at least some distance from the administration, but Oracle CEO Safra Catz has reportedly been under consideration to take senior roles within the White House, and she has hired several former senior Trump aides at Oracle.

Oracle’s ties to the administration led one executive in 2016 to resign from the company and blast it on the way out — but he was an exception to the rule.

And not all of Oracle’s workforce is upset over Ellison’s plans to fundraise for Trump. One current employee told Recode that he was proud of Ellison’s decision.

“I personally love that Ellison is willing to stand up for what he believes in even though it goes against the grain of what most people in the field and employees at his company believe politically,” this employee said.

But one of the ironies of Ellison’s public display of support for Trump is that he is not a dyed-in-the-wool Trump backer. Ellison was particularly close to Bill Clinton, once attending a ritzy dinner fundraiser in Silicon Valley for the Clinton campaign’s reelection race for about a dozen of Clinton’s top California donors. He once joked that the Constitution should have been amended to give Clinton a third term.

He was backing Democrats like Harry Reid as recently as 2013. In 2015, he hosted Barack Obama at the same golf course that Donald Trump will visit on Wednesday. Ellison didn’t even donate to Trump in 2016. (He was a major donor to a Super PAC backing Sen. Marco Rubio in the Republican presidential primary.)

That’s what makes Ellison’s decision perplexing to at least one person who was once close to him.

“He is a huge, huge liberal Democrat,” said this person. They described Ellison, a registered Democrat, as having been “so proud of the fact that he was one of the few [Fortune 100] CEOs who didn’t put greed before everything.”

“Larry looked down on Republicans of all stripes — especially the conservative evangelical ones,” the person said. “This Trump stuff makes no sense.”