Some sage advice for Donald Trump about picking a fight with Bob Woodward, from Donald Trump 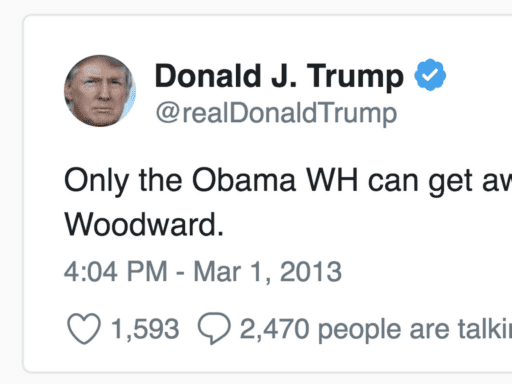 Legendary journalist Bob Woodward’s forthcoming book about the Trump White House portrays President Donald Trump as a petulant hothead. Trump’s response is to go on the attack against Woodward, as he did in an interview with the Daily Caller Monday:

“It’s just another bad book. He’s had a lot of credibility problems,” Trump declared, adding, “I probably would have preferred to speak to him, but maybe not. I think it probably wouldn’t have made a difference in the book. He wanted to write the book a certain way.”

“It’s just nasty stuff. I never spoke to him. Maybe I wasn’t given messages that he called. I probably would have spoken to him if he’d called, if he’d gotten through. For some reason I didn’t get messages on it.”

In doing so, Trump is (unsurprisingly) ignoring the counsel of everyone from reporter Jonathan Swan of Axios to former George W. Bush press secretary Ari Fleischer, who have warned that it won’t be as easy to blow off Bob Woodward as it was to blow off unflattering portrayals in books from Michael Wolff and Omarosa Manigault.

But perhaps the president might listen to a man he once named as his No. 1 adviser: Donald J. Trump.

Only the Obama WH can get away with attacking Bob Woodward.

For the record, the “attack” Trump referenced in his 2013 tweet didn’t come from Obama himself. The “attack” was a shouting match between Woodward and Gene Sperling, who at the time headed Obama’s Council of Economic Advisers, after Woodward wrote a piece blaming Obama for a failure to compromise on the federal budget. (In the absence of a deal between Obama and congressional Republicans, automatic and painful budget cuts went into effect via the sequester.)

Sperling then emailed Woodward and predicted he “will regret staking out that claim” — a quote that conservative commentators portrayed as a threat (even though Sperling said it in the context of apologizing to Woodward for raising his voice).

Is Trump’s recent statement more of an “attack” on Woodward than when Trump personally told Woodward by phone (months before the book came out) that his book was inaccurate because it didn’t portray him as the best president ever, then accused Woodward of having had “a lot of credibility problems”? That’s a matter for 2018 Donald Trump and 2013 Donald Trump to hash out.

As much fun as the find-the-old-Trump-tweet game is, though, Trump probably will get away with attacking Bob Woodward. He’s gotten away with attacking pretty much every other publication and journalist who’s gotten enough insight and access into the Trump White House to reveal what an absolute shambles the day-to-day management of it is, and how impetuous and capricious the president can be.

As appealing as it might be to believe that Woodward’s Watergate record will give him more credibility with voters than everything else we know about how Trump makes decisions, the publication of Woodward’s book — in the absence of action from Republicans in Congress (or, theoretically, within the Cabinet) — won’t automatically make Donald Trump any less of a president of the United States.

One of Peter Thiel’s closest aides might run for the US Senate
E3, the biggest video game event of the year, is canceled because of coronavirus
Why the very richest Americans are refusing to take sides in the presidential race
The shift to online learning could worsen educational inequality
The FDA just gave the green light to a new kit that allows you to swab for coronavirus at home
Why it’s damaging to blame celebrity “meltdowns” on mental illness