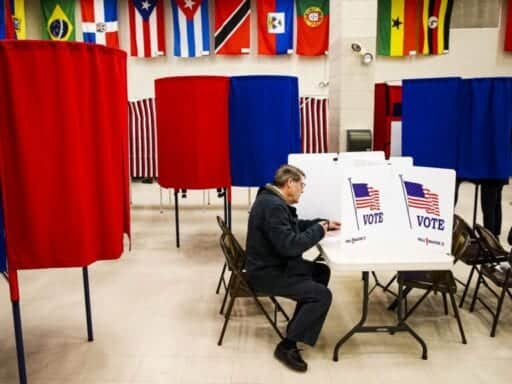 But does cross-party voting work? Sort of.

Karen Martin is an organizer for a local Tea Party group in Spartanburg, South Carolina, and a registered Republican. On February 29, she’ll cast a vote for Sen. Bernie Sanders in the South Carolina Democratic primary.

Some Republicans, including the president’s son, have been boosting Sanders, perhaps to encourage division within the Democratic Party. But Martin told me that her vote is about proving a different point.

She and other members of the Tea Party movement in South Carolina want to end the state’s open primary system, which they believe leads to excessively moderate candidates breaking through. “We’re not necessarily looking to disrupt any additional things. And we really don’t care who comes out of South Carolina on top,” she said.

Crossover voting — when voters from one party vote in the other’s primary to lift a specific candidate — isn’t new. With open primaries in more than 20 states, crossover voting has been a part of primary politics for years. In fact, it was in South Carolina (and Michigan) two decades ago that hundreds of Democrats switched affiliations to vote for then-presidential candidate John McCain, an effort the Bush campaign then used against McCain.

Back in 2000, a Bush campaign spokesperson denounced the purported “alliance between the limousine-liberal Democrats and the McCain campaign” as “distorting the intent of real Republican voters.’’

Since Republicans have canceled their primary in South Carolina this year, she said voting in the Democratic primary is the best place to make her point — and make the Democratic Party’s efforts to find a candidate more hectic.

A brief history of crossover voting

More than 20 states permit voters affiliated with any political party (or none at all) to vote for candidates in open primaries. Republicans can vote in Democratic primaries, and vice versa.

But as Jeff Stein detailed for Vox in 2016, members of both the Democratic and Republican parties have long railed against open primaries for the exact reason Martin cited during our conversation. Opponents argue that they can weaken the influence of loyal party members and move the party in the wrong direction.

Loyal party members can resent the idea of someone with no allegiance to the party selecting its most important nominee, Richard Berg-Andersson says.

”The attitude is: We’re the ones working hard, licking the envelopes, handing out the brochures,” Berg-Andersson says. “And we don’t like the notion that someone who shows up every four years to vote and isn’t really committed to the party gets to help choose its nominee.”

As the New York Times wrote in February 2000:

That does not mean, however, that voters who vote in the Republican primary will remain loyal in November. Many Democrats and independents, including Mr. Tenenbaum, say they are not sure they will support Mr. McCain over the Democratic nominee in the general election. In Massachusetts, where state officials have been flooded with calls from voters wanting to change their party affiliation or register as a Republican for the first time, many voters have made it clear they plan to switch back immediately afterward.

William F. Galvin, the secretary of the commonwealth of Massachusetts, called it ‘’the dance of the seven veils,’’ and said he would be distributing extra party registration cards for the March 7 primary for people wanting to switch back.

In 2008, some Republicans attempted to meddle back. Led by radio talk show host Rush Limbaugh, “Operation Chaos” was a campaign to get Republicans to vote for Hillary Clinton over Barack Obama in states with open primaries as part of an effort to “bloody up Obama politically,” keep Clinton in the race, and make Obama easier to defeat in November.

According to Limbaugh and some members of Obama’s team, it worked. As reported by the Washington Post in spring 2008, then-Sen. John Kerry told journalists on a campaign call, “Rush Limbaugh was tampering with the primary, and the GOP has clearly declared that it wants Hillary Clinton as the candidate.”

Those looking for evidence of Limbaugh’s influence pointed to Clinton’s edge among Republicans in Indiana and North Carolina. In Indiana, 10 percent of Democratic primary voters described themselves as Republicans, a higher rate than in any state but Mississippi, and they went for Clinton by eight percentage points, according to exit polls. In North Carolina, they were 5 percent of the electorate, and went for her by 29 points.

By contrast, Obama won Republican voters, often by very large margins, in seven of the eight states where exit polls were able to report the group before the Texas and Ohio primaries on March 4, when Limbaugh first coaxed listeners to vote for Clinton.

Limbaugh called off the effort in May 2008, saying that he wanted Clinton to stay in the race to protract the Democratic nomination fight but that Obama would be easy for Republicans to beat.

“Barack Obama has shown he cannot get the votes Democrats need to win — blue-collar, working-class people,” he said. “(Obama) can get effete snobs, he can get wealthy academics, he can get the young, and he can get the black vote, but Democrats do not win with that.”

Of course, Obama won in November 2008. And so did Donald Trump in 2016, in an election that saw efforts by some Democrats to cross over in open primary states to vote for Trump in the belief that he would be easy to beat.

“If there is such evidence, I haven’t seen this”

Yanna Krupnikov, an associate political science professor at Stony Brook University, told me that even beginning to understand the impact of crossover voting strategies like “Operation Chaos” or the South Carolina GOP’s votes for Bernie Sanders is challenging.

“For example, we’d first have to assume that partisans would truthfully explain their strategies,” she said. “Second, we’d have to assume a counterfactual of what would have happened if there wasn’t any effort by the other party to push a certain candidate.” She added she hadn’t seen much proof that crossover voting strategies were effective. “If there is such evidence, I haven’t seen this.”

Kelly Rader, an associate political science professor at Yale University, agreed, telling me that while crossover voting is common in open primaries, “there’s little empirical evidence that crossover voters are trying to sabotage the party in the general election.” Rather, she said, “They seem to be voting for their sincerely preferred candidates.” Of the South Carolina GOP’s push for Sanders, she said, “It seems more like a political stunt to draw attention to the drawbacks of open primaries.”

But Krupnikov made an important point: such a strategy, if it were to prove effective, could backfire massively. Rush Limbaugh almost certainly did not want an Obama presidency, for example, and Democrats decidedly did not want Trump to win the White House. Pushing a “more extreme” candidate, Krupnikov said, puts one’s own voting preferences on the line.

“If your candidate falters — and he or she might because nothing is certain — you are going to end up with a president who is very far removed from your own positions. In other words, if this strategy backfires you could actually end up with an even worse outcome than if you’d just left the other party alone.”

“I don’t see that happening”

Martin told me she and other South Carolina Republicans had chosen to support Sanders because Biden still held a significant lead in the state. “I’m not sure if we could move him with enough crossover votes to overcome Biden,” she said, “but that’s the math we’re looking at is who can we cross over and vote for that mathematically will cause the most consternation.”

Ultimately, she hopes that the crossover vote push will cause South Carolina Democrats “the same kind of angst that we’ve had for years” and push them toward closing their primary.

“I do not think it was a result of our efforts, even if we were as successful mathematically as we could be, that everyone’s going to agree to close the primaries tomorrow,” she told me, but said coverage of their efforts was already getting traction with Democrats in the fight for closed primaries.

I asked whether Martin was concerned that a Sanders primary victory in South Carolina pushed by Republican crossover voters could ultimately result in a Sanders presidency. She took my point, but said, “I don’t see that happening.”

She said the Iowa caucuses showed that “the people that make the rules in the Democrat party are not going to allow Bernie to be the nominee.” Citing debate rule changes and recent remarks by Democratic Party stalwarts like James Carville, she said that there was no way the party would permit Sanders to win the nomination.

“The rule makers in the Democrat party are not going to let him be the nominee, so that is not a concern for us.”