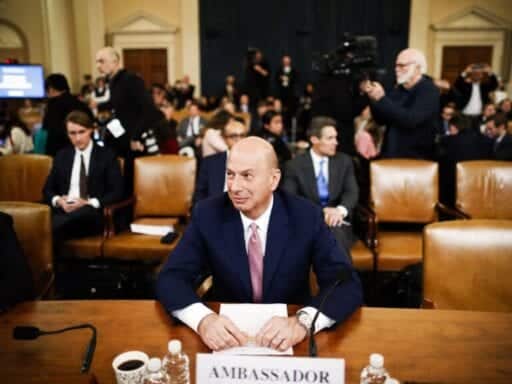 Share
Loading...
US Ambassador to the European Union Gordon Sondland arrives to testify before the House Intelligence Committee, on Nov. 20, 2019. | Andrew Harnik/AP

Sondland’s testimony was devastating for the secretary of state.

Secretary of State Mike Pompeo was more centrally involved in the Ukraine scheme than previously appeared to be the case — the plan to pressure Ukraine to investigate Joe Biden, his son Hunter, and Democrats made its way to the very top of the Trump administration’s foreign policy team.

That stunning revelation came during Wednesday’s impeachment hearing in the opening testimony of Gordon Sondland, the US ambassador to the European Union. It was known that Pompeo was aware of the plan — for example, he was on the July 25 call between President Donald Trump and Ukrainian President Volodymyr Zelensky — but the extent of his knowledge of the quid pro quo is new and damning.

Sondland outlined three specific instances in which Pompeo was made aware of the Ukraine scheme, and one where he directed US diplomats to engage with Trump’s personal lawyer Rudy Giuliani. In other words, Pompeo wasn’t just an innocent bystander, blissfully unaware of what was going on — he was actively involved.

All this time there has been talk of two policies toward Ukraine: a traditional one led by US officials and an “irregular” one led by Giuliani. But after Sondland’s testimony, it’s pretty clear Pompeo played a role in both.

Pompeo was aware of the Ukraine quid pro quo

“Was there a ‘quid pro quo?’” Sondland rhetorically asked the House Intelligence Committee. “The answer is yes,” adding later, “Everyone was in the loop.”

Pompeo is clearly included in “everyone” based on the four specific instances the ambassador detailed in his opening testimony.

The first example is a July 19 email received by the secretary of state and other top officials, including acting White House Chief of Staff Mick Mulvaney.

“I Talked to Zelensky just now … He is prepared to receive Potus’ call. Will assure him that he intends to run a fully transparent investigation and will ‘turn over every stone,’” Sondland wrote. “He would greatly appreciate a call prior to Sunday so that he can put out some media about a ‘friendly and productive call’ (no details) prior to Ukraine election on Sunday.”

In other words, Sondland informed Ukraine’s president that he needed to commit to investigate the Bidens and Democrats during a future call with Trump. If Zelensky had complied, the quid pro quo plan would’ve nearly been complete — and Pompeo was aware.

With the subject line “Ukraine,” Sondland wrote: “Mike – [former special Ukraine envoy] Kurt [Volker] and I negotiated a statement from Ze[lensky] to be delivered for our review in a day or two. The contents will hopefully make the boss happy enough to authorize an invitation. Ze plans to have a big presser on the openness subject (including specifics) next week.”

“Gordon, I’ll pass to S,” Kenna replied, using the State Department’s abbreviation for the secretary of state. “Thank you.”

That’s big. As secretary of state, Pompeo surely knew how important it was for Zelensky to have a meeting with Trump to show America has Ukraine’s back as it fights off Russia’s invasion. Yet Sondland’s email made it clear that such a meeting was conditioned on Kyiv agreeing to open investigations into the Bidens and Democrats. It’s unclear, though, how Pompeo responded.

Third, Sondland detailed an August 22 email that he sent directly to Pompeo and copied Kenna about planning for a Trump-Zelensky meeting in Warsaw.

“Should we block time in Warsaw for a short pull-aside for Potus to meet Zelensky? I would ask Zelensky to look him in the eye and tell him that once Ukraine’s new justice folks are in place ([in] mid-Sept[ember), that Ze[lensky] should be able to move forward publicly and with confidence on those issues of importance to Potus and to the US,” Sondland wrote. “Hopefully, that will break the logjam.”

Sondland was worried that nearly $400 million in military aid for Ukraine was purposefully held up, but he didn’t know why. His hope was that a brief Trump-Zelensky chat might lead the president to release the funds, and it seemed that Pompeo agreed. Trump, however, didn’t go to Warsaw and sent Vice President Mike Pence in his stead.

Finally, Sondland noted that “[e]ven as late as September 24, Secretary Pompeo was directing Kurt Volker to speak with Rudy Giuliani. In a WhatsApp message, Kurt Volker told me in part: ‘Spoke w Rudy per guidance from S.’” Remember that “S” is the State Department’s single-letter abbreviation for the secretary of state.

This means that Pompeo knew how central Giuliani was to the scheme, and encouraged Sondland — and perhaps others — to coordinate with the president’s personal lawyer on Ukraine policy.

Put together, there’s just no way Pompeo can feign ignorance when it comes to the administration’s true intention toward Ukraine. He was not only made aware if it, but in at least one instance, directed a specific action — outreach to Giuliani.

This is all potentially damaging for his future political aspirations and it may further embroil Pompeo in a crisis he’s tried hard to avoid. At this point it wouldn’t be surprising — or unwarranted — for House Democrats to ask Pompeo to testify based on Sondland’s testimony.

The Good Place gets weirder than usual when “Chidi Sees the Time-Knife”
Less than 1,000 mountain gorillas remain in the wild. What happens if they get Covid-19?
Fox News is using the coronavirus as just another cudgel to attack the libs
Images of police using violence against peaceful protesters are going viral
Will the government shutdown again before the midterms? Ask Trump.
Trump gifted Kim Jong Un an Elton John CD with the song Rocket Man