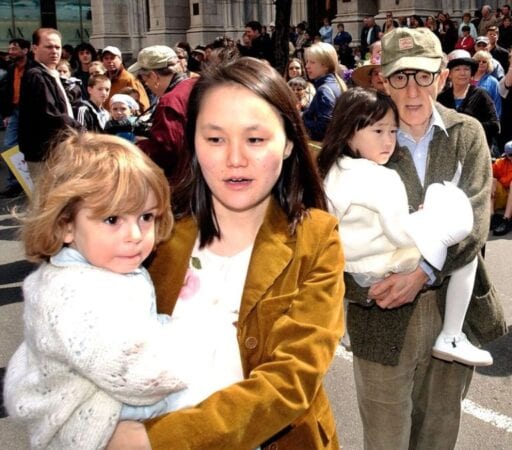 Share
Loading...
In January 1992, Mia Farrow discovered explicit nude photographs of her adoptive daughter, Soon-Yi Previn, taken by Farrow’s then-long-term partner, Woody Allen. At the time, Soon-Yi was a college student in her early 20s; Allen was in his 50s. (Previn’s adoptive father was Farrow’s second husband, Andre Previn, whom Farrow had divorced in 1979.)

Allen and Farrow’s acrimonious breakup followed later that year, and was complicated by their adopted daughter Dylan Farrow, who was 7 years old at the time, accusing Allen of molesting her. Both then and in the intervening decades, some were suspicious of Dylan’s accusations, saying that Mia Farrow had planted them and coached Dylan in order to get back at Allen for having an Affair with Previn. Farrow eventually gained custody of the couple’s children.

A sticky web of accusations, lawsuits, investigations, public statements, and media coverage has persisted ever since.

In August 1992, Previn excoriated her mother in a statement issued by Allen’s publicist that was published in Newsweek. In the statement, she accused her mother of being “violent with me” and declared that “the business of him molesting Dylan is so ridiculous that I won’t dignify it with a comment.” Dylan Farrow, for her part, has maintained her story into adulthood, most recently reentering the public eye with the advent of the #MeToo movement.

In 1997, Previn and Allen got married; they have now been together for more than 25 years and have adopted two daughters of their own. But Previn has mostly stayed out of the public eye, while Allen has continued making about one movie per year, as well as writing books and humor pieces.

Now, after several decades of silence, Previn, who is currently 47, has given multiple interviews to journalist Daphne Merkin in which she speaks about her relationships with her mother, with Allen, with her siblings, and with the public eye.

Merkin discloses in the resulting profile of Previn — published in the September 17 issue of New York magazine — that she’s been a friend of Allen’s for 40 years. Merkin also notes that she conducted her interviews with Previn in Allen’s and Previn’s home, often with Allen present.

Merkin portrays Allen and Previn as an affectionate, happy couple with a private home life. Previn is “articulate and self-aware,” she writes, while Allen is described as always having had a “lack of a discernible ego” and an “unwillingness, or perhaps inability, to contest his ongoing vilification.” (“I am a pariah,” he tells Merkin.)

The profile has proved immediately controversial. However, the cause is not so much its content, which largely sees Previn repeating — albeit in much more detail — accusations that have been broadly made in the past. Rather, it’s Merkin’s authorship of the story, given her long friendship with Allen, that has been the biggest target of criticism from media observers and from Farrow’s family.

Soon-Yi Previn’s interview goes into more detail about her life, without any new revelations

The New York magazine piece doesn’t contain any bombshells. Its characterization of Allen, Previn, Mia Farrow, and the entire situation is roughly in keeping with what Allen’s allies have said over the past three decades. But in it, Previn expands on some accusations that she and others have made against Farrow in the past — especially the characterization of Farrow as motivated by revenge against Allen and Previn for the affair.

In the interview, as she did in 1992, Previn accuses her mother of abuse, this time in more specific terms. She says Farrow was accustomed to “arbitrarily showing her power” by slapping her daughter, spanking her with a hairbrush, calling her “stupid” and “moronic,” and even throwing things at her. At one point, Previn says, Farrow held her upside down so the blood rushing to her head “would make me smarter or something.”

Previn also describes the beginning of her and Allen’s relationship, saying that neither of them thought it would last long, but that it did largely because of the way they grew close during the aftermath of Farrow and Allen’s breakup.

That aftermath involves a battle between Farrow and Allen for custody of Dylan Farrow, as well as her brothers Moses and Satchel. (Satchel is Allen and Farrow’s biological son; Moses and Dylan were both adopted, and Moses has now sided with his father for years regarding Dylan’s account of molestation, most recently defending him in a BlogSpot post on May 23.)

Satchel began going by his middle name, Ronan, after his parents split. Now a journalist and regular contributor to the New Yorker, Ronan Farrow has become a driving force of the #MeToo movement over the past year. In April, he was awarded the Pulitzer Prize, along with the New York Times’s Jodi Kantor and Megan Twohey, for reporting on the Harvey Weinstein allegations that set the current movement in motion. He has since continued to report on allegations of sexual harassment and abuse committed by powerful men, including former New York Attorney General Eric Schneiderman and CBS chair and CEO Les Moonves.

While Previn’s interview adds some new details to her previous claims, including more specific allegations of abuse, it doesn’t make any new claims. Previn talks to Merkin about the beginning of her relationship with Allen; after watching Ingmar Bergman’s The Seventh Seal with Allen on break from college, “we chatted about it, and I must have been impressive because he kissed me and I think that started it.”

She says she “felt valued” by Allen, which was “quite flattering for me” — “He’s usually a meek person, and he took a big leap.” Previn frequently casts her mother’s actions as self-serving attempts to get Previn on her side, rather than Allen’s.

And Previn and Allen both discuss whether she’s been shaped by her marriage to Allen. She says he gave her a world she wouldn’t have otherwise had access to. Allen chimes in, downplaying his role and describing Previn as having a “large” personality. “I provided her with material access and opportunity, but it’s all her,” he says. “I’m more introverted and nondescript.”

Later, as I walk home, I find myself wondering whether Soon-Yi’s voice — having finally been heard — will be listened to, much less change anyone’s opinion. It’s a gamble she’s taken by speaking out, but then again, she’s never been one to play it safe.

Allen’s coupling with the #MeToo movement seems to be at least part of the motivation for Previn coming forward now after refraining from public comment for so long. “What’s happened to Woody is so upsetting, so unjust,” Previn says to Merkin. “[Mia Farrow] has taken advantage of the #MeToo movement and paraded Dylan as a victim. And a whole new generation is hearing about it when they shouldn’t.”

(It’s also worth noting that Merkin has been critical of the #MeToo movement in the past, including in a New York Times op-ed published in January.)

Over the past year, a number of prominent actors, including Michael Caine, Timothée Chalamet, Rachel Brosnahan, Greta Gerwig, Colin Firth, Peter Sarsgaard, and Evan Rachel Wood, have publicly denounced their work with Allen or said they wouldn’t work with him again in the future.

And at the end of August, Amazon — which previously produced two of Allen’s feature films and has a distribution deal with Allen — said it has no planned release date for Allen’s most recently completed film, A Rainy Day in New York, which was shot last summer.

Merkin’s piece has been met with skepticism, not so much for its content — it doesn’t reveal much that’s unexpected — as for the fact that it was written by a longtime friend and self-confessed fan of Allen’s. Many people have bluntly questioned its journalistic value, given Merkin’s relationship with Allen and what some have called a bias in favor of his version of the facts.

In response to the story, Dylan Farrow tweeted a statement from seven of her siblings, rejecting attempts to “vilify” their mother and calling her “a caring and giving parent”:

I’m grateful to my siblings for standing by me and my mother. Statement from Matthew Previn, Sascha Previn, Fletcher Previn, Daisy Previn, Ronan Farrow, Isaiah Farrow, and Quincy Farrow: pic.twitter.com/aBjWFUJjdH

Dylan also tweeted her own statement, criticizing New York magazine for allowing Merkin to write the piece and disputing its veracity:

And Ronan Farrow released a statement that specifically criticized New York magazine’s “hit job,” including the magazine’s “lack of care for the facts”:

Statement on New York magazine, which has done something shameful here: pic.twitter.com/xGeQP341OG

Criticism has also come from people outside of Farrow’s family:

This is the same argument Weinstein’s people made to NBC about @RonanFarrow investigating Harvey? They said he had a conflict of interest because of his estranged dad. I said Daphne shouldn’t have profiled her friend given her obvious bias & that this is a sensitive matter https://t.co/mK98WNVNdu

I don’t understand the journalistic value of having someone with an obvious conflict of interest defend an accused child molester with no response from the accuser–in a piece written by someone who admits to being friends with the accused, no less. https://t.co/hZf6YbrF0U

.@NYMag seems to think it isn’t a problem the writer they hired to profile Soon-Yi Previn, Woody Allen’s wife of 20+ years, is a devoted friend and admirer of Allen.

At this sentence, I stopped reading. I won’t link to the piece, because it isn’t journalism. NYMag knows better. pic.twitter.com/f7co7ZmwOT

On Sunday, New York magazine spokesperson Lauren Starke defended the decision to publish the story, saying that it puts forward Previn’s point of view and is “transparent” about Merkin’s and Allen’s long relationship. “I would add that Daphne approached Soon-Yi about doing this piece, not vice-versa,” Starke said. “We reached out to both Mia and Dylan Farrow for comment; Dylan chose to speak through her representative.”

“We hope people will read it for themselves,” Starke said.

It’s worth noting that Maureen Orth, who has written about Mia Farrow’s side of the story several times for Vanity Fair, also came under similar criticism from some who said she was a “personal friend” of Mia Farrow’s who helped Farrow place a piece to help launch Ronan Farrow’s media career. In contrast to Merkin, however, Orth denied having such a relationship with Mia Farrow in 2014.

It’s likely that Merkin’s long-term relationship with Allen is the key that unlocked the interview with Previn in the first place; Allen’s publicity team has been famously rigorous about his public image for decades.

Still, though it’s difficult to imagine any journalist maintaining perfect objectivity when it comes to the much-publicized, decades-long story of Woody Allen, Soon-Yi Previn, Mia Farrow, and Dylan Farrow, Merkin’s personal relationship with Allen may have ensured that Previn’s interview is just one more strand in the increasingly messy tangle of this story.

Why so many people have started journaling during the pandemic
The Democratic primary has a legitimacy problem
The controversy over 2 Trump allies getting tested for coronavirus, explained
The serious message behind Kim Jong Un’s silly horse photos
“He’s black me!”: Alec Baldwin returns to SNL to spoof Trump’s Kanye West meeting
Why measles is back in the US