Sorry, you can’t wear a Biden shirt or MAGA hat when you vote 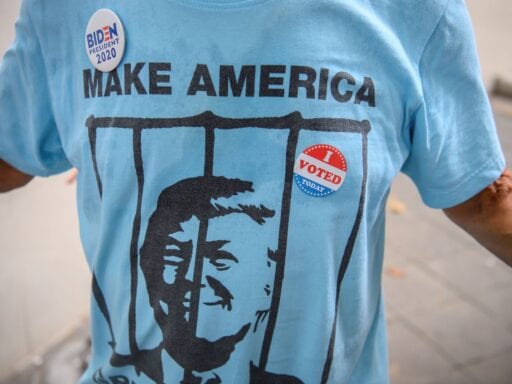 Share
Loading...
Don’t wear any merchandise that features a candidate’s name or political slogan to the polls. | Mladen Antonov/AFP/Getty Images

With Election Day approaching, voters are heading to the polls in record numbers in states where in-person early voting has begun. Millions have already cast their mail-in ballots, and experts are surmising that if voter energy holds steady through November 3, this election cycle could have the highest turnout rate since 1908.

To cast a ballot before or on Election Day, citizens generally need to be registered to vote in their state ahead of time, although 21 states and the District of Columbia have enacted laws that allow for same-day registration. Elections in the US are overseen by local governments and operate under a decentralized system, while adhering to various local, state, and federal laws.

Since Election Day isn’t a federal holiday, employees aren’t federally mandated to have time off from work to vote, although each state has established its own set of laws. According to Ballotpedia, 28 states for the 2020 election cycle are requiring employers to give employees some time off to vote. In the remaining 22 states — most of which don’t offer universal vote-by-mail — there are no laws mandating this.

This highlights how election-related rules aren’t always consistent from one state to the next, and can be highly confusing for people unfamiliar with the ins and outs of the voting process. Here are some things to keep in mind as you head to the polls.

Leave all apparel and accessories that feature a candidate’s name, slogan, or any ballot issue at home. Most states have laws that prohibit “electioneering,” or engaging in activities that support a political candidate or party near polling places. Thus, wearing a political shirt is interpreted as a political act, and could prevent you from casting your ballot that day.

According to the National Conference of State Legislatures, most states have restrictions on whether people can display signs, hand out campaign literature, or solicit votes within a specific distance of a voting station. In Michigan, it’s against the law to wear anything that “directly or indirectly makes reference to an election, a candidate, or a ballot question.” Some states have similar likeness clauses when it comes to a candidate or their logo.

The Washington Post reported that some voters in Georgia and Tennessee have been challenged by poll workers for wearing Black Lives Matter apparel to vote early. One Georgia voter who was challenged acknowledged that some people could view the Black Lives Matter slogan and movement as political, which he disagreed with. “People’s lives are not political,” he told the Post. And while poll workers are expected to be nonpartisan, there could be inconsistencies as to what counts as “political” among these volunteers, who only receive brief training.

Since Black Lives Matter does not reflect a specific party or candidate, apparel in support of the slogan or movement is permissible, according to a county election commissioner in Tennessee. However, T-shirts showcasing the Biden-Harris logo or “Make America Great Again” would be considered political, so leave those at home.

You should probably save the photos for later

Some states have enacted laws against taking photos inside or within a certain distance of a polling place, which means in-line selfies or images of a voter’s marked ballot aren’t allowed. These laws aren’t often enforced, although you can technically be fined, given jail time, or have your vote disqualified for violating these rules. It is entirely legal, though, to snap photos of an “I Voted” sticker or a sealed ballot, so long as you’re not inside a polling precinct or voting booth.

In Georgia and Illinois, for example, photography isn’t allowed at voting centers, and some have bans on cameras or electronic recording devices. Other states are more lax on cellphone and camera use, like Arkansas, so long as a person isn’t snapping photos of marked ballots or being generally disruptive. If you’re curious about your state’s “ballot selfie” law, CNN published a handy in-depth guide on the nuances of each state.

If the long lines at some early voting precincts are any indication of what Election Day will be like, be sure to keep these considerations in mind so that you’ll be able to cast your vote as smoothly as possible. Voting in America, even in the most progressive states, can be a long and arduous process. Don’t let a T-shirt or a random photo prevent you from exercising that right.