Spider-Man: Far From Home starts slow. Then it swings for the stars. 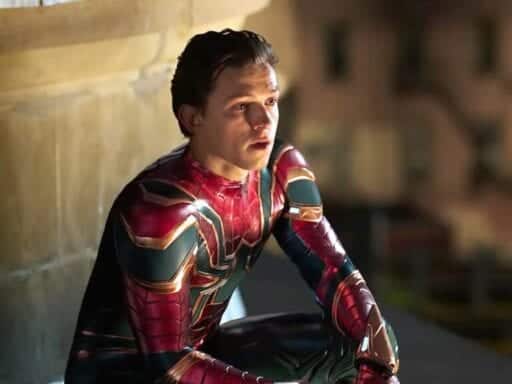 Spider-Man’s latest outing is more effective as a rom-com than the emotional drama it tries to be.

In Spider-Man: Far From Home’s most poignant moment, Peter Parker (Tom Holland), in his Spidey suit, crumbles at the tombstone of one Anthony Edward “Tony” Stark. Peter doesn’t even need to say a word, nor do we even need to see his face, to feel the full shock of his grief. As Marvel fans, we know it well — we feel it too.

In Avengers: Endgame, Tony, a.k.a. Iron Man, the brainy billionaire leader of the Avengers, gave up his life — including his dream-come-true with a family and daughter he never thought he’d be able to have — for the disintegrated half of Earth’s population (including Peter, his teenage superhero protégé) to survive.

The image of Peter breaking down at Tony’s tombstone also underscores that Tony’s sacrifice did not offer a clean-cut, happy ending. Instead, it has left Peter with an unintentional burden: He lives every second of his life in fear that Tony Stark’s sacrifice was in vain, that he doesn’t deserve Iron Man’s bequeathals, let alone a spot with the Avengers at all.

In this moment, it’s clear how much Tony means to Peter — that Tony has become this latest Spider-Man saga’s Uncle Ben. It was Ben after all, not the radioactive spider, that was the driving force and guiding light that turned comic book Peter Parker into Spider-Man and who taught Peter to never forget the responsibility to his power. Tony functions in the same way, his death ultimately affecting and guiding Marvel Cinematic Universe Peter.

But the emotional and narrative poignancy of striking images like these hardly lasts.

Instead, Far From Home director Jon Watts gives into a frustrating habit of introducing promising starts of ideas, only to let them fizzle out when it comes to the followthrough. Far From Home ventures into rich emotional territory with gestures toward how humans skirt responsibility when they experience loss, and how aggravating it must be for superheroes to have super-strength and near-physical invulnerability, but still not be able to mend their emotional damage.

Then the movie just lets those moments fade.

So while we’re meant to understand that Tony is Uncle Ben, we never really are made to examine the depths of that relationship. Instead, the movie lingers upon the surface of this emotional core, leaving us to interrogate Peter’s sadness and fear of disappointing his hero on our own. What’s the single worst thing that Peter could do that would disappoint Tony? Or what is it specifically about Tony’s death that’s shaken Peter so hard? While it paves the way for us to ask these questions, Far From Home doesn’t really offer up any answers, more or less relying on the other MCU movies, your Marvel knowledge, and some stunning visuals to do the heavy lifting.

All the false starts and dead ends make Far From Home feel uneven, despite spirited performances all the way around, especially from Holland and Zendaya. It’s not until the movie’s halfway over that it finds its own independent rhythm, finally making meaningful storytelling decisions instead of alluding to them, and snapping back to life in the process. It’s just a shame, then, that we have to wait for the next Spider-Man flick to fully see what Far From Home should’ve, could’ve, would’ve been.

Spider-Man: Far From Home is great — once it gets out of its own way

As the 23rd Marvel movie, and first to arrive after the game-changing Avengers: Endgame, Far From Home is difficult to understand without any prior knowledge of the films before it.

Endgame saw Tony Stark and the Avengers not only defeat Thanos, but also restore the half of life in the universe that Thanos had decimated with a snap of his fingers in the preceding film, Infinity War. Reversing all that damage doesn’t come for free. Prices were paid: Black Widow gave up her life for the Soul Stone and Tony Stark did the same in reversing Thanos’s snap.

This movie picks up right after Stark’s sacrifice, but through the eyes of know-it-all teens. Instead of calling the event the “snap,” it’s known as “the blip,” and for Parker and his ilk, the biggest consequence is that everyone who survived the snap is now five years older. Those who were snapped away stayed the same age, and that, you can imagine, makes high school even more awkward.

Thankfully for everyone, it’s the end of the school year, and Peter and his friends are headed for a school trip to Europe that will hopefully distract them — and us — from the discomfort of their new reality.

Why parents, some of whom lost their kids for five years and just now got them back, would then let their kids go off to Europe is beyond me. But Peter wants a vacation and to be a normal kid who goes on vacation with his best friends and high school crush to Venice, Paris, London and everywhere in between. After all he went through between Infinity War and Endgame — and losing his mentor, Mr. Stark — he just wants a break.

Reprising his role as Peter Parker, Holland is as buoyantly awkward and winsomely clumsy as ever. His Parker has no grace, continually failing to impress the delightfully downbeat MJ (Zendaya), the one person he cares about as much as he does Tony Stark. MJ just wants to talk about murders and death and conspiracy theories, while Peter’s stuck with his head in the clouds, rehearsing grand gestures over and over in his mind to finally win over his mordant grumpy dream (nightmare?) girl.

Zendaya and Holland are absolutely charming together, squeezing so much squee out from the little flickers of looks they shoot to one another, and how when their faces soften, seemingly in unison, it makes all the words they’re saying to one another just fall apart.

The problem for Peter and MJ is that there’s a new threat on Avengers-less Earth: something called the Elementals, powerful beings that a new, alternate universe hero seems only able to thwart. But that hero, nicknamed Mysterio, (Jake Gyllenhaal) sure doesn’t seem like he should be trusted as much as Peter Parker wants to. (For starters, his code name is Mysterio.)

Gyllenhaal, like Marvel’s bevy of A-List actors turned villains (see: Blanchett, Cate; Keaton, Michael; Russell, Kurt; et.al.) is a treat — giving Mysterio just a smidge too much wholesomeness, a little too much glimmer in the eyes, to hint at his true nature. He plays a perfectly convincing front of a good guy, and we can understand why a Tony-less Peter is so drawn to him.

But the movie’s true villain is the writing connecting all these moving parts.

As with all superhero movies, there’s an understanding with the audience that heroes need time to learn what it means to wield that responsibility. Viewers are asked to suspend their disbelief a tiny bit, to buy into the idea that a hero that helped save the world a movie ago really just wants to go on vacation or is really having a rough go of it in the self-confidence department.

But it’s borderline insulting to be asked to maintain that suspension with the shoddy dialogue and structure in the first third of Far From Home. The entire first act feels like writers doing the bare minimum to set themselves up for the reveal that — oh my gosh! — Mysterio isn’t to be trusted, and Peter may have to do some “hero stuff” after all.

We see this development from thousands of miles away, but Far From Home makes us sit through a slow, slow trip across European locales before it allows anything to really move forward.

Once that shift does happen, it’s as if a completely different set of writers tagged themselves in, loosening up the flatness of the movie into something goofier, zippier, funnier. Zendaya and Holland shine in scenes that channel the very best teenage romantic comedies. And the flip in the script also allows Gyllenhaal to tap into something much more sinister.

The next two acts are flanked by genuine tension, best drawn out in absolutely gorgeous fight scenes. The action sequences, like Spidey himself, defy gravity and physics. During one twisty scene, the floor seemingly dissolves underneath Spidey, plunging him down into the abyss, only to slingshot his Gumby body back into the atmosphere. The visuals in Far From Home are a surreal pleasure and at times, purposely, sublime nightmares.

Throw in the earnest sweetness of Peter and MJ’s growing friendship, and Far From Home leaves us on as strong of a high as the low that its first act takes us to. That warm and fuzzy feeling makes it impossible not to think of how great a movie Far From Home could’ve been had it not tripped over its own feet in setting the stage, or unspooled itself from that tangled-up beginning. Because when the movie is at its best, it is so effortlessly engaging. It’s such a shame, then, that so much of the movie feels like (home)work.

Why Covid-19 is worse than the flu, in one chart
Tech billionaires give away billions — but it’s just a small fraction of their staggering wealth
ICE agents pressured parents to be deported with their children — then separated them again when the...
The multibillion-dollar business of sheltering migrant children, explained
During the worst summer of our lives, I didn’t have internet. It was the best.
State Department talking points counter Trump’s optimistic message on Syria